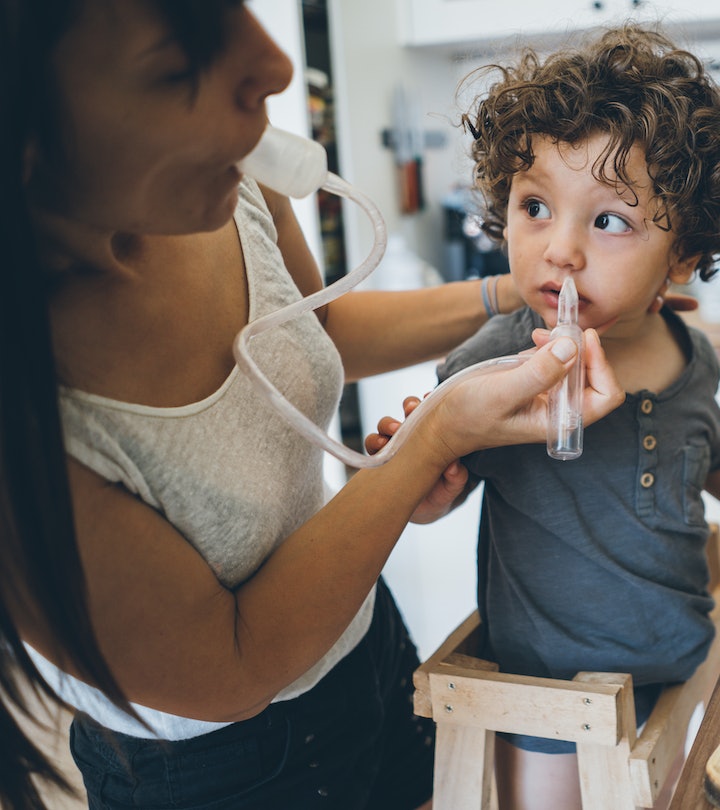 When you have children, it doesn't take long to become comfortable with all sorts of things that would've previously put you off your dinner. You’ll get peed on, you get pretty desensitized to poop, you will actively try to get your baby to fart, and snot? All day, every day. Their nasal passages are tiny and seem to make endless amounts of mucus, so you may start suctioning the little nostrils of your teeny one because they simply can’t breathe. But those little baby noses are sensitive and can get irritated. What do you do if your baby’s nose bleeds after suctioning?

Help! Why is there blood in Baby’s snot?

If you notice a bit of blood in the snot that comes out when you use a bulb syringe or Nose Frida on your baby, it's likely because you were a bit forceful with the suction, or because your child yanked their head about while you were trying to do it, because, obviously they thought you were trying to murder them after all that saline nonsense. Babies can be squirmy, and this means that the super delicate lining inside their teeny tiny little nostrils, that already tears like tissue paper, got a bit roughed up in the process. It happens to all of us. You're not a monster, even if your child is acting like you are.

What do I do if my baby’s nose bleeds after suctioning?

“Unless it's a lot of blood, in which case you should call your pediatrician immediately, you can just hold your baby over your arm like you would if they were choking, or if you were burping them, and pinch their nose shut, being sure to place pressure on both nostrils against the wall between them,” explains pediatric nurse Jennifer Katzenbaum of New York City. She notes that it normally doesn't take a lot of effort, or a lot of time to clear up.

Bleeds from suctioning are incredibly common, Katzenbaum says, and not something to be overly concerned about. Yes, it’s sad to see your baby's nose bleed, but a bit of blood in their snot is not a big deal. She notes that after the bleeding has stopped, try keeping them in a space that's well humidified, as dry areas will only irritate the nose further and lead to more bleeding. Also, you're fighting an uphill battle if your child has already found their nose. Because they will shove their little fingers in there and it will likely cause even more bleeding. I suggest, from my years of experience, dark clothing and pillowcases. Also, buy a lot of OxiClean.

Infant nose bleeds: When to call the doctor

“If the bleeding hasn't stopped in 10 minutes, call your pediatrician,” Katzenbaum adds. “Or, if your gut tells you that your baby needs attention, never hesitate to call. It is really what we are here for.” It is always OK to call and get advice if you’re worried.

Beyond that, just stock up on plenty of laundry detergent, my people. Trust me.

More Like This
How To Celebrate Baby’s First Valentine’s Day, From Gifts To ’Fits
Even If Your Baby Sleeps Better in Your Bed, It’s Still Not Recommended
Why Does My Newborn Shake Sometimes? A Pediatrician Explains
A Parent’s Guide To Stomach Pain In Kids
What Parents Are Talking About — Delivered Straight To Your Inbox

This article was originally published on Dec. 22, 2017