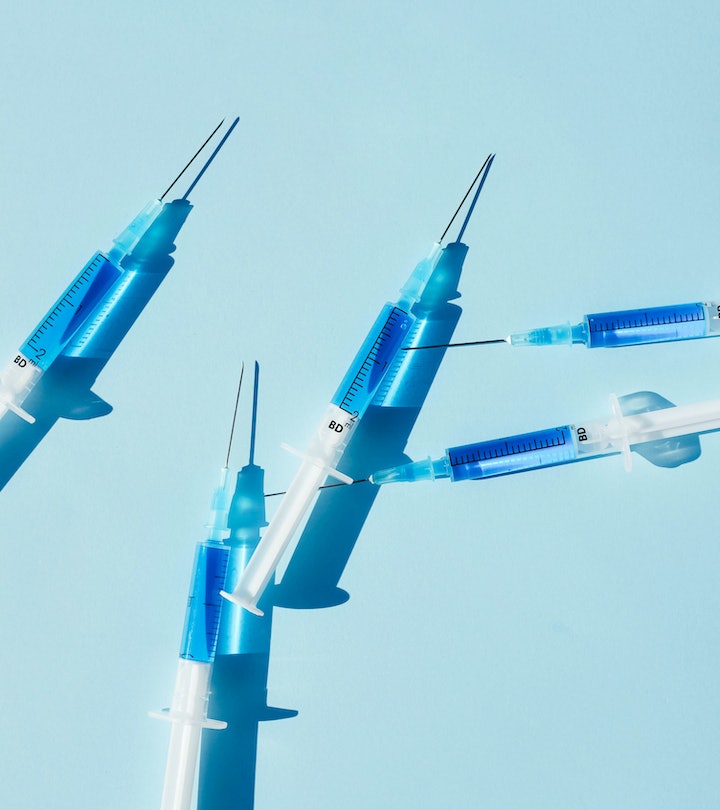 Can You Get Botox While Breastfeeding? Experts Weigh In.

Here’s what doctors want you to know.

In my experience, nothing ages you faster than becoming a parent. What used to be a clean slate across my forehead now features an array of deep lines stretching all the way across. Your eyebrows get quite the workout making faces at your baby, raising them in surprise or furrowing your brow in frustration when they won’t sleep. Some people decide to take matters into their own hands and get Botox or some other types of fillers or even plastic surgery after becoming a parent. However, if you’re breastfeeding your baby, you may take a pause and wonder if Botox while breastfeeding is safe. It may help to know exactly what Botox is and how it works before you make your decision.

Botox is a cosmetic injection that blocks certain chemical signals from nerves, which causes the muscles to contract by paralyzing them. Botox “contains purified, sterilized, and dilute botulinum toxin,” says Dr. Kelly Johnson-Arbor, medical toxicology physician and medical director at National Capital Poison Center. “Although botulinum toxin is also the cause of the life-threatening disease botulism, Botox and other medical formulations of botulinum toxin are used in very small doses that are typically associated with minimal side effects,” she says.

Can you get Botox while breastfeeding?

There are no studies on the levels of Botox, Xeomin or Dysport — the medical formulations of botulinum toxin that are currently available in the United States — in human breast milk, or of the effects of these medications on breastfed infants says Johnson-Arbor. “Because of this, many doctors will ask breastfeeding mothers to hold off on receiving botulinum toxin injections until their children are no longer breastfeeding,” she says.

In short, no — Botox injections are not safe if you’re breastfeeding.

Even the manufacturer of Botox agrees that getting Botox while breastfeeding is a bad idea. “Allergan Inc., the company that manufactures Botox, states that although the complications remain unknown, pregnant and breastfeeding [people] should always tell their doctor if they are thinking of using Botox,” says Gallus.

“The primary concern is the possibility of harmful chemicals being absorbed into the mother’s system and from there, excreted into her breast milk, which could potentially affect neonatal growth and development,” she says.

Do I need to pump and dump after Botox?

If you’re breastfeeding, you should not get Botox, so this is almost a non-issue, according to Johnson-Arbor. “Because of the limited studies on the effects of Botox and botulinum toxin on breastfeeding infants, doctors often recommend that breastfeeding women avoid cosmetic injections with Botox instead of pumping and dumping,” she says.

Does Botox go into the bloodstream?

Botox doesn’t go into your bloodstream according to Johnson-Arbor, because she says it’s injected into your muscles. “Botox cannot be detected in the human bloodstream after injection of typically recommended doses,” she says. However, while Botox is generally known to stay localized in the treatment area, more research is needed, says Gallus.

How long after Botox can you breastfeed?

What can I use for wrinkles instead of Botox while breastfeeding?

Skipping Botox doesn’t mean that you can’t do anything to look and feel your best, if that’s important to you. There are plenty of ways to care for your skin while you’re breastfeeding. “Staying out of the sun, wearing broad-spectrum sunscreen and protective clothing, and avoidance of tobacco smoke are safe and natural ways to avoid wrinkles and other signs of aging while breastfeeding,” Johnson-Arbor says. She adds that ultraviolet radiation, including sun exposure, is associated with many visible signs of aging.

“The best thing you can do while breastfeeding is to lead a healthy lifestyle: Staying hydrated, eating a variety of fruits, vegetables, and whole grains, and supplementing your diet with vitamin C, E, and A, carotenoids, keratins and omega fatty acids,” Gallus says. “These nutritious choices will not only benefit you and your baby long term, but can also help prevent or reduce fine lines and wrinkles,” she says.

The bottom line? If you’re wanting to combat wrinkles while breastfeeding, Botox is off the table.