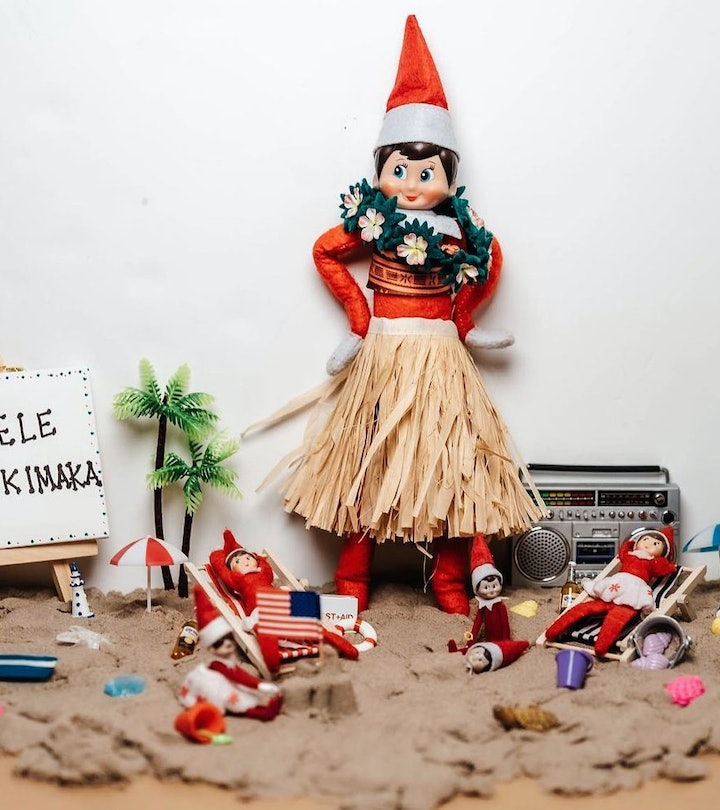 Keep it simple or go all out with these ideas.

If your Elf On The Shelf has been around for a few holiday seasons, you’re probably running out of ideas for what to do with the little pixie each night in December; it’s already sat on every surface, made a mess in the kitchen, and slept all night in the Christmas tree. Fortunately, these Elf On The Shelf pictures will give you fresh new ideas for elf season. Whether you like Santa’s helper to find itself in over-the-top, elaborate scenarios or you’re more likely to remember that you need to move the elf only after you’re finally in bed (relatable), these pictures will inspire you to take your elf game to the next level (because even the lazy Elf On The Shelf ideas are creative).

From going fishing in the toilet, to playing Jenga made from chocolate bars, or taking selfies (or more precisely, elfies) of all his late night shenanigans, these Elf On The Shelf ideas will put a smile on your kid’s face, even when they take you less than two minutes to set up (because the holiday season is busy enough without having to think of dozens of ideas). And if you need more inspiration, The Elf On The Shelf Official website also has tons of creative ideas for where to hide your elf along with some printables to make the scene come alive.

It can be very easy to reuse the same Elf On The Shelf ideas year after year, and if you’re lucky, your kid won’t notice. But more likely than not, they will, and they’ll be ruthless about it. The complaints will be vicious: “Why is Elfie so boring? He keeps sitting in the same exact spots. I don’t like playing the Elf game anymore.” It’s difficult to come up with a new idea every night after the kids go to bed. So, at the beginning of the month, scroll through these unique, original ideas, and make an Elf On the Shelf calendar to help you and your partner navigate the Elf set ups. Your kids will wake up excited and eager to find their Elf and see what trouble they’re up to each day. Plus, you’ll be extra proud of yourself for thinking outside the box. You’re basically making their Christmas dreams come true.

More Like This
22 Valentine's Day Pregnancy Announcement Ideas Sweeter Than Candy
22 Super Sweet Valentine's Day Poems For Kids
Here's What Pregnant People Actually Want For Valentine's Day
How To Celebrate Baby’s First Valentine’s Day, From Gifts To ’Fits
What Parents Are Talking About — Delivered Straight To Your Inbox

This article was originally published on November 11, 2021