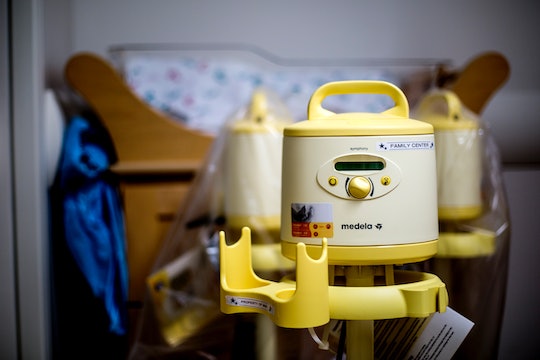 “I expect to see more wearable pumps in the future.”

Adding a breast pump to our nursery wasn’t at the forefront of my mind during my pregnancy. But a new (and very kind) mom friend gifted me a Medela breast pump that she’d never used and didn’t think she would need. This little machine that fit snuggly into what looked like a black diaper bag would become the unsung hero of my house, and the place where it sat became my most frequented area.

The history of the breast pump is a story of innovation and evolution.

Breast pumps allow dads and other family members the opportunity to feed the newborn baby, allow us mothers to work outside the home and still provide breast milk, and give us the freedom to step away from the house for any reason without totally removing the baby’s food supply. But the first pumps created weren’t made for convenience. Instead, they were made for necessity and survival. They were primarily used by medical staff for nursing moms with inverted nipples and babies who were too weak to nurse independently. This transition to having affordable hospital-grade pumps available to the public was an evolution that required a gradual metamorphosis over many years. After I learned how much breast pumps cost, I was even more surprised and grateful that I was given one. And considering the price now, it’s no comparison to the thousands of dollars hospital-grade pumps cost when they were first released to be used by moms at home in the 1990s.

A large number of inventors contributed, both with intricate changes and larger mechanical structural shifts, to the system of breast pumping that we experience today. Here’s how and when some of those shifts took place that reflect just how far pumps have come.

Initially, breast pumps were made of glass vials, but when Orwell H. Needham received the first breast pump patent in 1854, he used rubber vials for a more comfortable experience and to better match the sensation of a baby nursing, according to The Atlantic. After being slightly modified over time, Joseph H. Hoover took it a step further. In 1898, he added a spring to the vacuum technology so the suction would be more gentle, or as he is documented explaining his invention was, “to provide a breast-pump not so sudden in its action as to produce pain when the breast is distended and sore and at the same time produce a continuous flow of milk accompanied with the pulsating movement which occurs when an infant is at the breast.”

I can’t help but think that if a female had been a part of this creation process, comfort would have been a priority from the start.

“Most breast pumps were using open systems like one of the most popular breast pumps, Medela. This potentially exposed the milk and the pump to bacteria,” Krystal Duhaney, founder of Milky Mama, tells Romper. Companies took notice of this, and the newer pumps, according to Duhaney, are made with a closed system that keeps pumped milk and other particles from getting into the tubes or pump motor.

Breast pumps can cost up to $500 depending on the quality and brand. However, certain pumps, like Medela and Spectra, can be covered by insurance. This is a leap from the thousands of dollars it cost to own one in the 1900s because they were only common for hospital use at that time. If a mother couldn’t afford to purchase a pump, she could to rent and return it, which was also expensive.

Today, pumps can cost as little as $55 for a manual one.

Initially, pumping was a slow and long process, but in 1928 Woodard Colby invented a pump that went at a much faster speed. Over time pumps have offered a range of speed levels allowing you to choose how fast (or intense) you want the suction to be.

“A lot of pumps now have customizable features, even all the way down to the suction based on per breast. So you could have one speed on one breast. Then the other one, you could have a different speed depending on your specific anatomy or pumping routine,” says Duhaney.

The desire for nursing mothers to have more convenience has pushed the innovation of breast pumps through the years. One of the most significant changes came in 1874 when removable bottles, called milk collection vials, were added to the mechanical pumps. And we can still appreciate that convenient feature - especially when you have a heavy letdown.

But Spectra changed breast pumping experience by creating the first personal hospital grade pump. By the 2000s, breast pumps were becoming a staple for nursing mothers.

With convenience as a driving factor, Duhaney says, “We've seen the wave of wearable breast pumps like the Elvie and the Willow, where we previously just had one option. Companies are realizing that a lot of parents don't have time or aren't given the proper accommodations at work to pump. They keep in mind that some employers aren't giving moms time to pump, or as an alternative for the parent on the go that doesn't have time to sit down at home.”

To keep from getting discouraged while trying to pump and continue to provide your body’s milk for your baby, Duhaney suggests going with a breast pump that has a hospital-grade motor.

“With a hospital grade motor, not only is the suction stronger but they usually work a little faster as well. This is very helpful for the parent that’s suffering with a lower supply. If you have a pump that isn't working as well or doesn't have as strong of a motor, not only can it be not productive, which could continue to contribute to milk output issues, but it can also be very discouraging if you're pumping for a longer period of time without very many results when you could possibly pump with a stronger pump or with the hospital grade motor and see more milk faster. Even if the output is the same or if you still suffer from low supply, it can be more encouraging if you're getting that amount faster instead of spending 45 minutes just to get an amount that’s not enough to feed your baby.”

Breast pumps are being created smaller, sleeker, easier to conceal, and less of a headache to use. It’s always a benefit when we can feed our babies with less hassle, and keep it moving.

More Like This
Can You Mix Breast Milk & Formula? Experts Weigh In
15 Weird-But-Genius Products For Breastfeeding Parents
13 Nursing Bras & Pumping Bras You'll Actually Love To Wear
If Breastfeeding Makes You Tired, Here’s How To Keep Your Energy Up