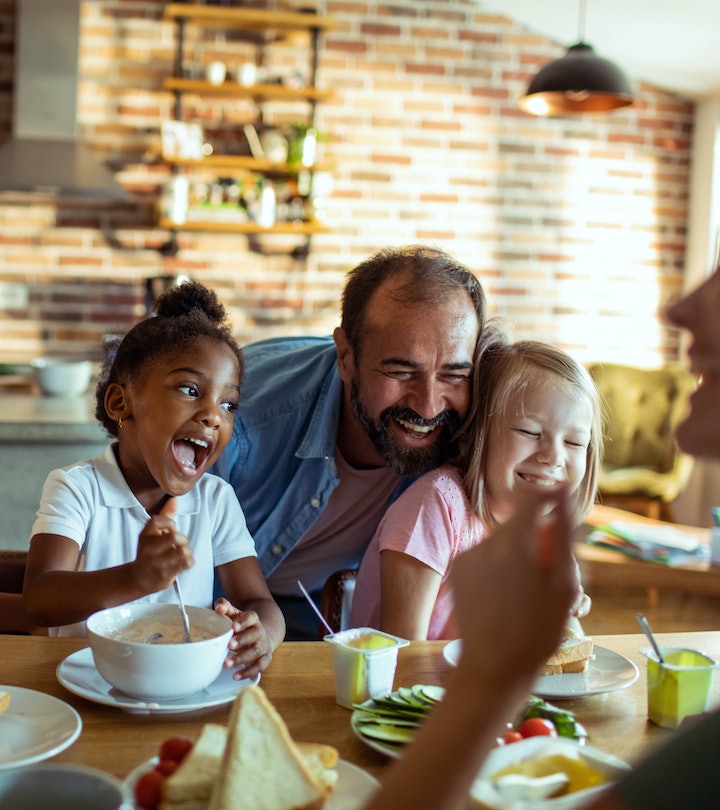 Tips To Co-Parent With A Stepparent Successfully

Stepfamilies have a different dynamic to navigate.

Successfully co-parenting, even with another parent who shares your basic values and temperament, can be hard enough. But the question of how to co-parent with a stepparent (and successfully at that) can be extra tricky. First, there’s just the fact that when there’s a stepparent involved, there are probably at least three adults who have to get on the same page: The stepparent, the stepparent’s partner, and the child’s other parent (who may also have his or her own partner, bringing the total to four). Add in having to deal with stepsiblings and there are just a lot of of moving parts. And kids, who are already experts at playing two people off each other (but Dad said I could!) now have even more people to claim gave permission for whatever it is they want to do.

In addition to the logistics, there’s also the fact that the kids might have some lingering hurt feelings or distrust of their stepparents, particularly if their other parent does. Finally, there’s just no clear playbook for how blended families are supposed to work. In The StepMoms Club: How to be a Stepmom without Losing Your Money, Your Mind, or Your Marriage, Kendall Rose writes that stepparents “often don’t have a clear understanding of what their role is, and they don’t define the boundaries of that role.” But a few ground rules can help make this transition, if not seamless, at least manageable, for everyone involved.

What boundaries should parents and stepparents have?

“I always caution parents to take it slowly... making sure that you know a new partner really well, maybe even as friends first, until it becomes clear that it’s likely to be a long-term committed relationship before you introduce them to your children,” says Dr. JoAnne Pedro-Carroll, a clinical psychologist who has worked with children and families for 35 years and wrote the book Putting Children First: Proven Parenting Strategies for Helping Children Thrive Through Divorce. Also, she says, don’t assume that because you think your new partner is fabulous that your children will feel the same: “There’s a myth about forming new relationships — that if parents are happy with each other, and newly in love, then of course that will equal all the kids being happy with that. And that’s really an unrealistic expectation. The primary parent should take care to have quality one-to-one time with their child, and affirm for the child that 'The love I have for you is never going to end. You will always have your special place in my heart.’”

In addition to taking it slow and not expecting anything close to an instant bond between children and stepparent, it’s important for a child’s primary parent to continue to take the lead on setting the ground rules for the family and being a disciplinarian. “If anything, I think a healthy boundary and role for a stepparent is to support the children’s primary parent in having healthy limits,” she tells Romper. As a stepparent herself to four bonus children (now adults), Pedro-Carroll said that she thought of herself “as a behind-the-scenes person who is providing support that makes a big difference.” You want to avoid a dynamic, she explains, where a stepparent is coming in and saying “I’ll roll up my sleeves, I’m going to fix these problems, I’m going to make sure there’s a schedule, this is the way we’re going to celebrate holidays.” That can be well-intentioned — a stepparent might be crossing boundaries in order to create stability for the family and the children — but ultimately taking it more slowly is likely to lead to that long-term stability and peace that every stepfamily (and every family) wants to find. One crucial boundary, she says, for both a stepparent and the primary parent is to never, ever say anything negative about the child’s other parent. “If anything,” Pedro-Carroll says, “do your very best to foster kid’s healthy relationships with all the adults in their lives.”

What are some tips for a successfully co-parenting with a stepparent?

There’s no one-size-fits-all advice for stepfamilies — there are so many variables depending on the age of the kid(s), their temperament, and their personality. Lizz Dawson, who is a stepmother to her partner’s 3 children (now ages 18, 15, and 9), discovered that developing a successful co-parenting relationship was different for each child. The middle child trusted Lizz right away, but the youngest, she said “was very clingy with his dad, and I had to get his trust in a different way: by showing him ‘I’m not going to take your dad away from you.’” Her oldest stepchild, she said, gained a lot of trust in her when she started showing her own personality. “I struggled with that in the beginning, and I wanted to be who they wanted me to be, or I’d compare myself to their mom a lot. The more I’ve become myself, the more the oldest one trusted me.” She advises parents to remember that, if you feel like you’re being fake, or putting on a role, kids are likely to pick up on that: “Kids are incredibly intuitive. They know when you’re sincere, they know when you’re being yourself, they know when you feel uncomfortable — and that affects them more than I ever realized it would,” Dawson says.

In addition to working to build a foundation of trust — which may look different in every situation and with every kid — Dawson echoed some of the same things that Pedro-Carroll said about having the primary parent take the lead on setting rules, disciplining, and making major family decisions. However, the stepparent can often be an important behind-the-scenes person: “A stepparent is more objective and can see dynamics that have already been created that the parents might not even notice because that’s always how it’s been.” When she brought up with her partner that she thought there was too much screen time in the house, he took the lead on cutting it back, even though he was actually following her lead. “It’s a balance of pointing out what you’re noticing but also being like “OK, I’m not the parent, I need to step back,” she says.

Although there’s plenty of opportunity for things to go haywire, when parents and stepparents work to co-parent together, it can be a wonderful thing for kids. “We hear too often about the terrible stories — about how things can go really badly. But there’s so much good news about how to navigate those changes,” Pedro-Carroll says. “One of the greatest joys I have is the close relationship I share with each of my bonus children.”