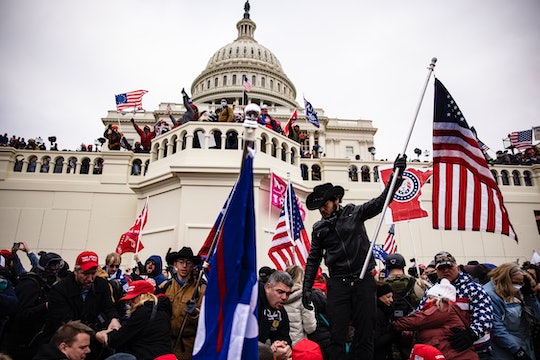 How To Explain The Breach At The Capitol To Your Kids

They have questions, even if they're not asking them.

In the midst of the electoral count at the Capitol to certify former Vice President Joe Biden’s victory as the 46th president of the United States yesterday, a pro-Trump mob breached the building. The ensuing chaos saw lawmakers race into hiding, insurrectionist vandalism, and resulted in the death of at least four people. As the nation grapples with the reality of this scene, children are likely asking questions. Here’s how to explain the breach at the Capitol to your kids.

Dr. Patricia Bundy, Ed.D., a marriage and family counselor in Virginia, tells Romper that the first thing no parent can ignore is that little ears are everywhere. If you think your child doesn’t know what happened, you’re probably wrong.

“Kids are going to have heard parents talking about this and they will likely have seen images too,” says Bundy. That doesn’t mean you should chastise yourself for allowing your kids to be exposed to this event. Instead, it’s a reminder that you can’t, and shouldn't, sweep the Capitol attack under the rug. You’ll do more for your child’s mental health by addressing the issue face on than pretending it never happened.

But before broaching the subject, take a moment to check in with your own feelings. Dr. Robin H. Gurwitch, Ph.D., a psychologist and professor of psychiatry and behavioral sciences at Duke University, says that “parents need to have somebody they can talk through their own emotions and thoughts and concerns about the incident.” When experiencing a scenario such as the Capitol coup, it's important to realize that how they react will affect their kids, and if they seem scared or angry that could exacerbate their children’s own reactions.

That said, telling your children that you also feel sad, or frightened, or worried is fine. And (write this down) it's OK to tell your children you don't have all of the answers. The key to talking about tough stuff like this is being honest and inviting children to share their emotions.

“I think it’s really important that as adults we start the conversation,” says Gurwitch. “If we wait for our children to come to us, to say ‘I have a question about what happened yesterday,’ they may not do so because they feel like the situation is so bad they shouldn’t even talk about it. Or maybe they don’t want to upset you.”

And instead of just shutting off the TV immediately, both Gurwitch and Bundy say now is an opportune time to filter your child's media exposure instead.

“Children should not binge-watch disasters or terrorist events as they unfold,” says Gurwitch. Limit their viewing and if they are going to see something on TV, sit and watch it with them. Then turn it off and ask, “What are your feelings about all of that? Do you have any questions?”

This opens the door for open discussion. "Young children often have their facts not quite right,” cautions Gurwitch, so it's your responsibility as the parent to view your child's understanding of the situation through their eyes.

The next step, says Bundy, is to reassure your child. “You need to make sure they feel safe,” she says. To that end, Gurwitch says that validating children's emotions will help them feel heard, seen, and protected.

“You can say ‘Yes, it was scary to see those people really angry. Yes, it was confusing. It was sad,’” says Gurwitch. “‘But I want you to know you are safe. That is my job and I’m going to do everything to make sure we’re safe. These people are not coming to our house and they’re not coming to your school or day care.’”

You can also use this event as a teachable moment, says Bundy. For instance, now is a great time to talk to children about the right ways to handle big feelings. You can ask your child, "Is violence ever the way to handle things when you’re upset?” “Should we ever break other people’s property?” These prompts can help remind children about the right ways to treat one another.

Then be sure to translate your words of reassurance into actions. Explain how when you get upset you might go pet the dog, or call a friend, or take a walk. Demonstrate healthy ways to deal with stress so your child has a foundation of how to handle their own feelings.

“Give them the tools to handle these things within their own family framework,” says Bundy.

“This will set up a foundation that you’re available to talk about the hard stuff,” adds Gurwitch. “Do it when they're young and it will continue as they get older.” And understand that one quick chat won’t likely be the end of kids' questions and concerns about this instance or others that may happen in the future.

If a child appears to be still carrying their worry around, Gurwitch urges parents to be mindful, extra patient, and give additional love. “I promise, it will pay dividends,” she says.

And if we’ve learned anything from the horrific events of this week, let it be that words matter. They matter to adults and they absolutely matter to children. So use your words wisely. And when children have questions about words they hear, help them learn them in words they can understand (see our glossary below).

More than anything, the experts say, if a child continues to show concern or trauma from this event or others, don’t hesitate to seek out mental health help. “Don’t wait. Reach out. There are exceptional services available for even a very young child,” says Gurwitch, a trainer with the iCare Collaborative, a program that aims to enhance child-adult relationships and difficulties big and small. “It’s OK to ask. That’s how we all grow and learn.”

First things first, it's important to recognize that your child may not know the meaning of many of the terms they're hearing in the news. Below is a glossary of terms with definitions young children can understand.

Coup: is when people don’t like the leaders of a country and they decide the only way to handle that is to go and get them out, oftentimes using violence. They try to go and take over so those leaders can’t lead anymore.

Insurrection: means when a group of people decides they’re going to decide what’s best even if everyone else doesn’t agree.

Riot: is when a group of people gets upset and acts together to create chaos, sometimes by throwing things and shouting things and going places they shouldn’t be.

Anarchy: is when people decide to no longer follow a leader or the laws.

Democracy: is what our government is. It means that all of the people who live in America help decide our laws, rules, and who gets to be our leaders.

Liberty: means you have the power to make your own choices.

Leadership: is the word we use for all of the people, leaders, who are in charge.

National Guard: these are men and women who serve all of the people in the United States to protect them, sort of like police officers.

Republic: is a nation where people vote on their leaders to represent them and what they want for their country.

Siege: means when a group of people surrounds a place to try to take control of it.

Patriot: is a person who shows a lot of love and excitement for a country.

Incite: means to encourage other people to make bad choices.

Concede: means admit or surrender to something. For instance, if I stole a cookie and got caught I might have to “concede" to my parents that I stole it.

25th Amendment: means that if the president becomes unable to do his job, the vice president takes over.

Impeachment: is a process that our government leaders use to decide if charges (what someone is accused of doing) against someone are true or false.