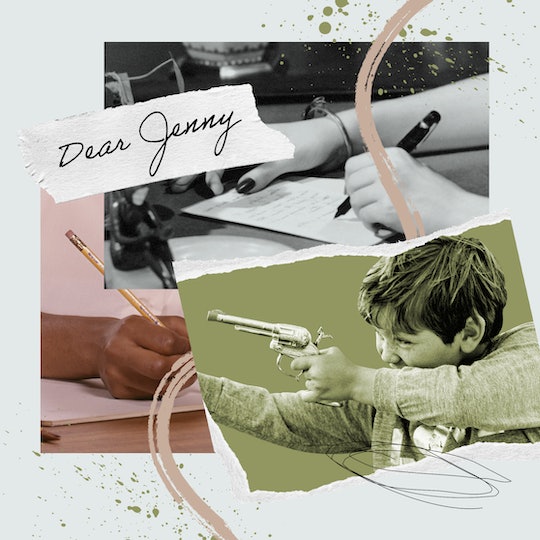 Dear Jenny: Is It Bad To Let Kids Play "Guns"?

Should I be correcting this behavior, letting it go, or… ?

I grew up in a rural area where hunting was a part of the culture. Everyone had a rifle; everyone had a shotgun. Deer season was an opportunity to interact with your neighbors, to check in about tracking and to share meat. It involved a lot of mutual respect, about other people's property, the animals we were stalking, and guns. We learned gun safety in school, and my family had a gun case in the basement that was always locked.

So I'm not sure why, when my 3-year-old suburban daughter walked in from preschool, pointed a stick at me, and said, "I'm shooting you, Mommy," I froze.

She wandered off to have a shoot-out with the dog and then devolved into her afternoon routine of begging for animal crackers. I checked in with my partner later, but he just shrugged. I'm trying to sort out my feelings. Should I be correcting this behavior, letting it go, or … ?

You needed a moment after your precious toddler, for whom you have sacrificed much and whom you love more than anything, pointed a "gun" at you and pretended to shoot you? Join the club.

Pretend violence has been in our home since our son, also 3, could talk. His conversations with stuffies and imaginary friends end in explosions and threats of violence. Lo, the many times a day I am approached with a length of string and informed not that only that my son is "evil" (face scrunched in an "evil" way) but also that I am being hauled off to "jail" (where I am lavished with pillows and pretend meals). He brandishes a plastic sword whose handle melted in front of the floor vent, and although we have no toy guns, he has fashioned them from everyday objects, including, yes, sticks.

"Children want to experiment with boundaries and power, even at play," says Deborah J. Cohan, Ph.D., associate professor of sociology at the University of South Carolina-Beaufort and author of Welcome to Wherever We Are: A Memoir of Family, Caregiving, and Redemption. "Children look to adults in jobs that look important and want to emulate people in those roles—for example, police, firefighters, pilots. These are jobs where people are uniformed, are armed with lots of paraphernalia, and seem to exert some power."

So the problem is not with gunplay per se, says Julie Fellom, a longtime preschool director in San Francisco: It's when "we pathologize gunplay."

"Three-year-olds are into magical thinking," says Fellom, whose graduate research focused on aggression, power, and play in 4-year-olds. "But 4-year-olds have more of a sense of agency, so they believe they can make themselves more powerful." Guns put a distance between shooters and victims, making kids feel powerful without making them feel vulnerable. Fairy wands work in the same way, says Fellom: "Anything that gives them a sense of agency with the protection of distance — a cape, or magic powers — is a go-to for preschoolers. They handle their fears by becoming more powerful."

"I would make whole wheat bread every week and they would chew their frigging toast into guns!"

Guns may be a cultural choice. For example, kids who grew up near military bases or during wartime might have played "army," and those who grew up in the era of Westerns on TV might have played cowboys and "Indians" (unfortunately, racist representations of Native Americans have not changed much in the intervening years). In France, where Anne Desgranges, a mother of two now living in Pompano Beach, Florida, raised her children, no such TV shows were popular, and no such games were played.

"But if we are reductionist about this," says Fellom, "and we think it's either cultural or developmental, we miss something else."

Both Fellom and David Bolt, a retired filmmaker and educator living in Sebastopol, California, recalled raising kids in "collectives" in the United States. in the 1970s where gunplay was "strictly verboten." Says Bolt, "We were all political radicals, and we tried to raise the children in the house with non-gendered, anti-war, anti-violence, feminist beliefs. It was a recurring problem that the male children in the preschool to elementary school age range were forever playing 'army' against our wishes, shooting at each other with tree branches or any other object that remotely resembled a gun."

Same, says Fellom: "I would make whole wheat bread every week and they would chew their frigging toast into guns!"

Not to worry, says Cohan: "There is not an easy causal path between pretend guns and violence in children. The most important thing is to evaluate the accompanying behavior to determine how aggressive, hostile, and hurtful it is. We should be concerned if we see children unable to separate reality and fantasy, where the lines become so blurry that they rely on aggressive and bullying behavior to resolve real-world conflict and to make their voices heard. It is all about context."

We need to be a lot more concerned about children's attitudes, behaviors, and meanings attached to the toy guns and pretend guns than the toys and symbols themselves.

But the rules are different at Fellom's preschool, where kids are allowed to play with sticks but not allowed any gunplay, including "pew-pew with a water hose." This prepares them for school in the U.S., she says, where "there are rules about guns in schools across the whole United States. I say, 'When you go to big school, there is absolutely no gunplay allowed. If I want to be a good teacher, I need to tell you about this rule.'"

(Understanding the disparity between White kids and Black and Brown kids being disciplined in schools, especially when it comes to zero-tolerance policies, and the connection between zero-tolerance policies and the school-to-prison pipeline, some educators are pushing for a more child-development-focused approach to pretend gunplay, which they understand as normal.)

"We need to be a lot more concerned about children's attitudes, behaviors, and meanings attached to the toy guns and pretend guns than the toys and symbols themselves," says Cohan. "Parents serve themselves and their children well by being keen observers before intervening or banning something. They might ask questions to their children about what is fun related to pretending something is a gun."

So, Bang Bang: Recognizing your physical response is key, as is acknowledging your background and culture around hunting. This could be the time to begin exploring the issue of guns with your daughter in an age-appropriate way. Perhaps, as Cohan recommends, you could ask questions (for example, "What happened at preschool today that you came home 'shooting' a 'gun'?"). Also, it's key to recognize what you're not OK with — and if you're not OK with your daughter pointing a pretend gun at you for any reason, set that boundary. For example, say, "People are not for shooting" (and if the "gun" gets pointed at you again, say, "The gun is not being safe right now, so it has to rest," and put it away). You can also go more in depth and explain that the behavior makes you uncomfortable, because in real life, guns hurt people YES THEY DO NRA YES. THEY. DO.

Also, if hunting will remain a part of your family culture as your daughter gets older, you might begin familiarizing her with your values — and the issue of safety — before other family members get to it first.

Finally, pretend gunplay is a reminder that kids are curious about guns from a very young age, so kids and real guns should never be in the same place at the same time (which means checking in with other parents when your kid is in their homes).

WHEN IT COMES TO KIDS AND PRETEND GUNPLAY, DO WHAT IS RIGHT FOR YOUR FAMILY AND YOUR VALUES. NO RESEARCH SHOWS A CAUSAL CONNECTION BETWEEN PRETEND GUNPLAY AND VIOLENT BEHAVIOR IN CHILDREN, BUT KEEP A LOOKOUT FOR WARNING SIGNS THAT ARE INDICATORS OF A LARGER PROBLEM, WHICH CAN APPEAR DURING GUNPLAY. YOU GOT THIS.