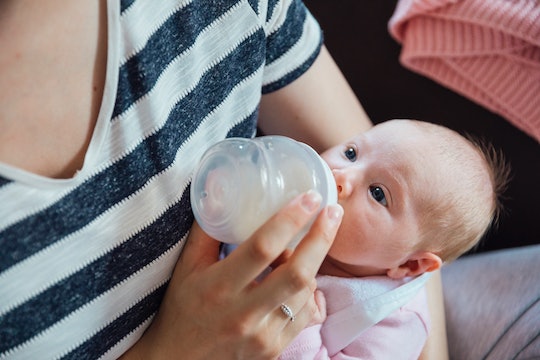 Here's What Parents Need To Know About Oat Milk

From faux meats to a variety of nut butters, there's no shortage of alternatives for those suffering from food allergies. This is especially true for the lactose intolerant bunch, who have almond milk, rice milk, soy milk, and a variety of others to choose from. A somewhat "up and coming" option is oat milk, which is gaining popularity. But is oat milk safe for babies? As with any substance, there are a few things new parents should know before feeding their baby this alternative.

Oat milk — or oats that have been soaked in water, blended and strained — is just as safe as any other milk alternative. Registered dietitian Kelly R. Jones M.S., L.D.N. tells Shape, "Oat milk is a good choice for anyone who is allergic or intolerant to dairy and/or nuts, as well as those looking to limit saturated fat in their diets." The choice of oats, she adds, is a good option for those with a gluten intolerance, too, though you should be sure the label reads "certified gluten-free" on the packaging, in the event you have celiac's disease or a gluten sensitivity.

But is this alternative OK for babies to consume? According to BabyCenter, you should wait at least 12 months before you introduce cow's milk to your child, since babies can't digest cow's milk as easily as they can digest breast milk or formula. Once your baby surpasses that 12-month mark, however, it's recommended that your child receive eight to 12 ounces of cow's milk, according to the American Academy of Pediatrics. By the time your child is 2, they should be receiving 16 ounces, or 2 cups, of cow's milk or other milk products every day. But in general, according to The Bump, milk alternatives contain fewer calories and protein than cow's milk. So while an alternative like oak milk is healthy, you should consider how those alternatives are fortified and whether or not they're capable of meeting your child's dietary needs. For example, according to a recent study published in The American Journal of Clinical Nutrition, children who drink milk alternatives may be shorter than children who drink cow's milk.

Bon Appétit hails oat milk as "the drink ready to dethrone almond milk," but what, exactly, is all the hype about? Well, the magazine describes the taste of oat milk as a "warm, thin layer of cream that sits atop a bowl of porridge." With its sweet, grainy flavor, locals in Södermalm, Sweden praise it's ecological and cost-effective benefits that allow you to drink "milk" guilt-free. So, if you have a particularly picky toddler who has texture preferences, oat milk might just be an easier sell than regular milk.

Taste aside, the health benefits of drinking oat milk are somewhat extensive. According to The HuffPost UK, oat milk has more Vitamin B than soya or coconut milk. And because oats naturally contain beta-glucan — an agent that stimulates the immune system — it's said to help consumers maintain a normal blood pressure. The website ParentingHealthyBabies.com says that not only does this "super" milk help boost immunity on a cellular level, it could help promote a healthy heart, too. Oats are naturally low in fat, cholesterol-free, calcium-rich, and easily digestible, making oat milk one of today's up-and-coming choices for milk alternative connoisseurs.

In a study that determined whether or not oat milk can be used as an acceptable milk alternative for those looking to lower LDL cholesterol numbers, 24 men and women consumed oat milk, soy milk, and cow's milk so researchers could observe their plasma lipids, glucose, insulin, and antioxidant levels. The results in those who consumed the oat milk showed "decreased plasma cholesterol by four percent," and, "LDL cholesterol at nine percent." According to a study published in Nutrition Reviews, whole oats are high in antioxidants and polyphenols. In other words, it is healthy and can aid some consumers in maintaining their health and wellness.

Whether or not you're ready to take the leap to the world of oat milk, there's no doubt it's healthy and safe for your toddler to consume (assuming they don't have any other dietary restrictions that could complicate the issue). But it's worth noting that nutritionist and registered dietitian Maya Feller, RD tells WellAnd Good.com that one alternative milk isn't necessarily better than the other. "Real ingredients are easier on your digestive system than anything synthetic or processed," she says.

As always, you should discuss introducing any substitutes with your child's pediatrician before introducing them to their diet.