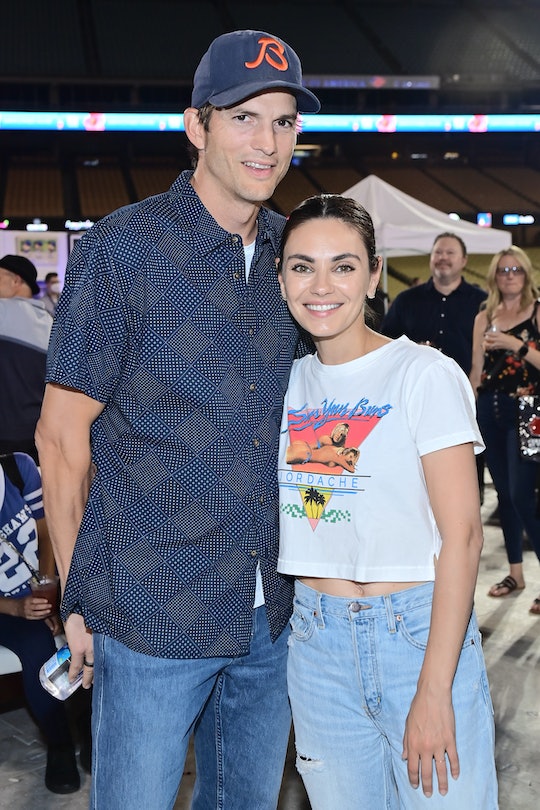 Leave it to Mila Kunis and Ashton Kutcher to again win the title of one of the most down-to-earth couples in Hollywood. The playful and genetically blessed duo are not just former co-stars, but co-parenting superstars who are even willing to talk about bodily functions in their family of four. Kunis recently sat down for a TV interview and revealed that she and Kutcher have an open-door bathroom policy with their two kids who knock on their door every two seconds. As the saying goes, if you can’t beat ’em, join ’em.

The Luckiest Girl Alive star chatted with E! about the great relationship she has with her partner, parents, kids, and brother, too. But when asked by the interviewer about the one thing she vowed she would never do (but now does shamelessly), Kunis gave a awesomely-TMI answer that every mom on Earth can understand.

“Honestly, our doors are always open in our house,” the actress revealed. “We have no closed doors in our house. That includes the bathroom.”

“For better or for worse as a family, the kids have embodied bodily function as a very standard norm,” she continued.

“I’d never thought that I would be the person that was able to go to the bathroom with the door open,” Kunis explained. “It doesn’t matter if I close it. It never made a difference.”

Seems like 7-year-old daughter, Wyatt, and 5-year-old son, Dimitri, would knock on the door anyway. “Well forget it, just keep the door damn open,” Kunis offered as a surrendered solution to her lack of alone time.

The Family Guy star has been sharing a lot about her adorable little family recently. In addition to hygiene habits, Kunis also peeled back the curtain into her famous relationship and spilled a little tea on Kutchers’s love of an adult beverage. Turns out, it played a major role in one of their romantic milestones.

It all started when Kutcher overshared an anecdote about being a bit over-served. Apparently tequila was the liquid courage he needed when Kutcher first told his wife he loved her. In a recent TikTok, the Your Place or Mine star huffed and puffed on a Peloton treadmill and spilled the beans to his country-singing workout buddy. “Kenny Chesney = GOATed wingman 💘,” Kutcher captioned the video.

In a recent interview with Entertainment Tonight, Kunis did in fact confirm that her husband was buzzed when he first uttered those three words. “It really happened,” the mother of two said. “Oh, I remember that night.”

“I didn’t have tequila. I was sober and I was like, ‘Oh my god.’ It happened, guys,” she continued.

Whether they’re opening bathroom doors or opening up about their relationship history, we hope Kunis and Kutcher continue to keep these BTS revelations coming.