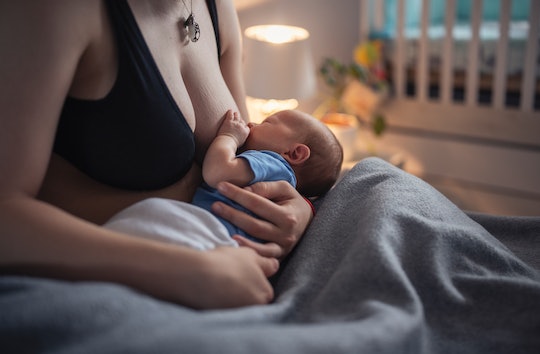 Here's Why Some People Feel Like Throwing Up When They Breastfeed

It’s unfortunate, but it happens.

Is there anything that looks as tranquil and picturesque as a parent nursing their tiny baby? It's basically the apex of peaceful images. But once you become a breastfeeding parent for the first time, you quickly realize how very complicated and physically uncomfortable it can be. There are few things in the world more natural, but that doesn't mean the mechanics of it come naturally. Breastfeeding has the potential to bring all sorts of challenges: Soreness, cracked or bleeding nipples, clogged milk ducts, mastitis, and thrush are all ailments familiar to many nursing parents. But can breastfeeding make you nauseated, too? Experts break down why you might feel like throwing up while nursing your child.

Why does nausea while breastfeeding happen?

Some people do experience nausea when breastfeeding, and it is most likely related to the release of oxytocin in the breastfeeding parent’s brain. Oxytocin, sometimes called the "cuddle hormone," is the hormone that makes you feel happy and content when snuggling your little one. "Some women feel nausea when they get that rush of oxytocin," lactation consultant Sara-Chana Silverstein explains. While it is ironic that the same hormone could make you feel ill, you’d never want to live in a world without oxytocin. Newborn life is not for the faint of heart, and you need all the warm and fuzzy feelings you can get.

Although oxytocin is the most likely culprit of your breastfeeding nausea, there are other possibilities as well. Amanda Ogden, IBCLC and director of lactation services and education at The Mama’hood, explains that fatigue or hunger may cause a parent to feel nauseated while breastfeeding. When this is the case, Ogden says simply having a healthy snack on hand can alleviate your discomfort.

Alternately, Silverstein notes that sometimes people who have large cracks on their nipples can actually get nauseated from the pain. While it sounds awful, she swears it is easy to remedy: Fix the latch and the nipple heals, along with the nausea.

Most breastfeeding nausea will resolve itself after the first six to eight weeks, so if your baby is well past the newborn stage and you suddenly begin feeling sick to your stomach while nursing, it might be time to take a pregnancy test. While breastfeeding does often delay the return of fertility, it is not foolproof and should not be relied upon as birth control. So, it’s worth taking a test just in case you might be pregnant again.

For a small percentage of people, simple explanations like oxytocin, hunger, or pregnancy are insufficient. There is a condition known as dysphoric milk ejection reflex, or D-MER, that some people unfortunately suffer from. “Dysmorphic milk ejection reflex is a syndrome characterized by an onset of symptoms that occur when a woman experiences a ‘letdown,’ or flood of oxytocin, that accompanies the milk ejection reflex when lactating,” explains Demi Lucas, IBCLC and senior patient care coordinator with The Lactation Network. “This condition typically causes a person to experience different side effects that have a range of severity,” Lucas continues. “From emotional responses (depressed [or] anxious feelings to physiological, causing nausea or ‘making one's stomach turn’).”

It's important to note that D-MER does not cause nausea directly, and nausea alone is rarely a sign of D-MER. “Research has shown that D-MER is physiological, not psychological, which means that it is not past experiences or repressed memories that cause it,” Lucas tells Romper. “D-MER occurs as a result of inappropriate dopamine activity when the milk ejection reflex is activated.”

As Ogden adds, "Although nausea is not the hallmark symptom [of D-MER], it may come as a side effect of anxiety."

How common is nausea after breastfeeding?

While pregnancy nausea (affecting up to 70-80% of pregnant people) is far more common than nausea during breastfeeding, according to Lucas, it still happens fairly often. “It's common for breastfeeding parents to feel nauseous on and off,” she says, “especially at letdown, in the first few weeks due to hormone fluctuation.” She adds that as many as 9% of breastfeeding parents experience D-MER, and of those 9% who reported symptoms, 8% recalled having nausea.

Treatment for nausea while breastfeeding

Treatment for breastfeeding nausea will depend on what’s causing it. “Mindfulness techniques, deep breathing, distracting themselves during nursing, aromatherapy, light snacking, or drinking during letdown can be beneficial in managing symptoms [of nausea],” Lucas tells Romper.

Silverstein says she gives her clients who are experiencing breastfeeding nausea an herb to take right before they nurse. Eventually, she explains, it goes away as a the body gets used to the boost of oxytocin eight times a day.

A well-educated lactation consultant or doctor can talk with you about what you are experiencing and decide together how to best support you, so if you are struggling to breastfeed (or know of someone who is), don't be too nervous to reach out for help.

Amanda Ogden, IBCLC and director of Lactation Services and Education at The Mama’hood

This article was originally published on Feb. 21, 2018