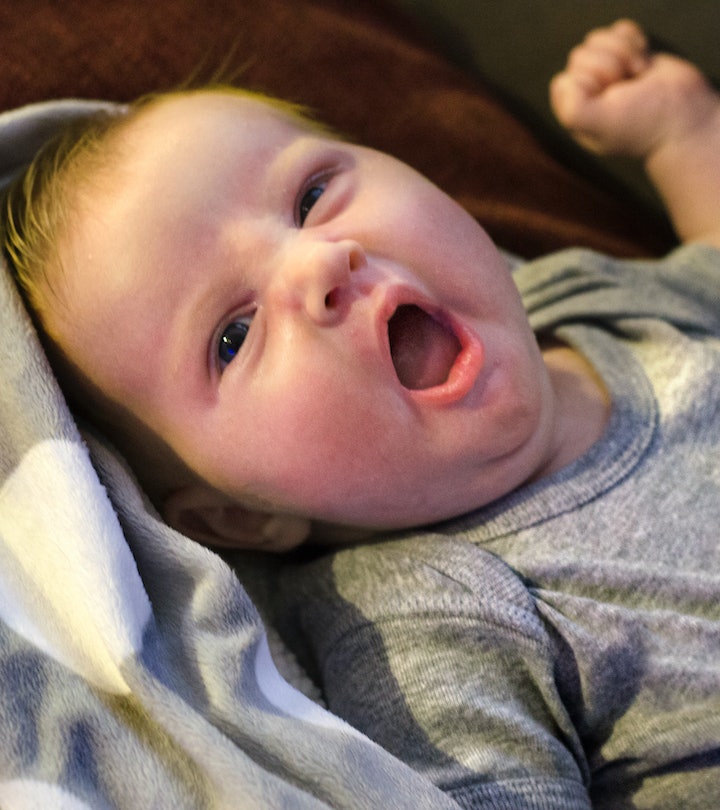 Here's Why Your Newborn Is Grunting Like A Little Piglet

There is some significance to those sounds.

It’s after a feeding, and you’re gazing adoringly at your newborn. From their sweet smell to the way they’re so incredibly cuddly, your baby is just absolute perfection, sleeping peacefully — until all of a sudden, they let out a startling, short, deep noise that somewhat sounds like a cross between a camel and a pig, but it’s just newborn grunting. If you’re wondering why your newborn baby grunts so much, there are a few reasons why.

For someone so tiny, newborns definitely do make their presence known in a big, boisterous way. “Babies, especially newborns, can be noisy little things,” pediatrician Dr. Denise Scott, M.D. tells Romper. “Because they can't verbalize yet, they make their presence known by crying, squealing and even grunting.” It’s true: grunting is one of the earliest forms of communication, according to a PubMed study. But if you’re guessing as to what each grunt from your gorgeous newborn means, here’s a list of reasons for newborn grunting and what you can do to make them feel more comfortable.

As it turns out, grunting is your little one’s love language. Without words, your child will give out a grunt or two when they want to make their presence known or communicate basic needs to you. “Newborns grunt as a means of communication,” Dr. Alison Mitzner, MD, a pediatrician and author of Calm and Confident Parenting, tells Romper. “As they learn to squeal, laugh, and yes, grunt, it’s their way of connecting with you.” So even though the grunting might be a bit off-putting, it’s actually your baby’s way of letting you know that they love you.

As they settle down to sleep, newborns have been known to make some rumbly grumbly sounds, one of which is grunting. While they might be happy with a belly full of milk, it’s most likely a physiological reason why they grunt before going night-night. “Newborns have nasal passages that are so small,” explains Dr. Mitzner. “When breathing through their nose, you can hear all sorts of sounds that are not of concern if they are otherwise breathing well without distress.”

Have you ever had a really, really good workout that caused you to groan? Well, your newborn feels just the same about a good stretch, and as such, might groan as a result. Grunting in a newborn can be concerning to new parents but the good thing is, it is often benign. “Babies do stretch all the time; you may see after waking from sleep or, trying to poop for example,” says Dr. Mitzner. “ Often the grunting and noises that you hear with this is quick and they are otherwise happy.” If your baby continues grunting (or the sounds are accompanied by crying or arching), contact your pediatrician to see if it’s something more serious.

Some newborn grunting occurs without any real recognizable facial expressions. But when a baby is preparing to poop, you might hear a symphony of sounds coming from their mouth and their tush, too. “Expect babies to be noisy when they are passing gas or having a bowel movement,” says Dr. Scott. “Grunting noises are very common and simply occur when they are breathing out and bearing down.” Thankfully, the grunting will typically cease when your little one has a poopy diaper.

While most forms of grunting are innocent enough, there may be times when it could signify a problem, particularly with pooping. “If a baby is straining to poop for more than 20-30 minutes without passing a stool, or the grunting is accompanied by crying in pain, this can be a sign of constipation,” explains Dr. Scott. “Expect up to 10-15 minutes of some grunting with passing stool, but the infant should not act like they are in pain.” If there’s a lot of grunting without producing any poop, speak with your doctor.

Grunting can also be concerning when it comes to Baby’s breathing. “The most concerning grunting can occur with respiratory distress or difficulty breathing,” says Dr. Scott. “This can be a sign of wheezing or lung infection in infants, pointing to something like RSV or respiratory syncytial virus.” According to Dr. Scott, the infant will be breathing fast (60 times or more a minute), may have flaring of the nostrils with each breath, may have a fever, and grunt with each expiration as if forcing air out. If you see that your baby is continuously breathing this way accompanied by grunting, it warrants a visit to the doctor right away.

An occasional grunt here or there isn’t a big deal when it comes to your baby. It’s the way your baby can communicate with you until they’re big enough to have the right words to say. Just keep an eye on your baby’s grunting to ensure that it’s because they want to play or poop, and not something more serious.

Dr. Alison Mitzner, MD, a pediatrician and author of Calm and Confident Parenting