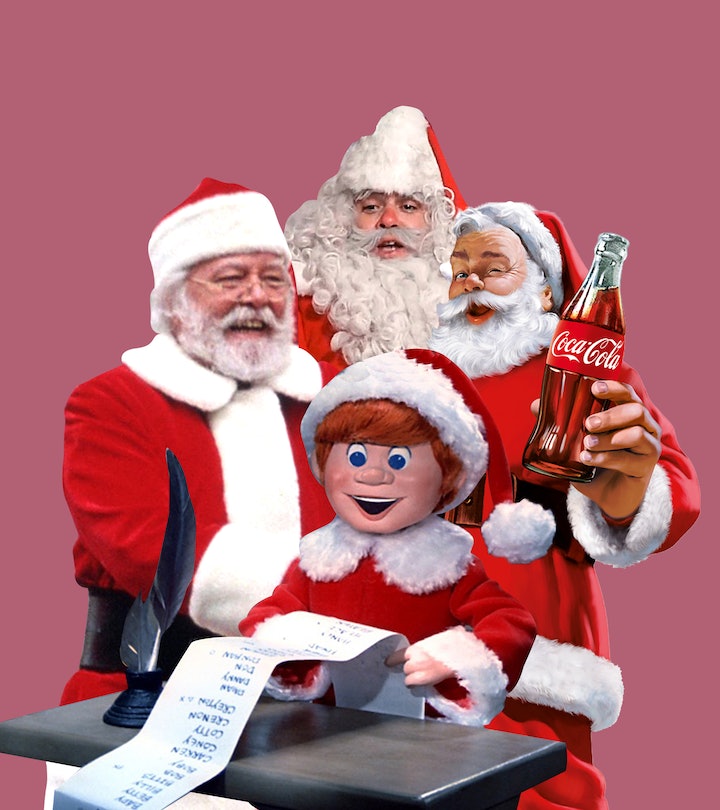 I’m still a former child enthralled by this pajama-clad godhead who was attuned to both my heart’s desires and my house’s weakest access points.

It’s complicated for me and Santa Claus this year. My eldest child is 7 years old and this is the first Christmas season where I have not felt that perfect belief in the big man was a foregone conclusion. Sometimes it feels like he and I are on the bus from Speed together, locked in mutual peril where one wrong move could detonate a bomb of skepticism. I cannot prevent some officious fifth-grade punk at his afterschool program from meddling, nor can I prevent a relative from chatting candidly within his earshot. It’s not my job to keep my child from experiencing disappointment, but when the disappointment is one both engineered and upheld by me, it becomes a tragic pratfall of my own dumb design.

Why did we do this to ourselves? I've wondered these past few weeks. When I’m feeling uncharitable towards the jolly old elf, I channel the memory of my sister waking me up on Christmas morning and telling me there was a guinea pig (caged) under the tree for me. I must have levitated 2 feet off the ground with happiness. Yes, I’m a current adult in charge of being Santa for my kids, but I’m still a former child enthralled by this pajama-clad godhead who was attuned to both my heart’s desires and my house’s weakest access points. How do you not fall in love?

In the spirit of making my peace with the big guy, I’ve rated some pop culture Santas who left an impression. My son and I stay gripping the bus handrails, hurtling towards Christmas Eve. I hope we make it.

It doesn’t even bother me that this Santa is too thin because he is somehow still the mold. Sweet baby Natalie Wood, whose character has been appropriately given the no-nonsense name “Susan,” is in the midst of having the magic of Christmas ruined by her sensible mother Doris. Now I’m not interested in maligning Doris, played by smokeshow Maureen O’Hara, already fighting for her life as a divorced, working mom in a ‘40s film. When I see Santa and Susan interact, I am reminded of the main appeal of Santa to children.

He subverts the authority of cynical adults and really sees children for who they are: distinct individuals containing worlds within themselves. Not bad for an hour and 41 minutes of Macy’s spon.

Odious Tim Allen dons odious fat suit and fat prosthetics to play Santa in 1994’s The Santa Clause. Then he $ign$ on for two more sequels, plus a Disney+ limited series out this fall. Nearly 30 years of Tim Allen Christmas film hegemony. Even Putin let Medvedev serve for a few years in the middle of his reign. Stop doing this to us.

Coca-Cola’s depiction of Santa barely speaks and often has dark eyebrows. OK... hot. The cherry red of his coat adheres to Coca-Cola brand guidelines, and his head is positioned in a permanent jaunty tilt. He seems quick with a wink, embodying the kind of bar regular that the staff adores but about whom they are sometimes concerned. He’s not a boozer, though. His buzz is all caramel coloring and high-fructose corn syrup.

The pairing of cookies with Coke is a reach, even for a sweets-loving magical elf. I’m reminded that in my childhood, we set beer out for Santa with his cookies. Would hate to yuck Santa’s yum, plus you know he’ll tip at least 30% and tell you to stay out of trouble.

Santa is not the main event in Rudolph The Red-Nosed Reindeer but without his Arctic logistics operation, there is no toxic reindeer flying academy, nor can there be a dentally-inclined elf on a voyage of self-discovery. You’ll know a Rankin/Bass Santa by the soothing proportions and a commitment to perfectly matte textures, a squat man with an egg-shaped belly and short limbs. I’m baffled by the choice to make him BIC-razor bald under his signature red cap, but the clay world is one of poreless flatness. Even his beard appears waterproofed, constructed of some silvery space-age polymer that does not grow in but simply exists as one discrete decoration.

I’m a certified Rankin/Bass-head and would like nothing more than to wake up in a plasticine world of their creation, jittering along on my stop-motion feet, Phil Spector’s Christmas album scoring my new reality. However, the conflicts necessary to move the plot along in these films serve as an unpleasant reminder that Santa is ultimately a factory owner exploiting workers. Please don’t try to make me sympathize with a boss! Fair contract now.

If the Miracle on 34th Street’s Kris Kringle made each viewer believe that their mall Santa could be the real Santa, A Christmas Story reminded us that the hyper-commodification of our modern celebrations is a nightmarish fever dream of dizzying lights, sensory overwhelm, and adults speaking sharply. Even if, like Ralphie, you can summon the words in your stunned state to express your most fervent Christmas wish, you’re still likely to get a big black boot to the face as you slide back down the chute into consumer hell. HO HO HO.

It is labor to create the magic of Christmas, and it is borne mostly by mothers. To share even a mote of credit with a fictional old guy, after a lifetime of having credit robbed from us by flesh-and-blood old guys in our classrooms, workplaces, the halls of Congress, and our own homes… feels repellent. Like there should be a law against it. Still, children are a group even more powerless and vulnerable than mothers. And when I see morning show anchors straight-faced discussing Santa’s flight as reported by NORAD’s Santa Tracker, I feel a surge of pride in humanity. Parenting is theatre, a decades-long performance of a training-wheels version of the world our kids will inherit if they’re lucky enough to grow up. Often this theatre feels siloed to our homes, our ability to parent and organize collectively fractured into our individual family parcels by systems designed to keep us oppressed.

I know that in the real world Santa doesn’t visit every house, and I know that Santa isn’t able to give equitably to the homes he does visit. But when we read from the script that says that wonder and magic are worth protecting, it feels like a different kind of world is possible.

And besides, God, it’s so much better than being one of those “I dOn’T LiE tO My ChIldRen” people.