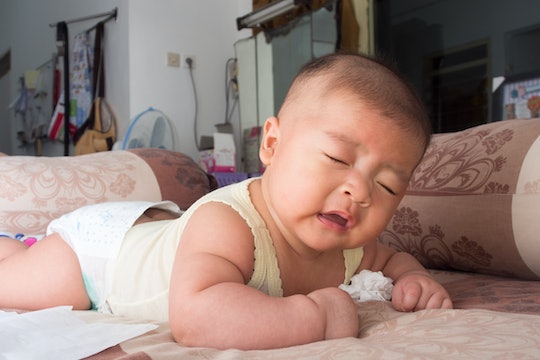 Everything You Need To Know About Your Sneezing Infant

Sneezing isn’t necessarily a sign your infant has caught a cold.

The first time you hear your newborn sneeze, it may be one of the cutest sounds you’ve ever heard. But the awe can quickly turn into curiosity and genuine concern if it continues. Questions can race through your mind like did they catch a cold or if you’ve introduced your newborn to people too soon. You’ll be relieved to know that rather than being a symptom of an illness, having a sneezing newborn is normal.

So what’s going on when your baby sneezes? I asked three experts to tell me everything about newborn sneezes to put new parents at ease.

Why is my newborn sneezing so much?

Since babies are breast and bottle-fed, they rely on just one form of breathing. “Newborns are what we call obligate nasal breathers, which means they breathe predominantly through their nose,” says Dr. Farah Lokey, M.D., a pediatrician at Phoenix Children’s Pediatrics in Arizona. It’s also a significant contributor to why you may hear them sneezing so often.

The fact of the matter is newborns sneeze more than older children or adults. “Their little noses are hypersensitive to anything getting in their nostrils, so they clear their noses a lot more than the rest of us by sneezing,” says Lokey.

During the first few days of life, sneezing helps clear out fluids, including what is retained from birth, says Dr. Nehal Thakkar, M.D., also a practicing pediatrician at Phoenix Children’s Hospital. This protective reflex ensures that your baby’s nervous system is intact and performing properly.

Another cause of sneezing is congestion. “This congestion can be anything from some milk coming in the nose after feeding to illness,” Lokey says.

Lokey adds that overstimulation, which is most common in babies during their first four months, may also trigger sneezing. Overstimulation can be a response to too much noise, too many people, or just strangeness, like a new environment or new people. It can induce sneezing as well as hiccups. “This may be because of an increase in breathing secondary to excitement and having to clear more from the nose.”

When should I be concerned about my newborn sneezing?

Sneezing on its own is usually harmless, says pediatrician Dr. Gary Kirkilas, D.O.

But if your baby is sneezing and has the following additional symptoms, he suggests you make an appointment with your pediatrician:

The combination of the listed symptoms can indicate they might have a respiratory illness, says Kirkilas, including a viral infection, such as a common cold or an upper respiratory infection.

Can I make my newborn sneeze?

Since sneezing is a healthy response, is there ever a time when you should encourage sneezing?

“Sneezing is a helpful respiratory reflex to help clear our nasal passages from irritants like germs, dust, or mucus,” says Kirkilas. It also helps break up the congestion that your baby may be experiencing.

Nonetheless, he doesn’t think you should deliberately try to make your newborn sneeze. “If your baby is congested and it seems to be causing discomfort, it may be beneficial to loosen the secretions to allow them to be cleared more easily. Sometimes, the methods we use to do this may lead to more sneezing,” says Thakkar. Namely methods like nasal saline drops and bulb suction, also known as a baby aspirator.

The experts all recommend that you let your baby be and let them go through their process without interference. “The sneeze reflex is triggered only when it’s needed, so there’s no need to induce a sneeze,” says Kirkilas.

Once again, Mother Nature provides. If your baby is sneezing or not sneezing, it’s because sneezing is necessary or it is not.

More Like This
Here's Why Wearing Long Sleeves In The Summer Can Be Good For Your Baby
How To Breastfeed A Baby With A Cleft Lip Or Cleft Palate
Can You Get The Covid Vaccine For Kids Under 5 At Publix?
You Can Schedule Your Kid’s Covid Vaccine Appointment At Walmart