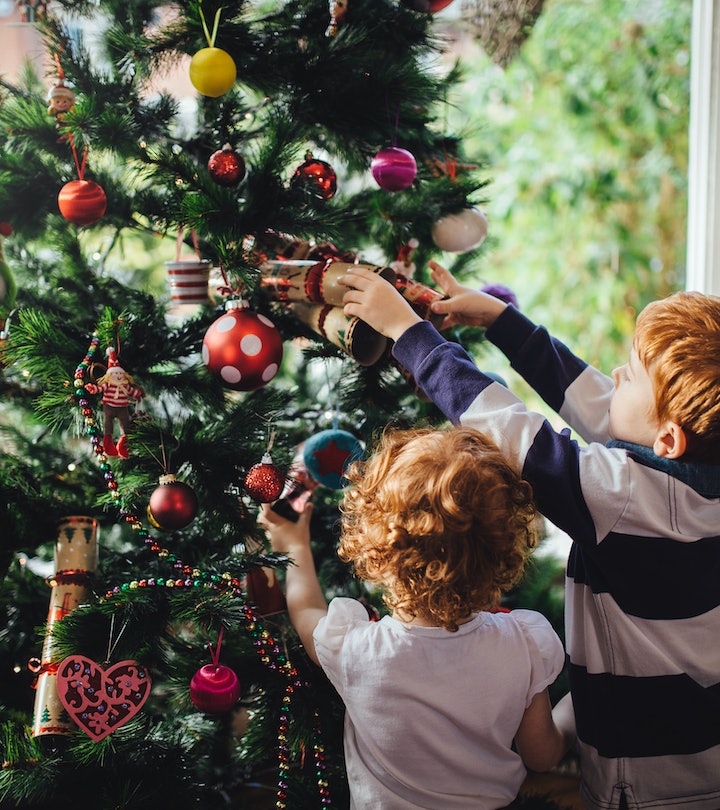 Honesty is key. As is sensitivity.

Christmas, what it is and what it means, is personal to each individual. For some it’s the religious highpoint of the year. For others, it’s a great way to share gifts and make merry. And for others, who come from different cultures or faith backgrounds, it’s just another day. But whether you’re agnostic or a practicing Catholic, Presbyterian, or Hindi, chances are questions from your children are going to arise regarding what the holiday is all about. As with any delicate topic, the key is to be honest with your child but sensitive. Here’s how to explain Christmas to a child.

What is the story of Christmas?

Christianity’s mark on the world, for good and bad, can be seen everywhere, from art history to the formation of Western society. But for now, children might just be wondering about nativities they see around town or mentions of someone named Jesus. In order for a child to understand, keep your explanation straightforward and simple. For instance:

There are a group of people who call themselves Christians. These people believe in one God. And in their religion, which is the word for faith or a belief in something bigger than ourselves, God had one son named Jesus.

Who is baby Jesus?

Christians believe that Jesus is the son of God. Their Bible — a book of stories, rules, and lessons — tells them that this boy Jesus was who was born to a woman named Mary.

The way the story goes, an angel visited Mary and told her she was going to have a baby and that he would be the son of God. But Mary was already engaged to marry Joseph. The angel appeared to Joseph in a dream and told him that he would raise Jesus as his own.

So they did as the angel told them.

At this time, Caesar Augustus, the head of an empire called Rome, ruled that all the people in his kingdom needed to be counted. We call this a census. This list of all the people in Rome would allow Caesar to collect money from them. We call this collecting of money taxes. In order to be counted as part of the population of Rome, Mary and Joseph needed to travel to where Joseph’s family lived in Bethlehem so they could be properly included in the count.

But when Mary and Joseph got to Bethlehem, there was no place for them to stay the night. There was no room in an inn, so they had to sleep in a stable, or barn, with the animals. And on that night, Christians believe that Mary gave birth to baby Jesus. The reason Christians believe his birth was so important is that their Bible, that important book we talked about, tells them that God sent Jesus to the world to forgive everyone’s sins. Sins are the mistakes people have done.

That’s why Christmas is celebrated every year by Christians as a time of joy and peace.

How to explain Christmas if your family are not practicing Christians?

If your family are not practicing Christians, “you can tell a child, ‘every religion knows about Jesus, but what they think of him is different. Christians believe he was God’s son. Other religions, for instance Judaism, believe Jesus was a great teacher, but that he wasn’t the son of God,” says Dr. Robin Gurwitch, a faculty member in the Duke University Department of Psychiatry and Behavioral Sciences and the Center for Child and Family Health.

Dr. Gurwitch says the holiday season is a great time to explore different faiths and their celebrations in addition to preparing for your own holiday traditions.

“There’s something like 20 some holidays between Thanksgiving and the end of January for all different faiths,” says Dr. Gurwitch. “When someone says happy holidays it’s a recognition of the many holidays and a way to show respect for what you as well as others celebrate.”

“All of these holidays look different, but they all have some things in common: they all include family as part of the celebration. They include special traditions and special foods,” says Dr. Gurwitch. And pointing this out to children is a great way for them to see similarities in others instead of focusing on differences.

She suggests taking time to read children’s books to kids about other faith traditions, as well as share celebrations with friends and neighbors who practice different beliefs and participate in activities like baking special foods or games.

“Prejudice is a taught thing,” says Dr. Gurwitch. “It is not inherent. Children are taught it. By the same idea, you can teach respect and help foster support for people that may be different in their faith.”

What is age appropriate from the story in the Bible?

Worried about navigating an explanation of what a virgin birth is? Understandable. But maybe you’re overthinking it.

“What you tell a 5-year-old will be different than a 10-year-old, but in short you could say that ‘God was Daddy and Mary was the mommy,’” says Dr. Gurwitch. “That’s plenty.”

If your child is older, then some books on sex education might be worth perusing before going into a deep dive.

How to explain Christmas if your family is interfaith?

Four in 10 Americans (39%) who have married since 2010 have a spouse who is in a different religious group, according to Pew Research. How they navigate the sharing of their beliefs with their children is personal and different for every family. But one Romper writer has some firsthand experience and advice.

“We give our kids the choice,” says Cat Bowen Tan, who is Jewish. Her husband, however, was raised Catholic. “My children know all about Judaism and Catholicism. We’ve been open and honest and never forced them one way.”

Because of that she says the holiday season has never been an issue. Her children have their own Menorahs and light the candles during Hanukah, but there’s also a Christmas tree in their house. On Christmas day they have their own family tradition of going out for Chinese and then seeing a movie.

The reason it works, Tan says, is because they’ve taken a transparent approach. “I would encourage parents be ecumenical about it and explain it. Be honest with your children, like ‘this is what I believe, this is what mama believes, but we’re going with this or that.’ They’re going to figure it out.”

Tan says her children have also benefited from living in a very diverse neighborhood where their friends and neighbors span the spectrum of a variety of faiths and cultures. And that exposure has only made them more sensitive, respectful and open to other faith practices.

How does Santa fit into the story of Christmas?

Santa Claus may be more familiar to most children than Jesus. But making sense of the two is still a tricky concept. To explain Santa to children, if you have a very inquisitive child, you can explain that Santa has many names: Father Christmas, Papa Noel, Kris Kringle, Old Saint Nick which comes from Saint Nicholas.

Who was Saint Nicholas?

“It is believed that Nicholas was born sometime around 280 A.D. in Patara, near Myra in modern-day Turkey,” History.com reports. A Christian monk who lived a long time ago, after Jesus in the third century A.D., Nicholas was a beloved man known for his generosity.

But that doesn’t explain how he became a “right jolly old elf.”

Because Nicholas was especially known for being someone who protected children, he became a very popular Saint all over Europe. So popular that from “1200 to 1500, St. Nicholas was the unchallenged bringer of gifts and the toast of celebrations centered around his feast day, December 6,” reports National Geographic. The Protestant Reformation in the 1500s took the spotlight off of saints; however, that left the quandary of who would continue to bring gifts to children every December.

Nat Geo says that we can thank the Netherlands for hanging onto Sinterklaas, a gift-giving version of Saint Nick who eventually made it to the new world with colonists. Nineteenth century poets can be credited for popularizing the pop culture Santa we know today, that rosy man who brings gifts to good girls and boys.

What are some kid-friendly books on faith-based holidays?

Ready to expand your children’s cultural understanding? Dr. Gurwitch recommends these kids books as a way to learn about other faith-based practices and holidays.

'The Christmas Story' by Jane Werner, illustrated by Eloise Wilkin
Amazon
'If I Could Give You Christmas' by Lynn Plourde, illustrated by Jennifer L. Meyer
Barnes & Noble
'Hershel and the Hanukkah Goblins' by Eric Kimmel, illustrated by Trina Schart Hyman
Inklings
'There's No Such Thing as a Chanukah Bush' by Sandy Goldstein, illustrated by Susan Sussman
Abe Books
'My First Kwanzaa' by Deborah Chocolate, illustrated by Cal Massey
Discover Books
'Christmas Around the World' by Mary D. Lankford, illustrated by Karen Dugan
Target
'Bringing In The New Year' by Grace Lin
Strand
'Diwali (Celebrate the World)' by Hannah Eliot, illustrated by Archana Sreenivasan
Amazon

The holidays really are a great time to celebrate many different holidays. And while Christmas may feel like it dominates the dialogue, you can change the discussion at home to help your children become more accepting, respectful and supportive of faith groups.