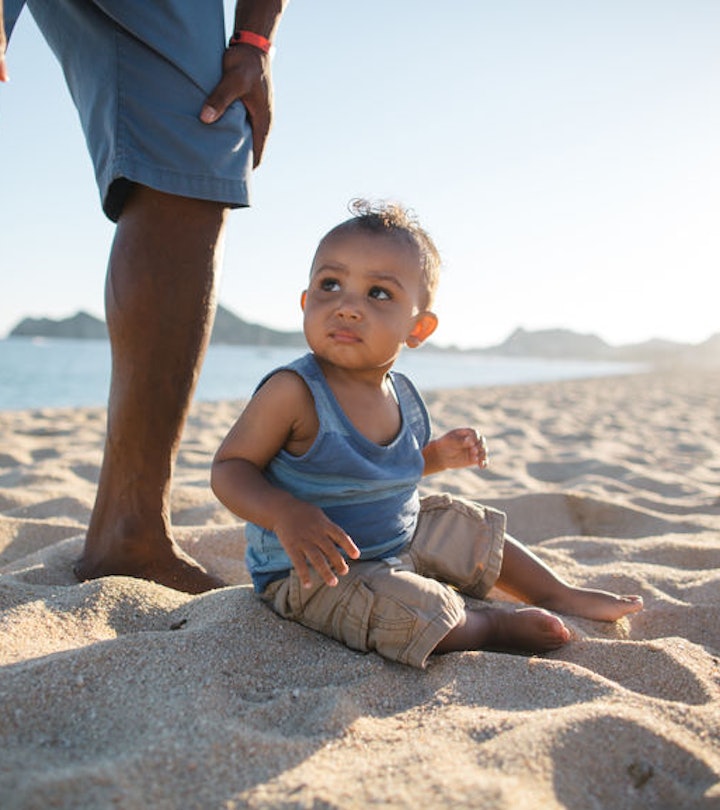 I love the beach. If I could, I would spend every waking hour sitting before the ocean, toes in the sand. Going to the beach is what summer is all about for my family. Now that my kids are older, it's a lot easier to go to the beach because I don't have to constantly watch every move they make. If you're a parent of little ones, you know what I'm talking about. The second you turn your back, they shove sand in their mouth like it’s made of powdered sugar. You're always vigilant because you don't know what happens when a baby eats sand, and you’re always worried they’re going to poop out a sand castle.

Babies Eating Sand Isn’t Worth Panicking About, But It’s Also Not Totally Safe

If you have been to the beach, sandbox, or any vaguely sandy area with a baby, then you have seen a baby at least attempt to eat sand. There is something infinitely alluring in the abrasive grains to a baby that the rest of us grown-ups will never comprehend. For the most part, it's no big deal, according to the Women and Children's Health Network. Babies quickly learn that eating the stuff is unpleasant at best, and discard the idea. That doesn't mean that it's completely absent of risk; sand is obviously not food, and also can be riddled with any number of contaminants, so you shouldn't just let them dig in.

My favorite beach to visit with my children is a city beach on the tip of long peninsula known as the Rockaways that is attached to Queens. Jacob Riis State Park is a bustling microcosm of the metropolis at large, frequently seeing tens of thousands of visitors in a day, many of them children and babies. And every weekend, as sure as the sun rises over the Atlantic each morning, there is a parent, trying in vain to wipe the sand out of their baby's mouth. All of the other parents collectively shudder, and give a warm look of "been there" to the parent reaching for the water bottle to uselessly spray at their baby's face.

The Risk Of Bacteria Is Real, As Is Choking

But, what's the real danger? What happens when babies eat sand? I reached out to pediatrician Dr. Randi Nelson, of Brightpoint Health in Brooklyn, New York (not far from the sandy shores of the Rockaways), and she tells Romper, "Normally, the ingestion of sand can be harmless; however, sand in a sandbox or even at the beach can contain fecal material and become a harbor for bacteria, especially if the sand is wet."

Fecal matter, as in poop. It's one thing to suspect that your child is shoving crap into their mouth with all that sand, and it's something else to have it confirmed. Also, wet sand is the sand babies love to play in, as it squishes and makes shapes, so you know that's what they're eating. And even clean sand could be hazardous, as Dr. Nelson explains. "Ingesting a large amount of sand can present as a choking hazard or cause intestinal obstruction."

Hopefully, you can put a stop to it before your tot swallows a whole snack of sand. No guarantees, though. Babies are deceptively crafty.

So if your child does ingest sand, especially a large amount, Dr. Nelson recommends monitoring for diarrhea, vomiting, abdominal pain, and/or fever. If you notice any of these symptoms, call your pediatrician immediately.

Dr. Jennifer Trachtenberg is a pediatrician and SpokesDoctor for the American Academy of Pediatrics, and she agrees that consuming a little bit of sand is generally no biggie. However, along with the fecal matter concerns, she says parents should also be on the lookout for hidden objects that could be harmful if swallowed. “There may be pieces of lead paint or other sharp objects that could lead to perforation.”

Dr. Nelson has one final tip on sand safety, and it has to do with at-home sandboxes.

"If you own a home sandbox, make sure that it is covered overnight to ensure animals don’t use it as a litter box, and that the sand is completely dry."

Because let's face it, a sandbox is just a giant litter box to every animal in the area. She notes that you should "change the sand if contaminated by feces and make sure your child washes hands after sand play." Eating sand isn't the worst thing babies do, but it does need to be monitored, like pretty much everything else with babies.

This article was originally published on June 1, 2019