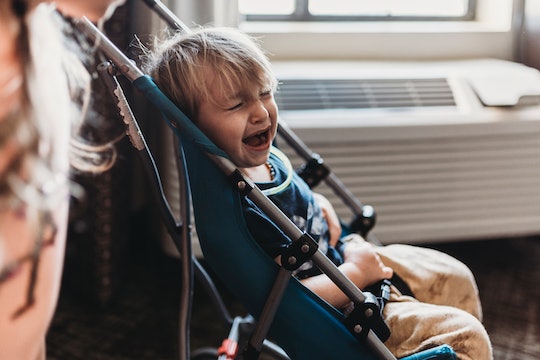 What To Do When Toddlers Don’t Listen, According To Experts

As a mom to an almost 3-year-old, the majority of my parenting energy lately seems to be spent on trying to keep my cool as she tests every boundary I’ve made for her. I know I’m not alone in this, either. So many other caregivers in my position are just as desperate to know what to do when toddlers don’t listen. This phase is exhausting, and some days, it can seem like it would be so much easier to just throw your hands up and give all of the control over to your tiny tyrant than to try to reason with them again.

First, even though this is incredibly hard to do while your toddler is blatantly ignoring you, it’s important to understand that them not listening has to do with them, not you. “When toddlers ‘don’t listen,’ it does not mean that they are being defiant or thoughtless, they are still practicing lots of things, including listening.” child psychiatrist, Helen Egger, M.D., tells Romper in an email. She further explains that not only are toddlers still learning and developing, but they’re also human, just like anyone else. “Toddlers are human beings who are going to feel complex feelings and be affected by how tired they are, whether they are hungry, etc., just like older kids and adults.”

They’re not understanding what you need them to do

What may be intensifying this, however, likely boils down to communication. “The toddler may not understand the directives, or the caregiver may be giving directives before they fully gain the child’s attention,” Nichole Merz, child developmental specialist at The Early Learning Institute, tells Romper in an email.

Egger agrees that communication is often to blame in these situations. For example, if your directive is too complex, it might not be that your toddler isn’t listening but rather that your toddler may simply not be able to keep up with it. Another possibility is that you don’t have their full attention because they’re distracted by something, which means they aren’t hearing everything you say.

Transitions are a tricky time

Transitions are very difficult for young kids, especially toddlers, so if you’re looking for an immediate response from them, you’re probably not going to get it. Similarly, Merz notes that if a toddler is engaging in a “preferred activity” and you ask them to do something they don’t want to do, you’re not only requesting a transition from them, but you’re requesting they transition from something fun to something boring, so it’s safe to assume they’ll take their sweet time before following directions (or they’ll have a temper tantrum).

They don’t have the right motivation

Egger suggests they may not be motivated to do as they’re told if you aren’t giving them positive reinforcement when they do follow directions, such as, “I like how you put your shoes in the closet when I asked you.”

What to do when your toddler won’t listen to you

Since communication is most likely the reason why your toddler won’t listen to you, the best thing you can do is to ensure you’re communicating in a way they can understand. Here are some tips from Egger and Merz for how to do this:

When you’re delivering your request to your toddler, think of a way to gesture the directive as well. For example, if you’re asking them to put on their coat, mimic putting on and zipping up your own jacket to help make the directive clear.

Since transitions are so hard for toddlers, it is helpful to warn them when one is coming. “If your child is watching a show or playing with their toys and you would like them to stop or do something else and listen, give them a verbal warning for when their activity will end,” says Egger, “This will help prepare them emotionally and give them time to revert their attention back to you.” She also suggests using timers for this purpose (but only if they can understand what the countdown means).

Keep it simple and specific

Avoid getting too colorful with your language. When making your directive, get right to the point and use language your child can understand. “Instead of just saying ‘clean up your room,’ try saying something specific, such as, ‘put the blocks in your toy chest,’” says Merz.

It’s pretty hard to ignore someone when you’re looking directly at them, right? This is why both Merz and Egger suggest getting down to your toddler’s level and making eye contact when you’re delivering your message to ensure you’re getting their full attention.

What not to do when toddlers don’t listen

To the dismay of every toddler caregiver out there, the first thing Merz says not to do when your toddler won’t listen is to get frustrated (easier said than done, I know). It’s incredibly difficult to do, but you have to model behavior because if you start to get frustrated, so will the toddler, and the situation will only escalate into a power struggle. So try to stay calm.

Other things not to do when your toddler won’t listen, according to Merz and Egger, include:

Merz notes that if you’re asking something of your toddler that isn’t in their normal routine, they may struggle (which could be interpreted as them not listening to you). “Caregivers should remember that children don’t know the daily routine – like washing their hands or putting away toys – unless you tell them and regularly reinforce these activities,” she says.

“If I’ve learned anything in my 30 years as a psychiatrist, it’s that our words have power,” says Egger. If you’re using a negative tone or criticizing your toddler and/or their behavior, they will likely tune you out completely (best case scenario) or have an emotional reaction (likely a tantrum). Instead of criticizing, use a pleasant tone and encourage them to follow your directive. This is a good time to try some of the communication tips like getting down on their level.

Order, beg, or ask them to do something

When your toddler isn’t listening and your patience is getting thin, your natural response may be to ask them nicely a few more times, then try ordering them, only to land on begging out of sheer desperation and exhaustion (at least, that’s usually my pattern). But Egger suggests not doing this because they’ll either respond with a defiant “no!” or ignore you completely. Instead, she says you should be firm in asking them to complete the task and then providing positive reinforcement when they complete it or giving them a consequence if they don’t.

The last item on this list of “don’ts” is: don’t use “don’t” phrases. “Try reframing your reprimands into a positive light,” suggests Egger, “Children don’t want to be bad — they want to have a relationship with you and make you happy, so taking this approach may help.” For example, instead of saying “don’t run” say “use your walking feet, please.”

How to discipline a toddler

Assuming the toddler is not doing something that would put themselves or someone else in danger, Egger says it’s important that caregivers don’t look at discipline only as a way to stop a child from doing something, but also to help teach them how to make good choices the next time a similar situation occurs. “You’re not trying to teach your child fear,” she says. “You’re trying to teach them how to behave differently in the future.” To do this, you want to make sure your discipline is both a consequence and a lesson that will help them learn how to better control their behaviors and emotions moving forward.

Unfortunately, knowing what to do when toddlers don’t listen is not instinctive for caregivers, and it can feel extremely frustrating when it happens. The best thing you can do is to practice positive reinforcement outside these moments of conflict so that simply not getting praise will serve as a consequence for your tot. And, as difficult as it may be (and some days it can be really difficult), when conflict does arise, try your best to regulate your own emotions and model the behavior you want from them so that they can slowly learn how to do the same. Then, once they’ve gone to bed, feel free to scream into your pillow to get all of your irritation out before you wake up and do it all again tomorrow (just kidding... kind of).

More Like This
Should You Be Giving Your Toddler Melatonin To Help Them Sleep?
Can You Help Your Baby’s Hair Grow?
17 Best Potty Training Products For Toddlers
From Captions To Gifts, These Are All The Kindergarten Graduation Ideas You Need