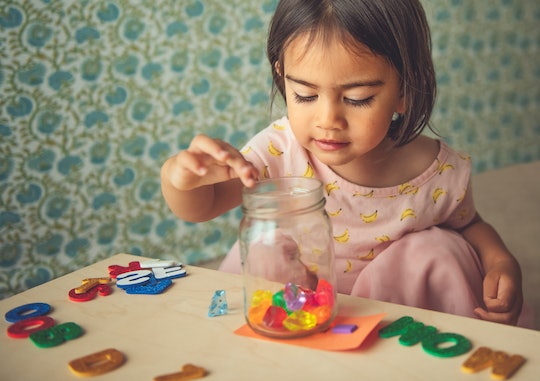 How To Help Your Toddler Build Their Counting Skills

It’s easier than you think (and fun, too).

The toddler period, roughly considered ages 18 months to 2 and a half years, is full of developmental milestones. But when do toddlers learn to count? Suddenly you might find your little one not just singing rhymes about numbers, but actually quantifying them on their own. As it turns out, early childhood development researchers have discovered that even infants are born with an innate understanding of quantity.

That means that toddlers are probably able to count earlier than we thought. In fact, even if they can’t fully verbalize it, your toddler might be making sense of numbers right now.

When do toddlers learn to count?

When toddlers learn to count is a question that doesn’t have one set answer, says Erica Zippert, Postdoctoral Research Associate at Purdue University. Every child develops differently and at their own pace. However, “there are studies of babies that show that they can tell the difference between a smaller and a larger quantity,” says Zippert. Babies “recognize counting as numerically relevant years before acquiring the meanings of number words,” a 2019 study in Developmental Science found.

Zippert says this innate ability makes sense when you consider it as a survival skill. “It’s survival for humans and animals alike. For instance, think of recognizing danger, they have to think is this group of animals going to outnumber us?” says Zippert.

Children are acquiring the words for numbers just as they’re learning the words for other things. Usually kids are learning this through song and nursery rhymes. “That is not going to translate on its own to deep number knowledge,” says Zippert. But by hearing number words being used to emphasize their meaning, toddlers can make a leap that’s really important to learn that they represent quantity. “In early preschool is when kids are learning to connect number words to early quantities,” says Zippert.

In this case preschool is considered ages 3 to 5. This is to say that kids can likely count “1, 2, 3, 4, 5” as young as 2, but they likely won’t be able to fully grasp counting as it pertains to quantifying numbers until they enter the preschool stage. That said, as Zippert mentioned, every child is different, and some may pick up numeracy very quickly, at as young as 2 to 2 and a half. For others, it might be a preschool development.

Signs your child knows how to count

When toddlers learn to count can be identified by a variety of signs. For instance, pattern work is a form of counting as well as labeling things as big or small, more or less. “Many times we don't think of those as counting skills, but they are a quantifier that demonstrates children have a grasp of numeracy,” says Jill Trumbell, Assistant Professor of Human Development & Family Studies at University of New Hampshire.

Just because your child might not be doing that at age 2 doesn’t mean it’s cause for concern, however, adds Trumbell. But she says if you want to help your child build their counting skills, “modeling counting behavior with your child and pointing to things while you count with them” is one way to encourage numeracy. “And I think that the sooner you do that, the better,” says Trumbell.

“I think what's important is that we use songs and nursery rhymes, but also we start using number words as well to quantify objects. And this is where the adults can really play an important role,” says Zippert. “There's research to show that the fastest way to teach kids how to connect number words to groups of objects is to label the set of objects first and then count them.”

For example, you might say to your child: “Look, I have three apples. One, two, three.” You name the quantity first, then count it.

Make observations about numbers throughout the day

While it might require a parent being more mindful, once in practice, this phrasing is easy to apply throughout the day. When walking up some steps you could say, “Look, we need to walk up five steps, one, two, three, four, five.”

Making this a regular part of discussion with a child is the key, says Trumbell. “When you're reading a book say, ‘Oh, you know how many flowers are on the page?’ to the child. It’s about integrating counting into everyday life.”

Cooking and playing board games —the latter more with preschoolers than with toddlers— can also help build numeracy skills. Trumbull recommends the game Chutes and Ladders as an especially good tool for math improvement.

But ultimately the idea is to focus on math and numeracy just as much as you might focus on learning letters for literacy, even when a child is just starting to explore quantities, both experts say. Research suggests that the sooner a child grasps numbers, the better prepared they will be to understand math later in life. “We found that preverbal number sense in 6-month-old infants predicted standardized math scores in the same children 3 years later. This discovery shows that number sense in infancy is a building block for later mathematical ability and invites educational interventions to improve number sense even before children learn to count,” a to a 2013 study published in Psychological and Cognitive Sciences found.

Which is all to say, it’s never too soon to start counting with your child. Even better? Your kids will love it. “Once children learn to count, they're so excited about it, they just want to count everything,” says Zippert.