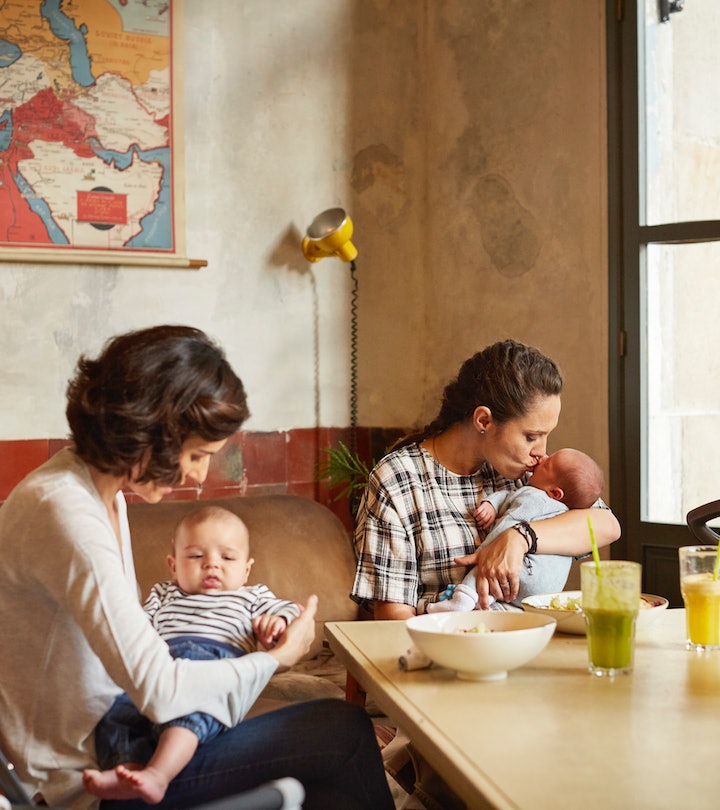 When It’s Safe To Bring Your Newborn To A Restaurant, According To A Pediatrician

It’s normal to want to live a little.

It's an ironic fact of motherhood: Throughout your pregnancy, you want as many people around you as possible — for the initial announcement, the gender reveal, the shower, and all the last-days-of-freedom outings with your girlfriends. But once the baby arrives, you worry about exposing it to anyone outside your own four walls. They’re super vulnerable, plus you’ve got your pediatrician reminding you that a fever in the early weeks qualifies as an emergency. Yikes. You’re not sure whether you should push the stroller around the block, much less take your newborn to a restaurant. That said, it can be important for your mental health, as a new parent, to get out a little. But is it safe to take a newborn to a restaurant? Here’s what the experts have to say.

When is it safe to take a newborn to a restaurant?

This is a bit tricky, and it will depend a lot on the season and your personal risk tolerance. But, in general, it is not a bad idea to be quite cautious if you have a baby under 12 weeks old. “Although it’s potentially safe to bring even newborns out in the world, they’re at much higher risk for getting serious infections when exposed to other people in their first two to three months of life before they get their first round of immunizations,” says Dr. Andrew Bernstein, Clinical Assistant Professor of Pediatrics at the Northwestern University Feinberg School of Medicine.

You really want to protect them, because any illness can be dangerous when they are so little, and a fever will likely require interventions. “At that age, it’s harder to determine which child with a fever has a mild viral illness and which one has something serious like meningitis or a blood infection,” Bernstein explains.

What to consider before taking a newborn to a restaurant

Still, that doesn't mean you have to isolate yourself and your newborn for months on end. Having an occasional meal out with a very young baby is fine, as long as you follow some common sense precautions. “I tell parents that it’s OK to go out in public with their newborns as long as it’s not a crowded place, and as long as strangers aren’t allowed to touch or get too close to the baby,” says Dr. Bernstein.

The other potential problem with taking a newborn to a restaurant is the risk that the child will become fussy, which might be stressful. If that happens, says Bernstein, it's perfectly fine to try feeding, changing, or comforting your baby to see if it will settle down long enough for you to finish your meal. For some families, however, the trouble may come shortly after you pay the check and head out. “Some babies will need to have a big cry after they get home from an overstimulating environment,” Dr. Bernstein adds.

There are certain advantages to eating out with such a small baby. You don't have to ask for a high chair or bring anything other than diapers, a bottle of formula, or your breast. There's no need to consult your child to make sure they're OK with Thai food rather than pizza. Newborns don't have to be entertained with crayons and lame paper placemats with mazes and riddles. And when you get home, chances are it'll be time for the baby's nap or bedtime, giving you an hour or two to relax and congratulate yourself on a successful outing.

This article was originally published on April 9, 2019