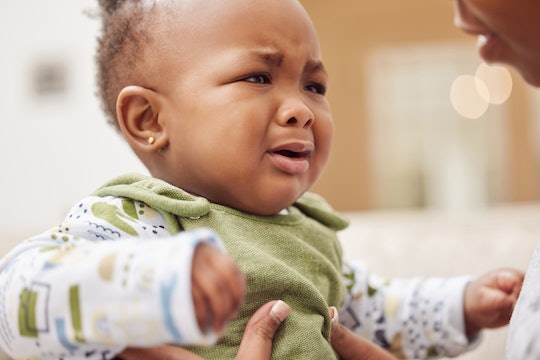 Why Does My Baby Whine? Experts Explain The Reasons

It’s another way they try to communicate.

When you first become a parent, you expect to deal with things like crying, spit-up, tantrums, and blow-out diapers, but you might think you’d have at least a year before the whining started. At least, that’s what I thought. I quickly realized that I was wrong, and I was constantly wondering, why does my baby whine so much?

After I had my first daughter, it took no time at all for me to be able to distinguish her different cries. I knew the difference between her “I’m awake” cry and her “I’m hungry and mad” cry, and within half a second of hearing the “I’m hurt” cry I’d be running to her. The whining, though, was a different story. I understood her whines when she was clearly unhappy with something, but she would also whine even when she was eating or sleeping, and I could not figure out why.

As it turns out, this is actually a very common behavior in babies, and a lot of things can trigger it.

Why Does My Baby Whine So Much?

If you also find yourself frequently wondering, “why does my baby whine so much?,” most often, the simple answer is: they’re trying to tell you something. Since babies aren’t able to talk, they have to use different noises and gestures to get their caregiver’s attention. In some situations, the whining may be an early indicator that they’re hungry, but not so hungry they feel the need to scream, or it could be their way of letting you know they’re not feeling well.

“Not all whining or whimpering is a bad thing,” lactation consultant Demi Lucas, IBCLC tells Romper in an email. “Babies cry to communicate.” Even if the whining is somewhat frequent, that’s not necessarily a red flag, according to Jen Trachtenberg, MD, a pediatrician, and expert for Store Brand Formula. “In general, if your baby is occasionally whiny or fussy but can otherwise be soothed, I wouldn’t be overly concerned or stressed,” she says, “Most likely it will pass on its own as they grow and develop.”

That being said, in most cases, there is a reason your baby is whining to communicate with you. In some instances, your baby may be:

Why Does My Baby Whine In Their Sleep?

As a new parent, I had a lot of questions, but “why does my baby whine in their sleep” was one of the ones I asked the most. My first daughter’s whining and whimpering in her sleep was so loud that I had to move her to the other side of the room in order to get some sleep. And, according to Dr. Trachtenberg, my story isn’t unique.

“It is much more common than parents think for [a] baby to fuss or whine in their sleep,” she says, because as babies move through the different stages of sleep, they will naturally whine. So, while it may be disruptive for you, it’s more than likely a sign that they’re resting peacefully and transitioning into a deeper sleep (or possibly that they’re starting to wake up). However, she notes that if they’re whining, whimpering, or fussing and can’t be soothed back to sleep, then it may be because they’re hungry, need a diaper change, or are sick.

Why Does My Baby Whine While Breastfeeding?

I bottle-fed both of my kids, and I witnessed my fair share of their whining while feeding. There are a variety of reasons a bottle-fed baby may fuss during a feeding, but the list of possible causes for breastfeeding babies might be a little bit longer. Both Lucas and Dr. Trachtenberg say it's very common for babies to whimper or whine while breastfeeding and the cause could be anything from their latch to mom’s flow to how their tummy is feeling during the process.

“Your baby may whine or fuss during breastfeeding for a multitude of reasons,” says Dr. Trachtenberg, “such as if [they’re] not latching on properly, there is not enough milk [supply] by the evening, or there is a fast, forceful milk flow first thing in the morning.” Additionally, she says it could be a sign that the baby needs to be burped more frequently during feedings. Lucas says some babies will whine during feedings because they’re so hungry and impatient as they wait for the milk to let down, or they may favor one breast over the other. “If the whimpering or whining is not accompanied by other behaviors or indicators that something could need further evaluation,” such as a fever or other sign of illness, “then do not become too concerned about whining during feeds, as it can be for a variety of non-concerning reasons,” says Lucas. If you are still concerned, though, she suggests taking notes during feedings to see if you can find any kind of pattern to help indicate why your baby is whining during feedings, because if you can pinpoint it your breastfeeding consultant or healthcare provider may be able to help you figure out what your little one is trying to tell you.

With so many possible reasons why a baby may whine, it’s safe to say you can expect to hear it somewhat regularly. If there is no obvious sign that something is wrong, then try not to worry and instead focus on what they might be trying to tell you. Still, if you can’t help but be concerned, trust your instincts and don't hesitate to contact your baby’s provider to ease your mind.

Jen Trachtenberg, MD, Assistant Clinical Professor of Pediatrics at The Icahn School of Medicine at Mount Sinai, a spokesperson for the American Academy of Pediatrics, and a Pediatric Expert for Store Brand Formula

More Like This
Why Does My Baby Cough While Breastfeeding? Experts Explain
Does Pumped Breast Milk Have Antibodies? Experts Weigh In
9 Reasons Why Some Women Can't Breastfeed
Here’s How Many Calories You Burn When Nursing