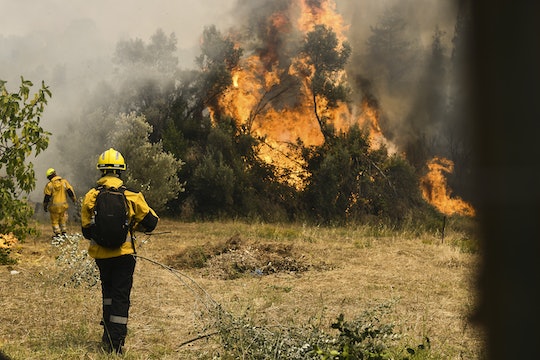 How To Stay Safe In A Wildfire With Kids, According To A Fire Fighter

Wildfire season, a period between May and October, is always of great concern in the United States, especially for people living on the West Coast. This year has been extraordinarily bad with nine new large fires reported active as of August 9. But wildfires are in no way exclusive to the West Coast as recent burns in Gatlinburg, Tenn., for example, prove.

As families assess their risks, one of the most important things to keep in mind is that wildfires aren’t predictable. Just because you think you’re in a safe zone doesn’t mean you are. With that said, it’s important to prepare everyone in the family for how to react if impacted by a wildfire.

Unlike a typical house fire, that requires a lot more than just checking the smoke alarm batteries frequently and knowing where to find the fire extinguisher. It’s a whole series of steps a family should take to stay safe.

Talk to Kids About Fire Safety

It’s all too easy to avoid tough topics, especially when you’re worried they might scare your children. But Travis DeFreest, a fire fighter in Colorado, says that when it comes to wildfire safety, parents must have the talk.

“Parents should discuss with their children the reasons why wildfires start and how they can be avoided,” says DeFreest. This includes things like the use of fireworks, unattended campfires, campfires not being fully extinguished, or having a fire while it’s very windy. “Children shouldn’t play with lighters at any time as well. Parents should be aware that parking a vehicle on dry grass is dangerous, chains from a trailer dragging can cause sparks [which leads to a] high potential for causing fires. Children and parents should know disposing of cigarettes in the woods or along roads leads to a high potential for causing fires.”

Putting the topic of fire safety out in the open, DeFreest says, will help children better understand how to keep themselves and the family at large safe.

Carrie Berger, the Fire Program Manager for the Forestry & Natural Resources Extension Fire Program at Oregon State University, agrees and says the younger they are, the better.

“Talk to toddlers and small children at a level they understand so it doesn’t frighten them,” Berger says. Be reassuring, but honest so children understand the danger, but know that with a smart plan, they’ll be protected.

There’s a reason schools hold fire drills all the time: practice makes perfect. And the same is true in the home.

“Families should absolutely practice evacuation drills, and even draw them out for their children,” says DeFreest. He recommends placing evacuation diagrams around the house to guide kids out should a house fire occur.

He also says that parents need to teach kids not to hide from fire fighters. “Children are very often found under beds or in closet because they are scared and don’t know how to evacuate,” DeFreest says.

“Have an evacuation plan meeting place,” adds Berger. “This could be something like ‘we’ll all meet at the mailbox,’” she says. Having a designated location gives everyone a direction to avoid getting separated in the chaos.

Berger also urges parents to create a communication plan where the whole family knows that if they get separated they can call an out of state contact to relay messages to each other. And don’t forget to make an evacuation plan for pets too. This should also be part of the wildfire prevention rehearsals.

In the event of a wildfire, having the right supplies on hand can make or break a family’s chances of getting out safely.

“They should have water, a bag of supplies, and clothes packed and ready for quick evacuation, don’t forget medicines, and things like that,” says DeFreest. “They should have non-perishable food ready as well.”

Kids can help out by prepping their own bags or preparing things like supplies for a pet.

“Assemble emergency supply kits for each person in the family,” says Berger. “I have two kids, two boys 10 and 13, my emergency kit or go bag is different from theirs. Things in their go bag are familiar or comforting item like a favorite blanket. Have them throw in an entertainment item because you never know how long you’ll be evacuated for. Depending on their age that could be a deck of cards, a board game, or smart phone. I also recommend a snack and something like a hydro flask for water.” And, she seconds DeFreest’s advice to remember kids’ meds. “My son has a peanut allergy, so I keep an Epipen in his go bag as well as his inhaler for his asthma,” adds Berger.

Regardless of what kind of fire a family is facing, DeFreest says that there are precautionary measures families should take every day to keep them safe.

“Parents should enforce keeping their children’s bedroom doors closed at night,” says DeFreest. “I can’t stress enough that children should sleep with their bedroom doors closed. Even a hollow core door can withstand smoke and fire long enough for the fire department to arrive and rescue you, or provide you the time to escape your room through a window. Smoke from a fire will seek fresh air and travel to the top floors of a home quickly seeking fresh air, if your bedroom door is open the smoke will find its way inside your room until it starts to fill your room to the floor. Children should close their bedroom door if it’s open and there’s a fire, they should remain low to the floor where there is still remaining fresh air.”

You likely heard these words as a kid and DeFreest says they still are true. In the event of a fire, be a child inside the home or facing flames outdoors, they should stop, drop, and roll. This is another activity he urges families to practice as it will help put out a flames should their bodies or clothes catch on fire.

“Most counties have an emergency notification system,” says Berger. Parents can sign themselves or even their children up for notices to come in via text, email, or phone call. These are generally designed on a three level alert for wildfires Berger says.

“Level 1 is get prepared, level 2 is start evacuation, and level 3 is get out now,” she says. If multiple family members are getting these messages, there’s a better chance of them all making it to safety.

“Home hardening” is a term fire management teams use to describe a system of safeguarding a home. It includes doing things like making the home itself fire repellant by swapping out, say, a shake roof for slate or metal; cleaning the gutters to clear out debris that could spark; and keeping the lawn free of dry fauna that could easily catch fire.

“My boys help with this,” says Berger. “They mow the lawn, pick up sticks, and restack our fire wood off our porch to a shed away from the home at the start of each summer to help keep our house safe.”

She recommends including children in this process once they’re old enough to help out.

Berger’s final tip is one that’s a challenge for anyone going through a natural disaster but she says it can make a huge difference in how children stay safe in a wildfire situation: stay calm.

“If you’re calm, your kids will be more calm,” she says. And the best way to ensure you can keep your anxiety down is by being prepared. Parents who take the aforementioned precautions will be in a better position to get their kids away from a wildfire safely and can avoid amplifying feelings of anxiety and chaos.

Remember, she says, “kids will feed off that chaos.”