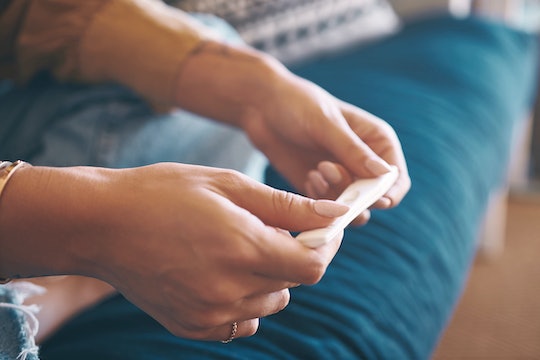 Many People Don't Know They're Pregnant At 6 Weeks

Do you know how many weeks pregnant you are by the time you miss your period?

The topic of abortion is once again taking center stage in our country. As some states move forward with proposed laws that create barriers around abortion access and fulfillment, Texas has now imposed a law that can prohibit people from accessing an abortion once there’s a heartbeat discovered, which could be as soon as six weeks into a pregnancy. Many advocates agree: this means that women in Texas can essentially no longer exercise their right to make the personal decision to have an abortion, as protected through the U.S. Supreme Court’s Roe V. Wade decision. As per Texas’ Senate Bill 8, people who help facilitate the act could be sued with thousands of dollars at stake. For many, the fear this information spreads is unquantifiable, and its implications life-altering.

One reason the move from Texas, SB 8, is so concerning is the discussed emphasis on the six-week mark in a pregnancy. A little background: As per The American College of Obstetricians and Gynecologists (ACOG), eight weeks post implantation, we’re discussing an embryo; the time beyond nine weeks marks the shift to talking about a fetus. That said, a heartbeat can happen at six weeks, as shared in the Journal of Prenatal Medicine, and at times possibly a bit before then. But ask yourself, just how many people are closely monitoring a potential pregnancy at as soon as two weeks after a missed period?

“Many people will know they are pregnant almost immediately after missing a period if they are tracking their cycles very closely,” says Dr. Melinda Henne, reproductive endocrinologist with Kindbody, service clinics in the fields of fertility, gynecology, and wellness. “However, it is more likely that women suspect pregnancy when they are one to two weeks late for their period and check a pregnancy test.” At that point, they are likely to already be considered nearly six weeks pregnant.

If a period doesn’t come when expected, pregnancy confirmation can arrive via a pregnancy test either at home or at the doctor’s office, Henne says.

Just to reiterate: taking a pregnancy test and then telling someone a week later doesn’t mean you are now “one week pregnant.” Being six weeks pregnant does not mean the weeks started counting the day you get the first pregnancy test. It means it’s been six weeks since your last period. A very short period of time.

How Can You Tell If You’re Six Weeks Pregnant?

The six-week ban does not mean someone finds out they’re pregnant and then six weeks later decides to have an abortion. “Traditionally, pregnancy weeks are calculated from the first day of the last menstrual period,” Henne tells Romper. “However, this assumes a 28-day cycle. And pregnancy doesn’t actually happen until ovulation occurs, which is two weeks before a period. So, for women with a 28-day cycle, a person is estimated to be ‘four weeks pregnant’ about two weeks after ovulation. If cycles are longer than 28 days, weeks of pregnancy can be estimated by counting from the first day of the last period and subtracting the difference between their cycle and 28 days.”

Henne offers an example: For a 35-day cycle, the amount of weeks pregnant on the day of a missed period is five weeks minus 7 days, which equals just four weeks.

Fair to say this can be complicated math? And conditions such as Polycystic Ovary Syndrome (PCOS), which causes irregular periods, as per ACOG, may further muddle calculations as they can impact the regularity of a cycle. “Patients who have irregular cycles for any reason, including Polycystic Ovarian Syndrome, have a more difficult time discovering they are pregnant because they don’t know when to expect a period, so they don’t know a period was missed,” Henne tells Romper. “Any suspicious symptoms, such as unusual spotting or cramping, or morning nausea should prompt a visit to their doctor who can confirm pregnancy with a urine or blood test. An ultrasound may be necessary to estimate how many weeks into pregnancy they are.”

The truth is, even with all of this information, many people do not realize they’re pregnant until right up to or even after the “six-week mark.” Long cycles, even without something like PCOS, can affect how far along a person thinks they are in a pregnancy versus how long they are according to their last menstrual cycle. Late ovulation, stress-induced menstrual cycles, a previous chemical pregnancy, and other things can throw off a person’s average cycle, leaving them confused as to how far long they are in a pregnancy until they receive a dating ultrasound. And at that point, they may be well over six weeks along.

What Does This All Mean For The Future?

Time will tell. But telling the exact timing around a pregnancy can be difficult. While eyes will be on the Supreme Court for actions, whether they support, block, or not stop restrictive abortion laws like this bill from Texas, many people will no doubt be paying close attention.