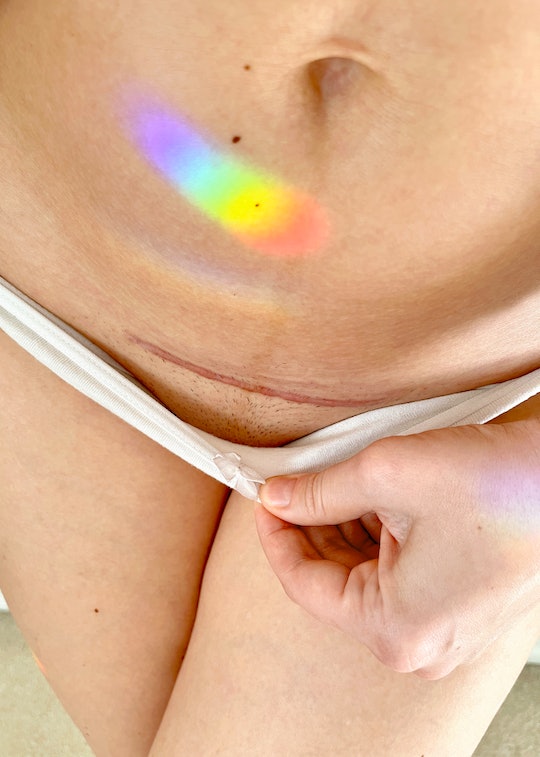 Society sends a shameful message about cesarean births. It’s time to change that.

During Alicia Brady’s labor, “the hits just kept coming.” Her daughter was a week late, so Brady was induced. She had so much back pain during labor, the doctors were worried she could break her coccyx. Brady pushed for two hours until she spiked a fever and passed out. When she regained consciousness, she started vomiting. Then the baby’s heart rate plummeted, and the OB-GYN was worried the umbilical cord could be wrapped around her neck. “We need to talk about a different way,” he told Brady, who agreed that a C-section was the best way forward. “My gut was telling me, Let’s go with what modern medicine can do to make this happen,” she recalls.

Brady, who works in nonprofit management in Atlanta, left the hospital feeling that her C-section was “the best thing that could have happened.” She was surprised when no one around her seemed to share that view.

Two months after her delivery, she got together with a friend whose birth had also ended in an unplanned C-section. “The first thing she did was give me condolences,” says Brady. “She began with the assumption that we’d both been subjected to this heinous medical act.”

Being postpartum, a new mom, and “someone who is always in [her own] head,” Brady started to second-guess her own reaction. Wondering if she was in denial or suppressing her emotions, she joined an online group focused on reducing unnecessary C-sections. But after lurking for a few weeks, Brady realized she didn’t feel like she felt the way everyone else did. “I didn’t feel like I had failed or had a lesser birth experience.”

Even after she accepted that she felt fine about her C-section, Brady found herself defending it. “I felt like I had to [prove] that the C-section was justified and necessary in the context of the pedestal that vaginal birth seemed to be placed on.”

When did C-sections become lesser births?

Cesareans are more complicated medically than vaginal births. A C-section is a major surgery and comes with the risks associated with any surgery. Recovery can be more painful and longer than after a vaginal birth. And to state the most obvious — and, for some, profound — difference, if you have a C-section, you don’t push your baby out. But none of those facts explains the negative way many people talk and think about Cesarean deliveries.

“Research shows that the feelings somebody has about their birth are most often socially informed,” says Sarah Best, a psychotherapist in New York City who specializes in reproductive mental health. Best and a colleague examined 31 peer-reviewed articles on the connection between cesarean delivery and perinatal mental health around the world and found, as Best puts it, “a direct relationship between feeling bad about your birth and the way your culture views it.”

That narrative exists for a reason; like all medical specialties, obstetrics was once dominated by men, and not to women’s benefit. “The history of cesareans is a gendered history,” adds Dr. Anne Drapkin Lyerly, M.D., author of A Good Birth: Finding the Positive and Profound in Your Childbirth Experience and professor of social medicine and obstetrics and gynecology at the UNC School of Medicine in Chapel Hill. “Medical intervention has been historically and problematically used — not in the service of women’s agency, autonomy, and health — but to control them.” Which is why, when the women’s movement took hold in the ‘60s and ‘70s, the delivery room became a target for reform.

Unfortunately, campaigns to keep women from being subjected to unnecessary surgery have morphed into the notion that C-sections are inferior birth experiences. “There’s been a very important effort to press back and reclaim power in reproductive health,” says Lyerly, who has given birth via cesarean five times. “The overuse of medical intervention is a problem, but shaming because of the use of medical intervention for birth is also a problem.”

What to do if you feel bad about not feeling bad

Lyerly’s husband also experienced some of the stigma that often follows a C-section. When he returned to work after their first child’s birth, “his colleagues were saying ‘sorry’ to him, and he was like, they should be saying congratulations,” says Lyerly. “When someone says, ‘I’m sorry you had a C-section,’ you think, I’m supposed to feel shame,” says Best. “And then if you don’t, not feeling shame becomes shameful.”

Best recommends taking time to identify which emotions are coming from what you believe and value and which ones are coming from the responses or values of other people in your life — your mother, your doctor, that person at the grocery store who said that one thing.

If you find that shame or regret is being foisted upon you, getting clear about what you feel about your birth and expressing that can be helpful. Best suggests responses like these:

“There is something really empowering when someone who has a cesarean and feels good about it pushes back against the narrative that this is a ‘less good’ birth,” says Best. She reiterates that this is lifesaving surgery — and often not one but two lives are being saved. “C-sections were initially developed to save lives, when there was a clear sense that mom was going to die, and they wanted to get the baby out so the baby could live. And then it was amazing when C-sections would save mom and baby. It was a revelatory moment in medicine.”

How to work through hard feelings

Of course, a cesarean birth can also be the last thing someone wanted or hoped for — and it can be a traumatic and scary experience. And, while our cultural narrative around C-sections contributes to those feelings, it does not make them any less legitimate. If you’re having negative or just conflicted feelings following your C-section, there are concrete ways to work through them.

Put feelings of shame or regret in context.

“It really helps to put the idea that ‘I’ve done something wrong here’ in its proper place, which is a place of subjectivity,” says Best. “The way we feel about this is really the product of the ideas we’ve internalized.”

“Find someone in your community who had a C-section and can relate to your feelings and just talk about it,” says Best. (A nonjudgmental friend or a therapist would work, too.) Naming your feelings can help you accept and move through them.

Look for the good stuff.

“Identify the disappointing parts, but also look for the strengths you exhibited and benefits” that came from the way you delivered, Best says. “You don’t have to give up the disappointment to acknowledge there might have been some benefit in it.”

Know that it’s OK to feel all sorts of ways about your birth.

“People sometimes feel they have to pick a lane — either they were disappointed or they loved their birth,” Best says. “But we have an amazing capacity to hold multiple emotions at a time. You can be disappointed and glad that you and your baby are healthy.”

Separating the kind of birth you had from who you are.

“I work with clients to help them validate their experience but understand it’s not a definition of who they are or what kind of mother they are,” Best says. She suggests framing the birth experience for yourself in terms like, “I’m disappointed that I had this birth, but here is all the evidence that I am a competent person in the world. I am loved. I am valued by the people in my life.”

Realize that emotions can change.

“It can be really helpful to acknowledge the impermanence of feelings,” Best says. You don’t have to try and change your feelings, but you can think to yourself, “‘I don’t feel great about my birth right now, but I know that everything feels different over time.’ That alone can inject a little dose of hope.”

The concepts of self-compassion and radical acceptance can be really helpful for anyone who has been through a difficult event. Self-compassion is the practice of giving yourself the same care and understanding you would give to a friend. Instead of ruminating on what could have gone differently, try letting yourself know that you understand how hard it feels that the birth didn’t go the way you wanted. It’s a subtle — but helpful — difference.

Radical acceptance involves giving your mind permission to accept an event that has happened and to stop trying to figure out why it happened or how it could have been prevented. “When we stop fighting against something that has already happened, it can lessen how unbearable or overwhelming the situation feels,” says Best.

“It doesn’t have to be perfect.”

Lyerly has done extensive research on what makes a “good birth” and has found that the elements women list are not necessarily specific to the way they delivered, but more focused on how they felt during it. “Often the same things that made a vaginal birth ‘good’ were the things that made a cesarean ‘good,’” says Lyerly. “Women said, ‘What made my birth good was that it felt really calm, and I could be really present for the birth of my baby.’”

“It doesn’t have to be perfect — nobody’s birth story is,” Lyerly adds. What matters is that the story is specifically yours.

When Brady looks back at her delivery nine years later, “It’s such a relatively small part of the whole picture of becoming a mom for me,” she says. “It was the day that I found out the baby I carried for nine months was a little girl, the moment I met her for the first time, and how we created our perfect little family of three. The way she eventually came out of my body feels like just a technicality.”

Dr. Anne Drapkin Lyerly, M.D., author of A Good Birth: Finding the Positive and Profound in Your Childbirth Experience and professor of social medicine and obstetrics and gynecology at the UNC School of Medicine in Chapel Hill

More Like This
Here's The Best Time To Remove Your C-Section Tape
A C-Section Actually Doesn't Take As Long As You Think, According To Experts
All The Reasons Why You Might Have A C-Section
A Mother’s Day Garden Of Grief