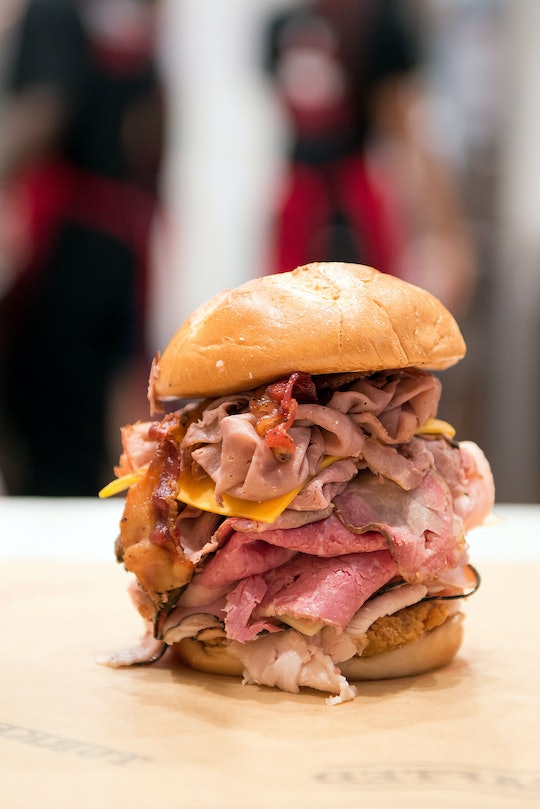 Can You Eat Your Favorite Arby's Sandwiches While Pregnant?

Pause before you stop by the drive-through.

You’re asked to sacrifice a lot when you get pregnant. First your body, then your food and drink options. Pregnant people are usually told to avoid foods such as unpasteurized milks, certain seafoods, and soft cheeses, but if you get a craving for a nice meaty roast beef sandwich, you might want to run to your local deli or Arby’s for a quick meal. But before you do so, you might also find yourself asking, “can I eat roast beef while pregnant?”

Intensely specific cravings come with the territory when you’re pregnant, but you also know there are plenty of restrictions when it comes to your nutrition and diet. So, what are you supposed to do if your baby-to-be is making you crave a classic Arby's meal with plenty of Arby's sauce? As it turns out, there are certain things a pregnant person can safely eat from the restaurant chain — however, there are also menu items that might be off-limits (including Arby’s roast beef) while pregnant.

Despite cravings, you’ll have to put some of your desires aside in order to keep you and your baby safe while you are pregnant. To break down why roast beef, along with similar items on the Arby’s menu, aren’t all that safe for a pregnant person to consume, read on.

Since most of Arby’s menu is focused on deli meats, you’ll have to be a little cautious when ordering a sandwich. Luncheon meats such as roast beef and turkey aren’t very safe for pregnant people. “Hot dogs, lunch meats, and cold cuts (when served chilled or at room temperature) are high-risk foods for contamination with Listeria,” Dr. Shannon M. Clark, M.D., fellow of the American College of Obstetricians and Gynecologists (FACOG), and professor of obstetrics and gynecology at the University of Texas Medical Branch, Galveston, tells Romper. Listeria is a bacteria known to cause food-borne illness, and it can be very harmful for pregnant people and their babies.

According to the Centers for Disease Control and Prevention (CDC), Listeria is the third leading cause of death from food poisoning in the United States. The bacteria L. monocytogenes is what causes listeriosis in immunocompromised individuals — including pregnant people, children, and the elderly — when they ingest it through improperly cooked or heated food sources, such as deli meats. "The bacterium is a big concern at the food preparation step, where cross-contamination from unclean surfaces can spread bacteria and where lurking bacteria in uncooked meat can grow during refrigeration,” Irrem Jamal, M.Sc., Long Island-based microbiologist and food safety expert, tells Romper.

You've been eating deli meats forever without getting sick, so why the fuss during pregnancy? While eating a sandwich may seem harmless, it's important to realize the risks associated with Listeria. It turns out that pregnancy puts you more at risk for getting listeriosis. The CDC found that pregnant people are 20 times more likely to get infected with listeriosis compared to people who are healthy and not pregnant.

“If a pregnant person gets listeriosis, the infection is typically asymptomatic, meaning the person has no symptoms,” Clark explains. “If symptoms are present, they are typically similar to what someone might experience if they had the flu, but with GI symptoms like diarrhea.” And while none of that sounds all too terrible for the pregnant person, Listeria can severely affect the pregnancy itself.

“Listeriosis in pregnancy can cause pregnancy loss, preterm labor, and fetal infection,” Clark says. “If infection occurs late in pregnancy, the fetus is more likely to be affected and can develop intellectual disability, paralysis, seizures, blindness, or impairments of the brain, heart, or kidneys. If neonatal infection occurs, sepsis, meningitis, and even death can result.”

How to prepare deli meat safely

Listeria bacteria can be killed if deli meats are recooked before serving. But because most restaurants like Arby’s don’t usually reheat or recook their deli meats, their cold sandwiches can put you at risk for listeriosis, especially if you are pregnant.

So, what's a sandwich-loving pregnant person to do? "The infection can be avoided by simply taking precautionary steps," says Jamal, "including trying to avoid eating uncooked meat slices and cheese made from raw milk." She suggests that during pregnancy, if you are really craving a deli meat sandwich like one from Arby's, make sure it is coming from a well-known source or facility that has good hygiene practices and serves fresh food.

Because this may be hard to gauge, you can try to ask your local Arby's to recook or reheat your meat if they can. “Many restaurants that serve sub sandwiches have the option for toasting or have a microwave,” Clark says. “It is important that these sandwiches are toasted until hot, not just warm. Listeria is killed if the temperature goes above 165°F, or 75°C. You can ask for the deli meat to be heated in the microwave for 30 seconds, or have the sandwich toasted for two cycles rather than one.”

You also have other options if you choose to eat at Arby's. They have several delicious sandwiches on their menu that should be perfectly safe to enjoy during pregnancy — ones that don't contain deli meat — not to mention other non-deli meat-related menu items. As long as you know the risks involved, you can still hit up your nearest Arby’s — just make sure it’s only your drinks that are cold.

Dr. Shannon M. Clark, M.D., fellow of the American College of Obstetricians and Gynecologists (FACOG), professor of obstetrics and gynecology at the University of Texas Medical Branch, Galveston

This article was originally published on Sep. 23, 2017