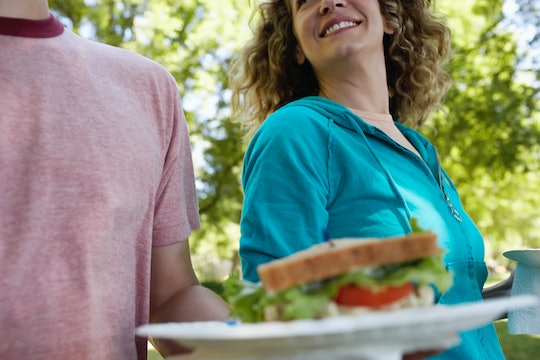 Sandwiches are seriously an underrated meal. They’re perfectly portable, filled with proteins and dairy that are nutritious for your body — and they taste damn good, too. Thing is, if you’re expecting, you might have to skip your favorite sub, as experts advise caution when eating lunch or deli meats during pregnancy.

Deli meat is usually on the no-no list when it comes to foods you can safely consume while pregnant, OB/GYN Dr. Kim Langdon, MD, tells Romper. “In general, cured (deli) meats are less healthy than cooked meats, and should be eaten very rarely, if at all,” she says. Kara Hoerr, RDN, a registered dietitian nutritionist, agrees, stating: “Deli meat is not safe for pregnant women to have as there's a risk that it may contain Listeria, a bacteria that is harmful and could result in stillbirth or miscarriage,” she says. Listeriosis is a harmful infection that can occur when eating food contaminated with the bacterium Listeria monocytogenes, per the Centers for Disease Control and Prevention (CDC). It’s particularly dangerous for older adults and, you guessed it, pregnant women.

Why Is There Listeria In Deli Meat?

Listeria is typically found in soil and water, and unfortunately, can live for many months in these environments, per the U.S. Food & Drug Administration. Add to that the fact that it can thrive in high and low temperatures (as well as acidic and salty conditions), and it makes sense that Listeria can live for a long time in not just food processing plants, but the food itself. In fact, the study “Food safety during pregnancy” found that putting deli meat in the fridge can actually allow increased growth of Listeria, since the bacteria can quickly multiply at those frigid temperatures.

Why Is Deli Meat Not Safe To Eat During Pregnancy?

Getting food poisoning is never fun, but Listeriosis during pregnancy is particularly dangerous. According to the study “Listeriosis during pregnancy,” pregnant women are at an 18 times greater risk of infection than everyone else. The cause: “Pregnancy-related suppressed cell-mediated immunity and placental tropism of L. monocytogenes.” That means that your immune system can become weaker during pregnancy, and as such, if you were to eat something contaminated with Listeria, it could cause fetal Listeriosis, which has a mortality rate of 25-35%, researchers found.

“The CDC recommends that pregnant women not consume deli meat because it can carry the listeria bacteria which can cause food poisoning, vomiting, and sickness,” Jana Mowrer, MPH, RDN, CDCES, a registered dietitian, nutritionist, and certified diabetes care and education specialist, tells Romper. “The likelihood is rare, however, still there is the chance and it is more debilitating for pregnant women and people over 65.”

Can You Safely Eat Deli Meat During Pregnancy?

Sort of. If you can’t wait to dive into some deli meat, just make sure that you pop it into the oven or microwave first, Hoerr advises. “No matter what kind of deli meat it is, in order to safely eat it, it must be heated up to an internal temp of 165 degrees F,” she says, with the goal for the sammie to be steaming hot. Also, keep an eye on expiration dates, since all food should be consumed quickly. “Deli-meat should be stored factory-sealed unopened for no more than 2 weeks in the refrigerator and, if opened, no longer than 3-5 days in the refrigerator,” Mary Wirtz, MS, RDN, CSSD, a registered dietitian nutritionist tells Romper.

But what about the Havarti, gouda, or muenster to go on that monster sandwich? “Cheeses are safe as long as the cheese has been pasteurized and isn't raw,” says Hoerr. “Most deli cheeses are pasteurized, but it never hurts to ask at the deli counter or check the package.”

And there you have it. Eating deli meat during pregnancy should be done very carefully and infrequently to avoid possibly contracting Listeriosis. In fact, you might want to leave lunch meat off of your menu until you give birth, at which point you can celebrate with a sub.