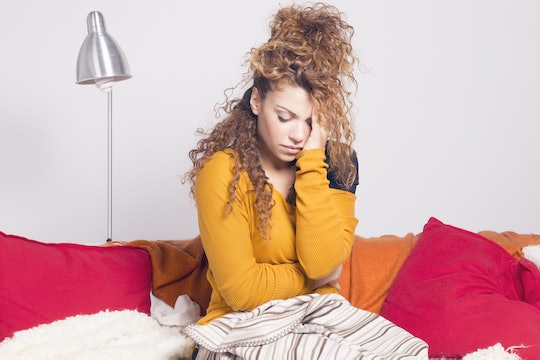 If You're Feeling Sick Without A Positive Pregnancy Test, Here's What You Should Know

Detecting pregnancy seems like it would be a black or white, pregnant or not, binary thing, but that's not always the case. This is especially true if you don't happen to be trying to conceive, and more so if you're actively trying to prevent pregnancy. In these cases, pregnancy can and frequently does go undetected far longer than for those women who are trying to put a bun in their oven. In these cases, is it possible for you to get so pregnant that you're symptomatic before you test? Can morning sickness start before you get a positive pregnancy test?

Many women, particularly those who are vigilant about birth control or who have relied on their relative inability to get pregnant have found themselves surprised to notice themselves becoming nauseated with tender breasts and hormonal skin before their period is even late. Also, women who ovulate early in their cycle, especially women who have a longer than average cycle, can begin to become symptomatic earlier than they would likely be taking a test, according to the Cochrane Pregnancy and Childbirth Group. However, because morning sickness is considered related to hCG, the hormone detected by pregnancy tests, it is unlikely that your morning sickness would develop before it's possible to detect pregnancy. But it is possible to experience morning sickness before you do detect pregnancy or miss your period.

According to the American College of Obstetricians and Gynecologists, morning sickness typically begins between the fourth week and sixth week of pregnancy. For women who are trying to get pregnant for a period of time, this is likely when you have started peeing on every stick you can get your hands on. Trust me, I speak from experience. Generally, my morning sickness begins the same week I missed my period, and I assume the nausea involved in becoming a parent will dissipate eventually. Like when they go to college or graduate from law school or when I'm dead. You know, eventually.

I spoke to certified nurse midwife Chana Meir and asked her if it's possible for morning sickness to start before you get a positive pregnancy test, and she tells Romper that it's unlikely. "Probably not. The truth of it is that the hormones that we're pretty sure cause the nausea related with pregnancy are the very same ones that are used to detect pregnancy in the blood and urine. While progesterone may play a role, there are so many other drugs with progesterone as a main ingredient that we can reasonably rule that out — not everyone on birth control or progesterone cream is throwing up everywhere." (And thank the gods for that small mercy.)

Meir went on to say, "While it is very common to start feeling pregnant and have a sense of being pregnant before you can test positive via a test, that's more a mother's intuition than anything chemical at play, due to the fact there simply isn't yet enough chemical interference on the body to cause such changes." Meir tells Romper that many, many women will have no idea they're pregnant until they become symptomatic because of irregular periods or use of birth control, but that's different. "If you're sick a week after you ovulate, it's probably due to illness or some medication that you're taking, and not because you're pregnant." Depending on how you look at it, and the outcome you're hoping for, that's either depressing or very reassuring.

If you feel pregnant, take a test or see your provider. They can evaluate why you're feeling poorly, and determine if it is pregnancy, or if you just had some dodgy diner breakfast that's repeating on you. Fingers crossed for whichever you're hoping it to be.