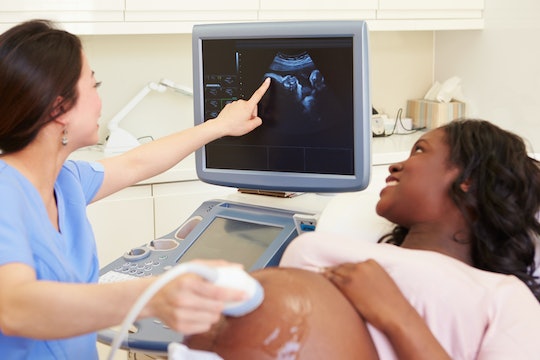 Um, Apparently Twins Can *Hide* In Ultrasounds — Here's How They're So Sneaky

We asked an expert.

When my mom and dad found out my mom was pregnant, they were both in shock, as it was unplanned. In fact, my mom was at her gynecologist's office with my dad to ask about updating her birth control. However, nothing prepared them for the shock of when Dr. Chalker said at her follow-up appointment that not only was my mom definitely pregnant, but there were two heartbeats. My dad fainted right on the floor. Clearly, my twin and I were not hiding, but can twins hide in ultrasounds? Is there any room for shock further down the road in your pregnancy? Has anyone given birth to a surprise twin, one they didn’t know was there the entire time?

On the parenting twins community forum Twiniversity, there were several mothers that said one of their twins was “hiding” and didn’t show up until much later ultrasounds. They weren’t “discovered” until 18 to 22 weeks for many of the moms. How common is this and how does this happen? I reached out to OB-GYN Idries Abdur-Rahman, one half of the the twin doctors duo from TwinDoctorsTV, to get more information about hiding twins, from a twin. Abdur-Rahman says, while pretty uncommon, you really can have a “so-called hidden twin. Hidden twins are more common with early ultrasound because the baby is of course significantly smaller than later in the pregnancy."

Plus, it depends on the type of pregnancy you’re having as well. “Hidden twins are common in mono-amniotic pregnancies, which are pregnancies in which the babies are located in the same amniotic sac. A second twin that is hidden on an early ultrasound will likely be discovered later in pregnancy during the 20-week anatomy ultrasound,” he says.

If you haven’t seen another baby before your 20-week ultrasound, you’re still not quite out of the weeds yet. But Abdur-Rahman says at the 20-week ultrasound, they’ll typically make an appearance. “Having said that, there have been cases of people not knowing that they were having twins until they actually deliver. So, while it is rare, there is no point at which you can say 100 percent for sure that there is not a hidden twin. But with later ultrasounds showing only one baby, you can be 99.99999999 percent sure that there is only one.”

Is there any way for you to know for sure you’re carrying twins, even before the ultrasound? Abdur-Rahman says not quite. “There really is no fool proof way to diagnose a twin pregnancy prior to having an ultrasound, though there are some potential clues like a higher than normal beta hCG (pregnancy hormone) levels. You can usually see a baby in the uterus on an ultrasound at about six weeks gestation, so this is the earliest that you could theoretically diagnose a twin pregnancy.”

While a hidden twin can happen — especially up until the 20-week anatomy scan — unless you don't have proper prenatal care, you typically won't have a big surprise when it comes to your delivery day, other than the typical "surprises" that come with giving birth. So breathe easy. If your doctor says you're having one baby, especially by the 20-week mark, you're more than likely just having one.