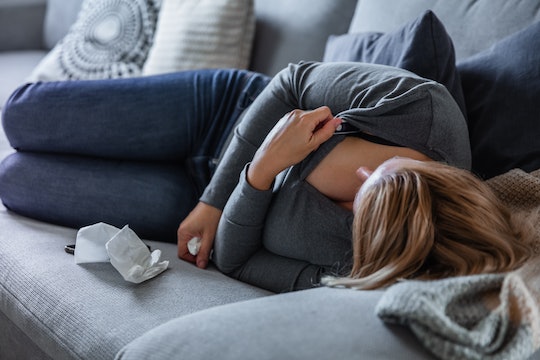 You can blame your hormones.

Those who experience the monthly cycle of ovulation and menstruation may often cope with the challenge of mood changes and cramps. Generally, it’s expected that PMS involves these possible fluctuations, but what about the role that ovulation plays? Can ovulation affect one's anxiety?

How Can Ovulation Cause Anxiety?

I spoke over the phone to Dr. Kramer, chairman of obstetrics and gynecology at Huntington Hospital Northwell, who has been in practice for over 30 years, and has had experience with patients with mood-related concerns regarding their menstrual cycles. I asked him how ovulation might impact anxiety. “It’s a varied response,” he says, “... the likelihood of ovulation decreasing anxiety is on the lower side. In my experience and in general when you look at the hormonal changes that occur during ovulation, it can cause some emotional lability,” meaning quick or profound shifts in mood.

The way your mood could be affected by ovulatory hormonal changes is highly individual and can be complex. “We know that some people are exquisitely sensitive to these hormonal changes. Some people can have mood elevation, some people can have depression. You typically see more in the way of anxiety in response to those hormonal levels," Dr. Kramer says. "Elevated mood can happen when serotonin is elevated during ovulation, and when that drops during the end of the cycle, you can get adverse mood changes as a result,” he explains. And as to why these mood issues often culminate right before your period, “Most women will ovulate around day 15 of their cycle. When you don’t get pregnant, those hormone levels drop about a week before the period, and that can cause PMS symptoms.”

A study in Hormones and Behavior found that progesterone, which normally fluctuates throughout a woman’s cycle, can also play a role, with higher levels of progesterone being linked to greater anxiety.

How Severe Is Ovulation-Induced Anxiety?

More severe effects on mood due to ovulation are less common, but can occur, such as Pre-Menstrual Dysphoric Disorder (PMDD). PMDD, like PMS, is responsive to hormone levels triggered by ovulation, but has more pronounced emotional symptoms, such as, "severe depression, irritability, and tension," according to the Office on Women's Health. PMDD is treatable, so bring it up with your doctor if you feel your PMS symptoms are severe.

Typically, it’s not the actual physical release of the egg during ovulation that can cause anxiety. It's the interactions between hormones and neurotransmitters, which affect brain functioning. "Sex steroids affect mood and anxiety by mediating changes in neurotransmitter systems in a diverse array of brain regions," the journal Psychiatric Times states. In other words, menstrual-related hormones can change the levels of neurotransmitters in the parts of the brain that regulate mood, which can then cause anxiety.

“It’s the hormonal changes, not the physical action of ovulation, that can cause mood changes,” says Dr. Kramer. But in some cases, ovulation itself can cause discomfort. “Some people have ovulatory pain... and like any pain, it has the potential to cause some anxiety. But most people find that they have it every cycle, and so they come to expect it." However, the level of anxiety is typically not significant, he explains.

What Can You Do About Anxiety During Ovulation?

If you do have issues with anxiety or discomfort during ovulation, you don’t need to suffer in silence: Inform your doctor or OB-GYN, who can help you find a solution. Dr. Kramer explains that, when it’s safe to prescribe for his patients, “We actually recommend the use of birth control pills to alleviate ovulatory pain. By the same token, since the birth control pills eliminate ovulation, they can also modulate the hormonal changes associated with ovulation, and in turn can help with the mood changes and anxiety associated with your cycle.” So if you’re concerned about mood changes or discomfort during your cycle, you can let your health provider know so you can work together to find the best treatment plan for you.

This article was originally published on Sep. 10, 2019