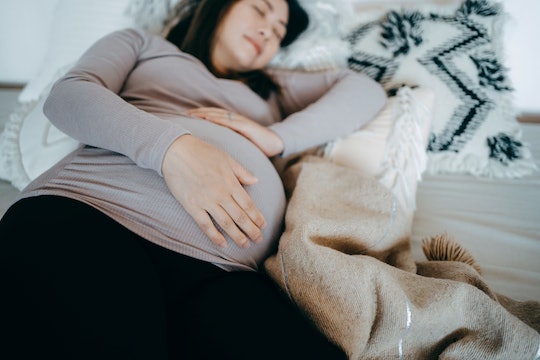 Dreaming Of Fish? What They Mean If You’re Pregnant — Or Trying To Be

So that’s why you're dreaming of tuna and salmon...

So many things become more intense when you’re pregnant, like the smells and tastes of certain foods. But what you might find surprising is that your dream state also gets pretty pumped up when you’re pregnant, causing you to have some vivid and very realistic dreams about anything and everything. So if you find that sole and salmon are swimming through your subconscious at night, here’s why you’re dreaming about fish during your pregnancy.

If you think that you’re the only pregnant person having dreams where she’s longing for lobster, think again. “It is obvious for a pregnant woman to get anxious and baffled if she sees weird dreams during such a changed phase of her life,” Dr. Nereida Gonzalez-Berrios, MD, a board certified psychiatrist tells Romper. “But frankly speaking, dreams are symbolic representations of our waking life, and fish dreams are super common visions during pregnancy.” Phew. Here’s why.

“Dreaming of fish—whether by the woman or a person close to the woman—predicts a pregnancy is an old wive’s tale that many people speak of,” Stephanie Gailing, an astrologer and author of The Complete Guide To Astrological Self-Care tells Romper. “How it came to pass makes sense; after all, fish are seen as a symbol of fertility because of the large amount of eggs that they lay.” But does it mean that you are expecting or will be? It’s possible, since fish dreams symbolize water and birth. So in short, “A fish dream could mean that a pregnancy is looming or has occurred,” says Gailing. But it doesn’t not a definite indication.

They Symbolize The Fetus

Think about it: your fetus is basically swimming around in water, so it’s not much of a stretch to see your little baby as a bass, for example. “The dream symbolizes the fetus as a water-dwelling being, just as the fishes living inside water bodies,” explains Dr. Gonzalez-Berrios. “This dream theme carries a positive message for the dreamer as it represents creation, nurturance, and sustenance.” So if you think about your baby snuggled up inside the womb surrounded by water, a fish dream makes sense.

They Represent Foods You Can’t Eat

It can be stressful to know what you can — and can’t — eat during pregnancy. And some fish, (particularly the predatory kind like shark, swordfish, king mackerel, and tilefish, for example), aren’t safe to consume during pregnancy due to their high levels of mercury, the Mayo Clinic reported. “Fish dreams may occur in part due to the prohibition of eating mercury-high foods during pregnancy,” Courtney Douds, a psychoanalyst and licensed clinical social worker tells Romper. That’s why if you have a hankering for halibut or find yourself fiending for flounder, you might be worried about ingesting something that could be harmful for your fetus. And as such, you might experience a nightmare or two about cod or catfish.

They Can Signify Your Hope For The Future

Know the expression, “Babies are a blessing”? Well, that just might be what your fish-related dream means. “The dream can mean that your baby will bring good luck, success, and prosperity in life, since the dream symbol of a fish during pregnancy also signifies growth and abundance,” says Dr. Gonzalez-Berrios. That growth could be related to your baby (and your belly) getting bigger, or just your hopes and dreams for your little one.

They Can Reflect Childhood Memories

Pregnancy dreams can serve as a portal back to when you were younger. “Perhaps it brings up a memory of fishing, of seeing fish in a doctor’s office as a child, or of a former pet goldfish,” says Douds. She suggests trying to see if the shape or color of the fish leads to any other thoughts or memories. “The images from our dreams often serve the function of a rebus, a hidden code of puns and associations that lead you far from the starting point of ‘fish,’” which means that your fish dreams might not be all that fishy at all.

A Symbol Of Good Luck

“When it comes to dreams of fish, this depends on the spiritual beliefs of the dreamer, as well as the emotions felt during the dream and how they relate to or feel about fish in general,” Phoenix Knor'malle, a psychic advisor on Mysticsense.com tells Romper. “Traditionally, the Chinese believed that dreams about fish indicated good fortune and luck, especially true if the fish is swimming upwards towards the surface.” More than likely, your subconscious is trying to remind you of how fortunate you are during your pregnancy — which might offer some small sense of solace if you find yourself puking a lot.

Predicting The Gender Of Your Baby

In many instances, dreaming about fish can simply mean that you’re connected to your kiddo, Kristy Lynn, a dream interpreter and founder of Luciding tells Romper. “Fish are often thought of as a sign of fertility, so it makes perfect sense that a pregnant woman is having dreams of fish,” she says. “If the fish you're dreaming about is black, then it's said that you're set to give birth to a baby boy. Otherwise, the dream signifies the birth of a baby girl.”

They Could Be A Warning

While any dream can be open to interpretation, when your fishy tale becomes a nightmare, then it might mean something more serious. “Generally speaking, fish dreams are positive - unless it's a dead fish that you're dreaming about,” says Lynn. Knor’malle agrees, adding: “A dead fish in a dream can represent loss of fortune, a warning or stagnation.” If it only happens once, it’s probably nothing to worry about, but if you keep having the dream, you might want to speak with your ob/gyn or midwife… just in case.

When you’re pregnant, you can expect to have some pretty intense and realistic REM time. But if you’re dreaming about fish, try to find the connection to what it really means to you. In the end, it just might be a reflection of this new stage in your life — and that grilled salmon you had for dinner.