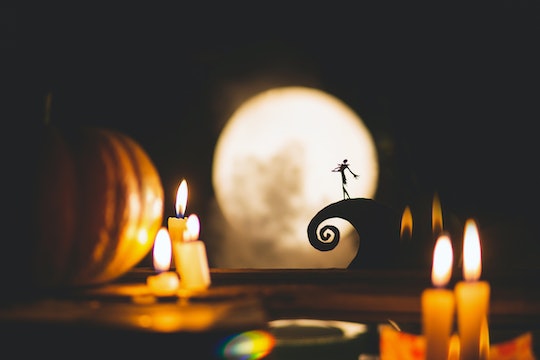 Throw The Best 'Nightmare Before Christmas' Baby Shower With These Ideas

For your baby boo!

Baby showers are almost always tooth-achingly sweet affairs. From the pink and blue decor to the over the top fondant cakes, everything is sweet sweet sweet. But maybe that’s not your style. Maybe you like things a little more edgy. That’s where the Nightmare Before Christmas baby shower theme comes in.

Based on Tim Burton’s 1993 stop action dark musical comedy The Nightmare Before Christmas, the film is a cult-classic for those who like their animated features on the spooky side. Spoiler alert: the movie follows Jack Skellington, of Halloween Town as he uncovers Christmas Town and decides to take over Santa’s duties for him and bring a Halloween Town Christmas to Christmas Town. Still following? Hijinks, as they say, ensue (like when Jack is shot down by the military and lands in a cemetery).

While it might not be the first idea to come to mind when many think “baby shower plans,” those who love the movie will appreciate a host’s sense of humor and commitment to focusing on their guest of honor’s interests.

So how does one master the ultimate Nightmare Before Christmas baby shower? First, watch the movie — that’s a no-brainer. Then consider these tips and tricks to pull it off.

To give your party site the right Nightmare Before Christmas vibe, you definitely will want to deploy plenty of pumpkins. But don’t forget some of these additional items as well. You can doctor up your space with Jack Skellington swag like coasters, paper plates, and even paper lanterns. Not to mention tablescape decor and even themed cake toppers. With these items you can give your home the proper Nightmare vibe.

Music for a Nightmare Before Christmas Baby Shower

You could go in a few directions with the music for your Nightmare Before Christmas baby shower. But don’t overlook the fact that the movie is a musical — the soundtrack will always be a sure thing. Barring that, there are plenty of other options. Just think about what goes on in the film to get you inspired.

Set the tone right off the rip with some thematically creepy invitations. These vendors have the look and feel of Nightmare Before Christmas all figured out. A spooky shower starts the moment a guest opens an invite. So how do you let them know exactly what to expect? Have Jack Skellington’s face peek out of the paper. Or send them a note with a Victorian-looking baby carriage surrounded by bats. Go the extra mile with some creepy postage, like these Halloween-themed stamps that are available now at usps.com.

Other than opening presents and eating cakes, most showers include activities and games. And you can involve the Nightmare Before Christmas idea in those as well with these ideas. The sky’s the limit when it comes to crafting your own DIY diversions, but ultimately you’ll want to tie in the film in some way.

Want to extend your theme to gifts? Great news. There are loads of great Nightmare Before Christmas gift options available that are baby-themed. You could even go in on a big gift basket of these items with a few of the baby shower guests. Etsy vendors have truly outdone themselves when it comes to creative Nightmare Before Christmas baby shower ideas. Consider the monthly growth calendar blanket, for example. Any super fan of the film would love this clever way of sharing their child’s milestones while showcasing their Nightmare fandom.

What’s a party without a delicious cake? But if you’re hosting a Nightmare Before Christmas shower, youcan’t just serve any old cake. You need something that really suits the theme. Dark and delicious, of course. Consider these tasty treats and toppers for DIY or purchasable sweets.

You can’t send your guests off without a little sucrée to say thanks for coming. But if you’re hosting such a specific shower, framed around a classic cartoon movie, what exactly does that include? It could be socks or a mini bottle of champagne, ornaments or bubbles. Below are some baby shower party favors perfect for a Nightmare Before Christmas themed event.

Once you’ve got this checklist covered, get ready to scare that baby into the world.

More Like This
From Sexy To Spooky, These Pregnant Halloween Costumes Will Make An Impression
Rainbow Baby Shower Ideas To Celebrate A Very Special Baby
The 16 Best Affordable Maternity PJs & Lingerie Sets On Amazon
The Cutest Petite Maternity Clothes From Amazon Under $40

This article was originally published on Oct. 2, 2021