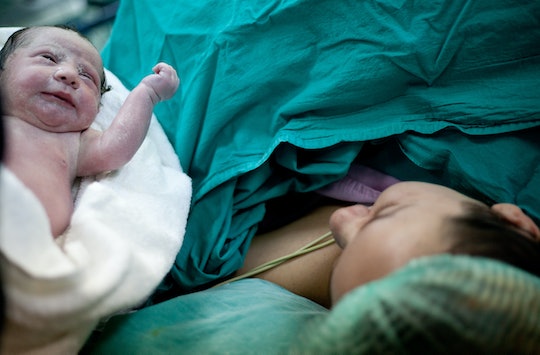 Can You Really Choose To Have A C-Section? Here's What You Need To Know

Why they’re done, who can request them, and what the process looks like.

When you’re pregnant and your doctor gives your baby a due date, the reality is that it’s really anyone’s guess when the baby will actually arrive. However, for parents who opt for planned cesarean sections, there isn’t the same level of anxiety or guesswork attached to their baby’s due date because they know well ahead of time when their baby will arrive. But can you choose to have a C-section? While being able to schedule your baby’s birth is a nice perk, a planned C-section is still an invasive surgery, so it’s far from a luxury experience.

Can you choose to have a C-section?

In the U.S. in 2020, a little over 31% of all deliveries were C-sections, according to the Centers for Disease Control and Prevention (CDC), but that number is made up of both planned and unplanned/emergency C-sections. For women who are experiencing a normal pregnancy and who have never had a C-section before, it’s usually advised they plan to deliver vaginally (with a C-section being an option in an emergency situation). For pregnant people who have undergone a prior C-section, it’s not uncommon for their provider to suggest a planned C-section for delivery, as vaginal deliveries after a C-section often carry risks, as reported by the American College of Obstetricians and Gynecologists (ACOG), though it is possible to deliver vaginally after a previous C-section birth.

All of that being said, you do not need to have had a prior C-section in order to request a planned C-section. Whether or not your provider will move forward with that request or not will depend on your pregnancy, your health history, and the risks of the procedure. The likelihood of a planned C-section varies from person to person — but you can always ask your doctor if they’d be willing to consider this option for you.

Why would someone need a planned C-section?

While simply requesting a C-section is reason enough for some doctors to deliver this way, Michael A. Belmonte, M.D., an OB-GYN and fellow with Physicians for Reproductive Health, tells Romper there are a variety of other reasons why someone would need a planned C-section. “Fetal condition or birthing person condition that prevents safe vaginal delivery such as certain infections, heart conditions, or fetal abnormalities” are reasons he says someone may need a planned C-section. Other situations he says may require planned C-sections include “when the fetus is too large, when there are multiple fetuses... [or] when there is a concern for abnormal placentation.” Additionally, he notes that planned C-sections are common for birthing parents who have delivered via C-section in the past and a subsequent vaginal delivery is deemed too risky.

What is the process of a planned C-section?

In terms of process, the primary thing that sets a planned C-section apart from a vaginal or emergency C-section delivery is the lack of urgency. With a planned C-section, parents will know when they need to show up at the hospital, who will be performing their surgery, and generally what to expect. Shannon Clark, M.D., MMS, OB-GYN and spokesperson for the American College of Obstetrics and Gynecology, explains that even the prep process for a planned C-section is different from an unplanned/emergency procedure. “The patient will be advised to be NPO (nothing by mouth) after a certain time in anticipation of the surgery,” she explains. “After arrival, the patient will be seen by the surgeon and anesthesia for counseling and signing consents [then] the patient will go to the O.R. for placement of anesthesia” before undergoing the procedure. It’s all very formulaic. However, Belmonte notes, “the surgery itself is typically unchanged despite the speed at which they are performed.”

The upside to a planned C-section is that it offers a sense of control that most vaginal deliveries don’t, but it’s important to get all of the information and assess the risks before deciding to move forward with one. Talk to your provider about your options and share the reasons why you’re considering a planned C-section so that the two of you can determine the best course of action for you personally (and your baby).

Shannon Clark, M.D., MMS, OB-GYN and spokesperson for the American College of Obstetrics and Gynecology

More Like This
All The Reasons Why You Might Have A C-Section
Here's The Best Time To Remove Your C-Section Tape
A C-Section Actually Doesn't Take As Long As You Think, According To Experts
Can The Way You Sleep Really Turn A Breech Baby?