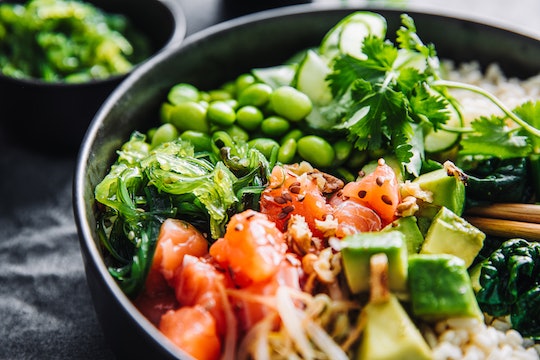 It may not be worth the risk.

For sushi lovers, there’s nothing better than sharing a meal of different sushi rolls split up amongst a group of friends. Or, if your go-to order starts to get old, enter poke bowls — another way to enjoy of raw fish. Poke bowls have attained somewhat of a cult status in recent years, so much so that everyone seems to crave one every once in a while, but are they safe for those who are expecting? Can you eat poke while pregnant?

Poke bowls encapsulate some of the most popular tastes of sushi with a twist in presentation: The rice, sauce, various vegetables, and raw fish are served together in a bowl. Poke is a traditional Hawaiian dish — in fact, the word itself is Hawaiian for “to slice or cut” in reference to the bite-sized pieces of marinated fish (traditionally ahi tuna or octopus) that top the rice. Today, though, the yummy island dish can be found in shops just about everywhere for everyone to enjoy and using different varieties of fish.

Some health experts go back and forth on the issue of fish consumption — both cooked or uncooked — during pregnancy. On one hand, fish is full of nutrients that pregnant people could benefit from. “If one could be sure it’s free if toxicants and toxins, seafood would be a wonderful option for pregnant people,” Dr. Felice Gersh, M.D., board-certified in both OB-GYN and integrative medicine, tells Romper. “Seafood provides excellent quality protein and lots of healthful omega-3.”

Omega-3 fatty acids, “particularly DHA, [are] important for fetal brain development,” Dr. Rebecca C. Brightman, an OB-GYN and assistant clinical professor at the Icahn School of Medicine at Mount Sinai, previously told Romper. For this reason, the FDA actually recommends fish intake during pregnancy, advising pregnant people to eat seafood roughly two to three times per week from choices that are lower in mercury. King mackerel, marlin, shark, swordfish, and bigeye tuna are among the types of fish that contain high levels of methylmercury, which can be harmful to an unborn baby, according to the FDA.

Instead, there are other seafood options that are considered safer. “Small fish — herring, sardines, anchovies, and others — are far less likely to contain heavy metals,” Gersh says. “But [they] are likely to have other toxicants.” And for that reason, some doctors are more precautionary when it comes to recommending any form of seafood for pregnant people. “Ocean fish can have high amounts of mercury, PCBs (forever chemicals), and microplastics,” Gersh continues. “Shellfish can also contain toxicants, and pathogens such as bacteria, fungi, and viruses such as hepatitis. Raw fish can harbor a variety of pathogenic and infectious agents that can harm both the mother or her baby.”

Typically, poke is considered very nutritious. With rice, vegetables, and fish, it’s a pretty balanced meal. However, when it comes to pregnant people, as with sushi and sashimi, the controversial element in poke bowls is obviously not the rice or the vegetables; rather, doctors typically caution those who are pregnant against consuming raw fish. Yet, there are people around the world who do not typically give up their diet of fish during pregnancy. So, what is a pregnant person supposed to do?

Can I eat poke while pregnant?

For the most part, eating poke while pregnant is something doctors advise against. “It’s not a very good idea for pregnant people to consume fish,” Gersh tells Romper. “It’s especially a bad idea to consume any raw fish.”

The reason doctors recommend avoiding raw fish is that is poses health threats to both the person expecting — because pregnancy makes you immunocompromised — and the unborn baby. “There is a small but real risk of acquiring of a very dangerous infection by eating raw fish — including ceviche, sushi, or sashimi,” Gersh says. And the same obviously goes for poke. “One could acquire an infection with a bacteria or virus,” Gersh continues. “Listeria is one such infection, which can trigger a miscarriage, stillbirths, early deliveries, and even neonatal death.”

While listeria is definitely the most common health risk you’ll hear about when it comes to consuming a lot of different foods — soft cheeses, deli meats, and raw eggs are big ones — during pregnancy, it’s not the only concern. “Hepatitis can also be acquired, along with other infections from any pathogen,” Gersh says. “Non-infectious agents such as heavy metals, microplastics, and PCBs can also be present in cooked foods.”

The one solution a pregnant person can turn to if they want a poke bowl is to choose cooked fish instead of raw fish to top the rice, which some restaurants do offer in place of traditional raw seafood. Overall, though, it depends on your willingness to take a risk. “Cooked fish is safer overall, compared with eating raw fish, but cooked fish can still create problems,” Gersh says. “Cooked fish can harbor toxic levels of mercury and PCBs.” Mercury-related conditions are not very prevalent in the U.S., so the risk is low, which is why the FDA views the benefits of eating cooked fish while pregnant as outweighing the risks. Still, the threat is not zero. When it comes down to it, pregnant folks must decide for themselves which risks they are and are not willing to take when it comes to food and drink consumption.

If you're really craving a poke bowl, considering opting for a nontraditional one that features cooked fish that is low in mercury levels (resources can be found here). However, if you really want to play it safe, you may want to consider avoiding seafood altogether. Navigating this landscape can be difficult, as a lot of it comes down to individual choice, so if you do have questions and concerns, definitely talk to your health care provider for more personalized advice.

This article was originally published on Feb. 16, 2018