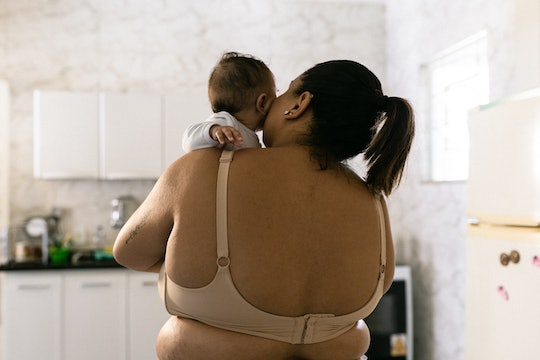 Everything You Need To Know About Postpartum Blood Clots

The causes, signs, treatments, and more.

Blood clots, also called thrombus, are not something to dismiss. They happen when a mass of blood platelets, proteins, and cells stick together when blood changes from a liquid to a partial solid, and can be dangerous when they don’t dissolve on their own. They can block the blood stream and prevent blood from reaching organs, leading to a heart attack if it takes place in a coronary artery, a stroke if in a cerebral artery, or a pulmonary embolism if a blood clot breaks free and travels to the lungs. Following pregnancy, people who have experienced childbirth are at risk of postpartum blood clots.

Part of the reason why the postpartum period is a more dangerous window for blood clots is that, by nature, pregnancy slows down circulation thanks to expanding uterus putting pressure on the veins behind it. “This is also partly because of hormonal changes during pregnancy and postpartum,” says Dr. Maryam Tarsa, M.D. and Clinical Professor for the Department of Obstetrics, Gynecology & Reproductive Sciences Division of Maternal Fetal Medicine at University of California, San Diego. “Overall, patients up to 6 weeks postpartum are at higher risk for clotting.”

“Pregnancy increases abnormal clotting by a factor of 5 to 50 times,” says Tarsa. Fortunately, postpartum blood clotting is not very common: less than 1 in 10,000 people experience postpartum blood clots, according to a study published in the New England Journal of Medicine. Still, it’s important to know the causes, signs, and treatments for it.

Postpartum women are at risk for two types of blood clots:

It’s important to understand that postpartum bleeding via the vagina is normal. The body is in recovery mode and shedding blood is part of that healing process. However, excessive bleeding or large clots are cause for concern. Here’s how to know the difference between the two types of clotting, and how to spot a potentially dangerous clot.

What causes a postpartum blood clot? The Virchow Triad is the medical term for what’s at play during the postpartum period. This, Tarsa says, is the combination of:

On top of all of this, “sometimes clotting happens because a certain percentage of population can have clotting for inheritable reasons. For example, a genetic disorder that puts them at risk,” adds Tarsa.

“There can be many causes, and we define them as being either within the first 24 hours from delivery or 24 hours from delivery to 12 weeks from delivery,” says Dr. Lisa Shanahan, D.O., an OB-GYN for the Department of Obstetrics and Gynecology at NYU Langone Health. “Specifically, this is defined as either primary postpartum hemorrhage or secondary postpartum hemorrhage. When patients are at home and have change in their bleeding, we are considering what the secondary causes could be.” Those, Shanahan says, include the following:

When it comes to signs of a possible postpartum blood clot, a key indicator for the vaginal variety is “bleeding that causes you to fill a pad completely in one hour, then again fill a pad in one hour for a second hour in a row,” explains Shanahan. “It could also be if you pass large (we say around a golf ball size) clot repeatedly or feel lightheaded/dizzy/short of breath. These are all signs you are bleeding too heavily and should call your doctor immediately.”

The signs of a potential blood clot in the veins is trickier to identify. “Sometimes patients can show up with shortness of breath or difficulty breathing,” says Tarsa. This may also be accompanied by chest pain.

On the other hand, if a postpartum patient is on the cusp of a stroke due to a blood clot, they might complain of a headache, says Tarsa. “Or sometimes the nuance of the drooping of the face on one side, along with difficulty swallowing or speaking,” she adds.

Treating postpartum blood clots, be it in a vein or vaginal clotting, starts with diagnosing the issue. Once the diagnosis is made, treatment typically includes the following steps.

Doctors may give medications, called uterotonics, to make the uterus contract more and stop the bleeding from the blood vessels at the placenta site, says Shanahan. Or, a patient may need what is called a suction dilation and curettage (D&C). Also known as a D&C, this surgical procedure involves a suction curettage introduced into the uterus. The retained tissue is then removed by suction.

“If infection is the cause, you would require antibiotics as well as possible uterotonic medications,” Shanahan says. Lastly, if you have a coagulation disorder, you may receive replacement products in an IV or other medications that can help improve your clotting factors.

Treatment for postpartum blood clots in veins are a different story. An ultrasound may be administered to determine where the blood clot is if, say, it’s affecting the lower extremities including the legs. “For lungs and a stroke, that requires a CAT Scan,” says Tarsa. “An MRI might be the diagnosing choice for a blood clot in the head.”

In each case, once a diagnosis has been made, “the treatment is anticoagulation, or blood thinners,” says Tarsa. These may be given in IV form for acute clots or via twice daily intravenous injections. This is to prevent clots from progressing. “There are also oral medications that can be given,” says Tarsa.

Relief isn’t necessarily instantaneous, however. “Sometimes you might remain symptomatic for a few days. And in that case, a patient may be admitted to the hospital to ensure they’re stable,” says Tarsa.

Maintenance of therapy, adherence to the medication, and close followup is the key to proper clot healing.

The next step? Know your family medical history and share it with your obstetrics team. “Any significant family history of what we call thromboembolism, basically the technical term for clotting, should be disclosed to your obstetrician,” says Tarsa. “Then you could appropriately be screened for genetic factors that can predispose you to this risk.”

“An example of this is called von Willebrand disease,” adds Shanahan. “Signs prior to pregnancy that you could have a coagulation disorder include prior postpartum hemorrhage, significant bleeding related to surgical procedures, bleeding with dental procedures, increased bruising or nose bleeds over a period of time, or a family history of bleeding disorders.”

Should you notice anything concerning in your body during the postpartum period it's important to not minimize your symptoms and reach out to your care professionals as soon as possible to get treatment and avoid a more serious complication.

Dr. Lisa Shanahan, D.O., an OB-GYN for the Department of Obstetrics and Gynecology at NYU Langone Health

More Like This
Pitocin Induction: What It Is & The Play-By-Play
When Does Pregnancy Horniness Kick In?
Is Swimming Safe During Pregnancy? Here’s What To Know
OB-GYNs On How The End Of Roe Changes How They Can Care For Us