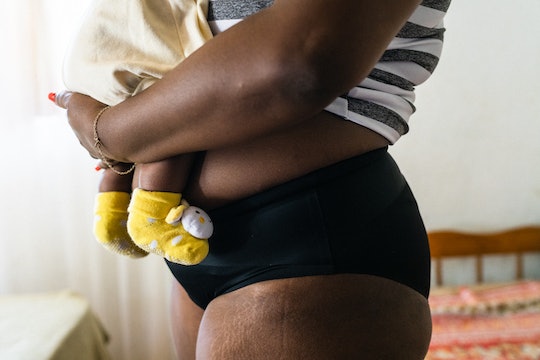 Breaking Down The Different Types Of Postpartum Infections

It’s important to stay healthy for you and your baby.

Postpartum infection is something no one wants to go through. At the moment when a parent is at their most vulnerable, in recovery, and attempting to care for a newborn, the unwanted symptoms of any recovery complication during the postpartum period can interrupt and throw off everything. But armed with information, a postpartum patient can better prepare should a postpartum infection present in the body.

What is a postpartum infection?

“Postpartum infection is a pretty broad category that would include any infection in the postpartum period, which we generally consider to be at least the first six weeks postpartum,” says Sutton. The three that afflict mothers the most are endometritis, cesarean section incision infection, and mastitis. “The most common ones are an infection of the uterus called endometritis, a C-section infection, and then another kind of infection that can happen, especially when someone is breastfeeding, is called mastitis, and that's an infection in the breast,” explains Sutton.

Of course, there are less common postpartum infections — for instance, urinary tract infections caused by catheters — that we’ll discuss below.

“Postpartum infections can happen after someone has left the hospital or they could develop while they're still still in the hospital,” says Dr. Sutton.

And the risk factors might surprise you. The first, she says is someone who had their water broken for a long time while they were in labor. Next, if someone was in labor then had to have an emergency C-section that poses a higher risk of infection. Both of these could cause the aforementioned endometritis. But let’s look at each of the three main infections individually:

“Endometritis is an infection in the uterus,” says Dr. Samara Gibson, an OB-GYN affiliated with DMC Hutzel Women's Hospital. “More specifically, the endometrial layer, the inner part of your uterus.”

“The bag of water or the amniotic sac that's around the baby is a pretty good barrier to bacteria ascending from the vagina up the reproductive tract into the area around the baby,” Sutton explains “But once the amniotic sac breaks, then there's no longer that barrier. And infections can move up the reproductive tract or like up the vagina into the uterus.”

When this happens, the area can become infected. Endometritis, Gibson says, can also result from a miscarriage when fetal tissue is left behind.

How would you know if you have endometritis? “The most common complaint is belly tenderness and fever,” says Dr. Gibson. The pain will make the belly tender to the touch. “And when it gets really bad, you have a foul odor and discharge from the vagina.”

And, unfortunately, endometritis can occur even during labor if a woman’s water has been broken for a significant amount of time. In that case, doctors may apply IV antibiotics during delivery.

If a patient exhibits these issues at home after delivery, the treatment plan will be based on the severity of the infection says Dr. Gibson. “We can treat it with oral antibiotics or IV and it goes away fairly quickly.”

A C-section incision infection is when the incision, or cut along the belly during a C-section surgery, becomes infected.

There are a lot of factors that come into play in whether or not the area will become infected. “Women who are overweight or have obesity can have a more challenging wound healing because that incision is right often where people carry that extra weight,” says Dr. Sutton. She adds that patients with diabetes might be more prone to postpartum C-section incision infection as well as that disease impedes wound healing. A lack of cleanliness is the biggest concern as this is a large wound that when uncared for may become exposed to bacteria and infected.

A fever will almost certainly accompany a C-section infection or endometritis. For the former, you should also be on the look out for the following:

Following doctor’s orders regarding treating a C-section incision are paramount to avoiding an infection, says Gibson. But that doesn’t mean skipping follow-up appointments because you think you’ve got it all under control. “You need to keep that appointment,” Gibson says. That’s because your care provider will do a thorough examination of how your incision is healing properly and triage any signs of potential infection.

If an infection does flare up, call your doctor immediately. “We’ll try oral antibiotics first,” says Gibson. “I'll tell the patient to keep the area clean and dry, maybe even use peroxide to keep the incision clean.”

Depending on the severity of a C-section infection, a patient may have to have a hospital stay. “Sometimes they have to be in the hospital for a few days to receive IV antibiotics,” says Sutton. It depends how badly their incision has been disrupted if the incision has opened up or has to be opened up to let the infection out.” That would require more intervention that could include a drainage tube to allow the infection to drain over time or reopening the C-section to inspect and remove infected tissue.

Mastitis is another very common postpartum infection that happens in the breast(s). “A lot of people end up with infections in their breasts, and that's because they're either breastfeeding and they'll get a clogged up, or maybe even a baby has a yeast infection in their mouth and that can go back and forth between the nipple,” says Gibson.

“Mastitis is often caused by bacteria that may have just been on the skin that naturally gets into the breast and causes an infection,” says Sutton. “The other risk factor is a plugged breast duct. So if you have a blocked duct and there's milk building up, that may serve as a means for infection.”

“Any type of crack or a tear in the breast also can lead to mastitis,” adds Gibson.

With mastitis, Sutton says the key indicator is the breast will feel painful, hot, swollen, or have a firm red area. There might also be discharge from the nipple. It’s important to note that it rarely presents on both breasts, Sutton says. You’ll also likely have a fever and feel a bit fluish with chills and body aches.

When it comes to mastitis, Sutton says, an oral antibiotic will typically solve the problem, though there may be continued discomfort while taking the medication and that’s because suspending breastfeeding or pumping is highly discouraged.

“If you stop breastfeeding or pumping, it will actually make the mastitis worse because there will be buildup in that breast,” says Sutton. If it’s truly to painful to nurse, Sutton often advices her patients to use a warm compress to express their milk or express in a hot shower where they might get a bit more relief.

Unfortunately, postpartum infections aren’t limited to the big three listed above. “You still have the common infections that everybody gets,” says Gibson.

The aforementioned UTI, or urinary tract infection, is often caused by a catheter — a tube inserted into your bladder to allow urine drainage. But this isn’t limited to labor and delivery. UTIs are the most common type of healthcare-associated infection, according to the National Healthcare Safety Network (NHSN). Noted by pain in the bladder or burning while urinating, thankfully, oral antibiotics can treat the infection within a few days.

There’s also a possibility of lung infection. “That's when your lungs essentially fill up with fluid and can get infected because you're not physically taking deep breaths like you usually do because of a C-section,” says Gibson.

Any other common infections that hospital patients contract, like staph, are also possible. The best way to prevent these from occurring is to following your doctor’s care instructions, maintain cleanliness, and listen to your body.

What to do if you think you have a postpartum infection

“If the patient feels like something is wrong, even if they're not sure what it is, but they're just like something does not feel right, please, please call because we take that very seriously,” says Sutton.

The longer you wait to get medical attention, the worse an infection can get, so it’s worth it to see your provider.

And Sutton has one more big tip: buy an adult thermometer. “You probably got a baby thermometer at your shower, but you need one for you, too,” she says. That way, if you feel off, you can start to figure out the problem by answering the simple question: Do I have a fever? This is the first step in prioritizing your health and protecting yourself from postpartum infection at the same time.

“These infections aren’t anything to freak out about,” says Gibson. But you should arm yourself with knowledge, she adds, so that if you feel off, you can recognize the signs of possible infection and seek treatment.

More Like This
Are Movie Theaters Too Loud For Pregnant People? OB-GYNs Explain
All The Reasons Why You Might Have A C-Section
Here's The Best Time To Remove Your C-Section Tape
All Your Questions About Getting Pregnant After A Tummy Tuck Answered