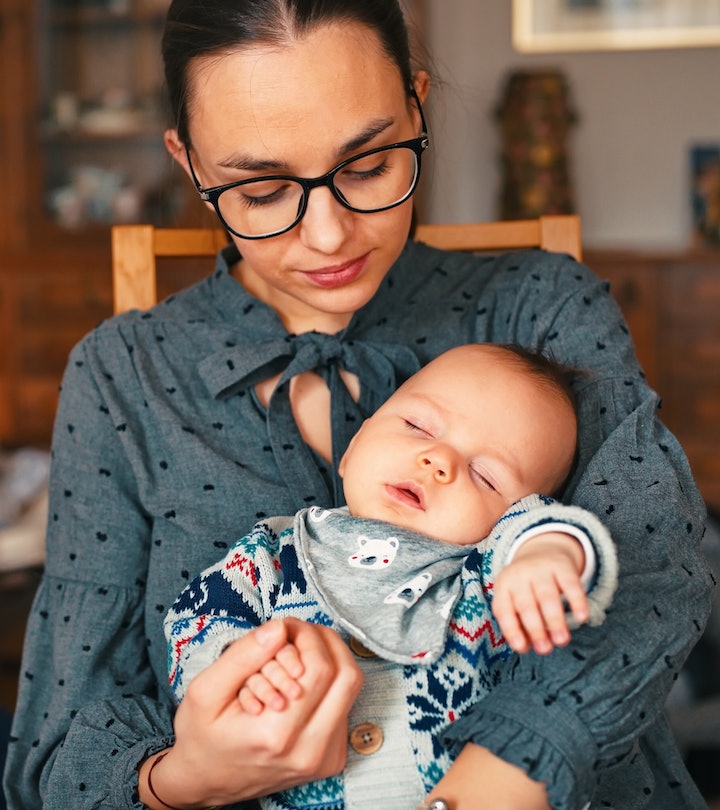 Babies Are Heavy, Y’all — Postpartum Joint Pain Is A Thing

But here’s how to tell if your pains are more serious than you think.

I have to admit, there is so much post-pregnancy weirdness I never knew anything about. There are the smaller physical changes, like hair loss, or wetting your pants when on a trampoline. And then there are the bigger problems, like having postpartum joint pain and potentially developing postpartum rheumatoid arthritis. Joint pain is obviously not something new moms want to be coping with while caring for a newborn, which is why many women's first concern is what’s causing it, followed by how long it can last.

Joint pain during pregnancy isn’t anything new. Pregnancy carpal tunnel can cause a lot of pain, and pregnancy-induced arthralgia — defined as subjective pain on joints — occurred in 22% of 157 pregnant women with no history of rheumatic diseases, according to a study from the American Journal of Obstetrics & Gynecology. Hip pain, legs, back — all of it hurts in those last few months of pregnancy thanks to the added weight of your baby, but when the pain lasts postpartum, what does it mean?

There is a type of joint pain that can occur post-pregnancy, Dr. Scott Zashin, a rheumatologist and widely-respected arthritis expert, tells Romper, and this one is actually quite common and has nothing to do with hormones. "The condition is called De Quervain's tenosynovitis, and it affects the tendons and not the joints. It develops in the wrists of young mothers who are constantly picking up their kids, especially as they get bigger. Treatment of this includes avoiding the precipitating activity, splints, and or anti-inflammatory medication."

If you’re worried that your pain might stick around even longer, Zashin doesn’t think you should fret — postpartum arthritis is uncommon. (So bear that in mind before you start imagining phantom pains in your wrists.) But when it does happen, Zashin says it's a result of "certain hormones that go up with pregnancy. RA — rheumatoid arthritis — often goes away during pregnancy, only to rear its ugly head soon after delivery, or upon the cessation of breastfeeding."

Of course. Our blasted hormones. They're to blame for everything.

In terms of how long postpartum RA lasts? Well, unfortunately that's a bit harder to answer. Dr. Nilanjana Bose is a rheumatologist with the Rheumatology Center of Houston, and she says that gauging the duration of the illness can be tricky. "If this is a new onset inflammatory arthritis, then this may progress to a full blown disease process. Whereas others may develop a transient inflammatory arthritis which may resolve in a few months."

Bose agrees that hormonal fluctuations and stress are possible triggers for postpartum RA and joint pain. Though she also says some women may simply be genetically predisposed to developing it.

The treatments for RA can vary. The Mayo clinic cites a variety of medications, including standard anti-inflammatory drugs, as well as steroids and biologics used to help diminish symptoms. Though they also list non-medicinal treatments, like occupational therapy and exercises. (Which, if you're breastfeeding, may feel like the safer option.)

And sometimes, joint pain isn’t really a “postpartum” thing as much as it is a result of things you’re doing postpartum, like not getting enough sleep, carrying around a baby all day, and even breastfeeding. Breastfeeding can deeply affect your back, shoulders, and wrists and the American Academy of Orthopaedic Surgeons noted that back pain from carrying your baby around is very common and treatable.

But no matter what, Bose says the first step a concerned mom should take with her joint pain is to seek an evaluation with her primary care doc, and then potentially see a rheumatologist to get a full blood work-up if the issues are more dire than “my baby is really heavy all day.”

I have to say I am shocked I never developed De Quervain's tenosynovitis, as my son has always been enormous, and at the playground when he skinned his knee, I felt certain I looked like I was doing some sort of World War I reenactment — carrying an injured soldier off the battlefield. Anyway, I think it's helpful to know about the condition, as what you suspect is RA or a more serious joint issue might just be from hauling your kid around all day. But even if it is postpartum arthritis, the good news is that along with the numerous treatments available, there is also a lot of information and support to be found.