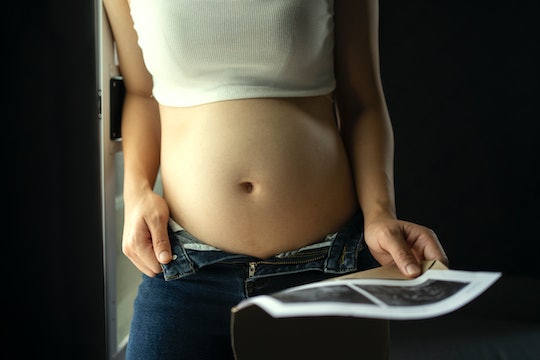 These Positions Can Actually Help Pregnancy Gas To Go Away

While you might attribute your burgeoning bump to your growing fetus, there’s probably another kind of buildup happening in your abdomen as well — gas. Yes, pregnancy flatulence is as fun as it sounds, but unlike normal gas, it seems that pregnant women seem to have pockets of it… and it can be super painful. So if you’re looking for a more efficient way to fart, these are the best positions to relieve pregnancy gas.

If you’re finding that you’re letting one rip a lot more these days, you’re not alone. Tsao-Lin Moy, a Chinese medicine expert and author of Will I Ever Get Pregnant, The Smart Woman’s Guide To Get Pregnant Naturally Over 40, says that passing extra gas is common during pregnancy. “Pregnant women experience more gas and bloating during pregnancy because of the increased hormones that help the baby grow,” says Moy. “Hormones such as progesterone and relaxin released during pregnancy cause muscles to be more elastic so gases can build up causing bloating and flatulence.”

And, of course, there’s a lot less space in your stomach because of your baby growing, which can also attribute to your need to toot more. “As the baby gets larger it presses against the stomach and can cause acid reflux and burping, less space in the abdomen and pressure on the intestines can cause gas build up,” says Moy.

If you’re for the best way to break wind, these positions can help get the gas up — and out.

Doing Squats Can Help Break Up Gas When You’re Expecting

So what are the best positions for relieving pregnancy gas, according to moms who've been there? Charlotte Wright, 34, tells Romper she got the most relief from doing squats. "Something about weighted squats really helped move things along. That, and drinking a ton of water. I'd hold a 25-pound weight and do several reps at a time and repeat the process all day."

Felicia Tryon, 31, of Akron, Ohio, tells Romper that movement helped her — she'd keep walking. "I noticed it was inevitable that I'd fart when I was walking around anywhere, especially if I didn't want to, so I started taking a preemptive strike by going for long walks in the morning to move it all out before I hit up the grocery store or went to work. It was better to pass gas outside at the park than while I was in the stacks re-shelving books."

If you want to maximize not just your movement (but encourage the passing of gas), Moy also recommends moving after eating a meal. Not only does it aid in digestion, but it can help get the gas out as well.

Nurse Sandra McMasterson, 35, would rock back and forth on her bum while hugging her knees. "I would sit down, draw my knees up in front of me, giant cannonball-style, and rock back and forth," she tells Romper. "It's a lot like how you get your baby to fart when they're infants, only a lot trickier to stand up from."

Put Your Legs Up To Break Up Gas Pains

Gas pains are nothing to laugh at, and sometimes you’ll do anything to be able to break wind. Stephany Strachiochelli, 32, tells Romper: "I would lie on my back with my legs up on the wall in front of me and shimmy my *ss. It worked sometimes, but not all. I also did a lot of stair climbing, because it seemed to help. Bonus points if my husband or 3-year-old was behind me."

Now, if you’re worried about being on your back during pregnancy, don’t be. While not all of these positions are one that a pregnant woman should hold for a long period of time, like lying supine, according to Positional Therapy in Obstructive Sleep Apnea, the American College of Obstetrics and Gynecology's opinion on exercise does not prohibit lying on your back for short periods of time.

Listen, no one is saying that you have to do a one-handed tree pose, but there are some yoga positions that can help get rid of that gurgling in your tummy. Stretching can surely help get the gas moving — and make you feel better, too. “Make sure to move and get some exercise to help the gas to release,” advises Moy. “Yoga and gentle twisting from one side to the other can help release gas that gets trapped.”

Get On All Fours To Get The Pregnancy Gas Out

“Gas is always uncomfortable, but when you're pregnant and your intestines are squished up above the baby and pressing into your ribs, it can be even more challenging to relieve gas pains,” Jada Shapiro, birth doula and founder of boober, tells Romper. “A great position to try is the ‘butt up in the air’ pose.”

Here’s how to do it: Start on all fours, then slowly lower your chest to the floor or bed, making sure your butt is higher than your belly. (This often allows some of the gas to move and get released.) But be sure to listen to your body when you’re doing a gas-relieving (or any) pose. “When pregnant, it's always important to take new positions slowly and if it doesn't feel right in your body, discontinue trying the pose,” she says.

Gas pains during pregnancy can be annoying at best, excruciatingly uncomfortable at worst. If the pain is severe, you should always speak to your OB/GYN about it. If it’s just a gas pocket, be sure that you eat a healthy diet, stay physically fit, and before long, you’ll be farting and feeling fine again.

Tsao-Lin Moy, a Chinese medicine expert and author of Will I Ever Get Pregnant?: The Smart Woman’s Guide To Get Pregnant Naturally Over 40

This article was originally published on Dec. 6, 2017