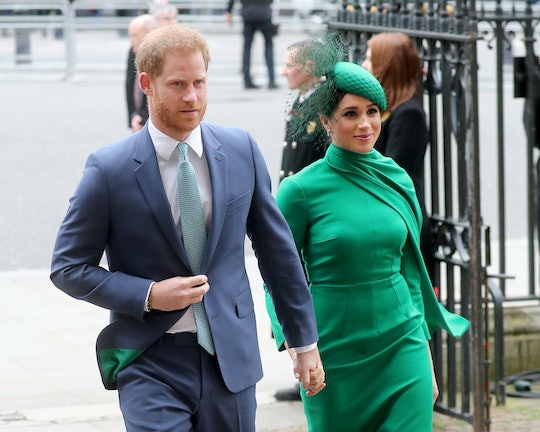 She wrote about the "cycle of solitary mourning" around miscarriage

On Wednesday, the Duchess of Sussex shared a beautiful, heart-wrenching, and above all incredibly generous essay about experiencing a miscarriage over the summer. It was a real departure for the intensely private mom of one to be so open about her pain, and it appears she had some encouragement behind the scenes. Prince Harry supported Meghan Markle's miscarriage essay because he believed it would be a good way to help other families who had experienced the same pain, according to royal expert Katie Nicholls, and he was clearly spot on.

As Meghan Markle wrote in an essay for The New York Times called "The Losses We Share," she experienced a pregnancy loss in July after feeling a "sharp cramp" one morning while caring for her 1-year-old son Archie, "I dropped to the floor with him in my arms, humming a lullaby to keep us both calm, the cheerful tune a stark contrast to my sense that something was not right. I knew, as I clutched my firstborn child, that I was losing my second."

According to Nicholl, Prince Harry was one of the driving forces behind his wife's decision to write about her painful experience because, as she told True Royalty TV’s The Royal Beat, "Harry said (to Meghan) ‘I think you should write about this miscarriage because if we can help another family going through this then it is a reason to do it.'"

The New York Times confirmed Prince Harry's support of his wife on social media by writing, "Prince Harry and Meghan Markle made a decision to talk about their experience."

Markle explained in her essay that her own loss made her see how difficult it can be for mothers who might not have any outlet to share their own grief. "Losing a child means carrying an almost unbearable grief, experienced by many but talked about by few. In the pain of our loss, my husband and I discovered that in a room of 100 women, 10 to 20 of them will have suffered from miscarriage. Yet despite the staggering commonality of this pain, the conversation remains taboo, riddled with (unwarranted) shame, and perpetuating a cycle of solitary mourning."

Prince Harry was apparently not the only member of the royal family to offer his support. While there was no official statement offered from any of the royal houses, that doesn't mean they weren't supporting the couple privately throughout their ordeal. Nicholl told the BBC, as per Newsweek, "Harry was in constant touch with them over the summer and they knew what they were going through. My understanding is they've been supported by the royal family on this episode."

Moms who experience pregnancy loss need support. They need to know they can talk about their suffering, and that they are surrounded by people who love them and will help them heal.

Meghan Markle has that with Prince Harry. And with her essay, she is making sure other moms have it too.