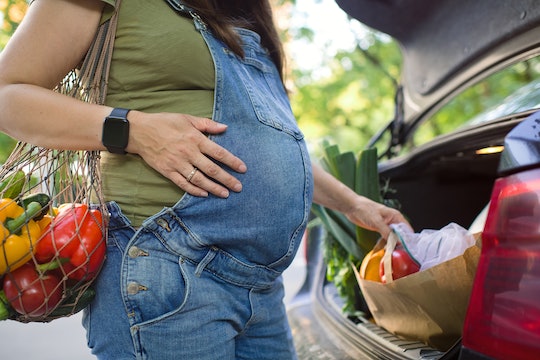 Round Ligament Pain Is Normal, But Tell Your OB If You Have It

Ah, the joys of pregnancy.

When you get pregnant, you go into it knowing your body will change. We’ve all heard that you may gain or lose weight, you get a dark line on your belly, and maybe your feet swell from time to time. But there are plenty more bodily adjustments coming your way than that, and one of them — that sharp pain you get in your lower abdomen every time you even think about moving — is just one of the aches and pains that’s part of being pregnant.

What Is Round Ligament Pain?

If you’re just learning that you even have ligaments down there, let alone that they can hurt, that’s normal. Round ligament pain itself is normal, too.

“Round ligament pain is pelvic discomfort that is typically localized on the left, right, or both sides of the pelvis,” says Kendra Gillespie, M.D., board-certified OB-GYN at Baptist Medical Center Jacksonville, in an interview with Romper. “It’s due to the stretching of the round ligaments, which are ligaments that start on either side of the top of the uterus and travel down to attach the uterus to the sides of a woman’s pelvis. As the uterus grows, there is pulling on the ligaments that triggers pain. It typically starts in the early second trimester and can continue until the end of the pregnancy.”

“It is probably the second most common compliant of pregnancy after nausea,” says Victor R. Klein, M.D., MBA, OB-GYN and vice chairman of Obstetrics & Gynecology at North Shore University Hospital, in an email to Romper. “The pain could be sharp, stabbing, or simply an ache, and may only occur when suddenly moving. It can last for seconds or, at times, hours.”

When Does Round Ligament Pain Go Away?

When exactly round ligament pain starts and ends can be unique to your body, your baby, and how everything is growing and moving during your pregnancy. For most people, it resolves itself pretty quickly.

“The majority of pregnant people will say it subsides usually by the end of the second trimester,” Megan Gray, M.D., OB-GYN at Orlando Health Physician Associates, tells Romper in an interview. “It usually lasts a few weeks and then goes away.”

What Can I Do For Round Ligament Pain Relief?

“Treatment would be rest, [wearing a] supportive band, and Tylenol,” said Klein. “Some patients have obtained relief with yoga or stretching.”

Gray says that Tylenol is the safest option for over-the-counter pain relief while pregnant (as always, no ibuprofen allowed), and that warm showers and stretching work well too.

Should I Tell My Doctor About My Round Ligament Pain?

These OB-GYNs agree that any time you have abdominal pain while you’re pregnant, it’s always a good idea to let your doctor know. It’s their job to make sure it really is just those pesky ligaments and not something more serious.

“If you have pain that feels out of the ordinary for you, always reach out to your OB or midwife,” says Gray. “It’s always better to try and figure out the source of the pain than sit and wonder what’s going on. Most people are just scared and want to know it’s not a miscarriage, because it’s around that time period at the end of the first trimester. That’s part of why I always recommend getting checked out — because it’s just not worth that mental stress.”

“One important thing to differentiate is round ligament pain and signs and symptoms of labor,” Klein says. “Pelvic pressure, painful, regular contractions, or tightening of the abdomen that doesn’t resolve in a short period of time needs evaluation by an obstetrical provider. Anything that’s constant, regular, or associated with bleeds also needs to be evaluated by a health care provider.”

More Like This
Pelvic Pain During Pregnancy: What Causes It & How To Deal With It
What Is Acid Reflux Tape? Chrissy Teigen Swears By It
40 Lovely, Lively, Lavish Girls Names That Begin With “L”
37 Summer-Inspired Names For Your Totally Laid-Back Baby Boy