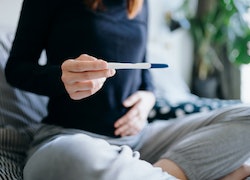 Don't Freak Out If The Line On Your Pregnancy Test Vanishes

When you finally spy those two lines on a pregnancy test you’ve been wishing oh-so-hard for, you’re bound to be absolutely elated. But when you lovingly look at the test a few hours later, you might be shocked to see that one of those dear little lines has started to fade, or (gasp) has completely disappeared. Try not to freak out, because vanishing lines on a pregnancy test happen, and here’s why.

How A Pregnancy Test Works

Before you start shakin’ that stick like an Etch-A-Sketch, it’s important to understand how a pregnancy test works in the first place. When you’re pregnant, your body produces a hormone called human chorionic gonadotropin (otherwise known as hCG), Planned Parenthood reported. Typically, hCG is found in the body when a fertilized egg attaches itself to the lining of the uterus. A pregnancy test can detect the hCG hormone — and if two lines appear, voila, you’re preggo.

At least, that’s how it’s supposed to happen. But sometimes, a pregnancy line disappears, and it could happen for a variety of reasons, Dr. Kameelah Phillips, MD, an ob/gyn tells Romper. The biggest one: you’re probably super excited and testing a little too early. "If the pregnancy is very early, the hCG level in your urine may just meet the threshold for being detected,” explains Dr. Phillips in an email to Romper. “You will see a faint line that can disappear over time.” So when’s the best time to test? Probably around three weeks after fertilization, What To Expect reported.

The study “Accuracy of home pregnancy tests at the time of missed menses” found that in order to get the most spot-on result, the hCG concentration in urine has to be around 12.5 mlU/mL to get a 95% accurate reading — and only one in the 18 pregnancy tests used in the study had that sensitivity. So wait a little while longer so that you get the right result the first time.

Reason #2: Your Pregnancy Test Is Old

Another reason why your pregnancy test result changes seemingly overnight might have nothing to do with you, but rather the age of your exam. “Although the issue of the disappearing second line is unusual, you can see it if the test is an old test kit which could have dried out over time,” Dr. Mary Jane Minkin, MD, Clinical Professor of OB/GYN at Yaletells Romper. “I usually recommend to my patients to use an active test kit.” If you’re not sure if yours is still active or not, you should always look at the pregnancy test’s expiration date (and yes, they do have one, Healthline reported) to ensure it will give you the most accurate results.

Reason #3: You Waited Too Long To Read Pregnancy Test Results

Waiting to see if your pregnancy test result is positive or negative can be the longest minutes of your whole damn life. But even if the anticipation is nerve-wracking and exhilarating at the same time, try not to wait too long to read the results, Dr. Phillips advises. "If the test was weakly positive, then a faint line can fade if left too long before interpretation," she says. "It is important to interpret the results during the recommended time frame." So even though all you might want to do is pee on the stick already, just know how long your test result will be accurate before it could potentially change. And if you’re not sure, you can always take another test.

And then, there’s the serious side of disappearing lines on a pregnancy test. Sometimes, a pregnancy loss can register a positive result, and then change later, Dr. Kim Langdon, MD, an OB/GYN tells Romper. “It might have been a chemical pregnancy and therefore you probably aren’t pregnant if the test turns negative,” she says. A chemical pregnancy, (also known as a biochemical pregnancy) is a very-early pregnancy loss (before or near 5 weeks), Miscarriage Association reported. And because some tests are so sensitive, they might be able to pick up on the pregnancy hormones despite the fact that you’re no longer pregnant. Dr. Phillips adds: "When you have a miscarriage, the levels of hCG drop, then, over time, the intensity of the line will fade.”

If you’ve taken a pregnancy test that has turned from positive to negative, try not to panic (easier said than done). You can always retest in a day or two with a fresh new test, or even contact your OB/GYN to get a blood test. That way, you’ll know the real results and can plan accordingly.

This article was originally published on July 15, 2017