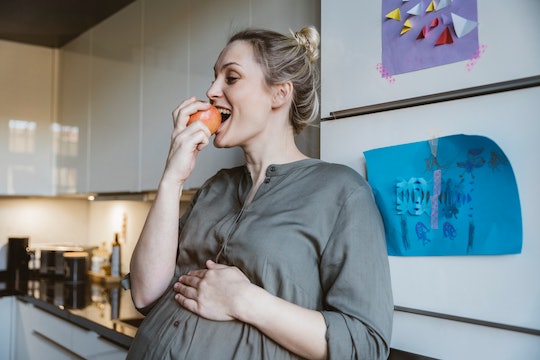 Why Can't You Eat During Labor? There's A Legit Reason

Here’s what the experts have to say about snacking.

If you’ve ever seen the letters “NPO” on your medical chart, you might know that it means “Not By Mouth” from the Latin phrase nil per os. This three-word phrase is why you may have been told you can’t eat during labor. A long-held worry about aspiration during delivery was initially the reason for this rule, but as times have changed, anesthesia has evolved, and research studies have continued, this rule has begun to go by the wayside. Which might leave you scratching your head wondering, so why can’t I eat during labor?

Why you can’t eat during labor

Doctors have discouraged pregnant people from eating during labor to avoid aspiration since the 1940’s, wrote Rebecca Dekker PhD, RN on the website Evidence Based Birth. This became popular practice during the heydays of twilight births, a form of delivery which involved giving a woman a blend of pain medication and a memory-erasing medication which made them sleep through labor.

“When I was first being trained, that was definitely the dogma, once you’re in labor you can’t eat or drink because it’s dangerous,” says Dr. Jessica Kingston, M.D., Clinical Professor and Chief of the Division of Obstetrics and Gynecology at UC San Diego Health System. “The fear was that if a woman was under general anesthesia and she had a lot of food in her stomach she could then aspirate which is when the food goes from your stomach into your windpipe and that can be very dangerous.”

But that’s not the case anymore.

“We’ve learned over time that that fear is pretty unfounded and we can liberalize oral intake during labor,” Kingston says. Which is to say OB-GYNs across the country are changing course on this idea and modifying policies to allow for eating during labor in most healthy delivery patients and on a case by case basis.

New rules for eating during labor

As research evolves, so do medical norms and in 2015 the America Society of Anesthesiologists published a report titled “Most healthy women would benefit from light meal during labor.” The research cited showed that aspiration during labor was nearly nonexistent with only one case between 2003 and 2013. It also found that women benefited from light caloric intake to maintain their energy through the grueling labor process.

“It’s an old practice that the evidence no longer supports,” she says. “The medications they use now are less likely to make you vomit and when people do, they protect the airway more.” The tools used for intubation have advanced dramatically decreasing the possibility of aspiration in the first place.

What you can eat during labor

That said, you probably shouldn’t gnaw on a cheeseburger mid-contractions. And Kopas says if that’s what you’re craving, then you’re likely not really in labor yet.

“When you’re in labor, that doesn’t look good anyway,” she says. What can be helpful to eat during labor, however, are clear liquids that have some calories in them, say apple juice or broth. She says she many patients bringing in coconut water as well to get a little bit of energy.

“I know doulas who will bring patients honey sticks to suck on,” Kopas adds. The idea is to get a little something in your body, but not necessarily to indulge in say a foot-long sub sandwich.

“I think the best policy is you can plan for oral hydration like clear liquids, clear juices with no pulp, popsicles, Jello sometimes is fine too, and really light snacks, not heavy, high fat or high fiber,” says Kingston.

But don’t assume your birthing center or hospital will be up to date with the new evidence regarding eating during labor. You need to remember to listen to your body’s needs and advocate for yourself as necessary, Kopas and Kingston say.

Ask about eating during labor policies

“Labor and delivery units that are more up to date and more academically minded are probably allowing their patients and low risk patients to have clear liquids during labor and even eat small snacks,” says Kingston. “I was induced and I remember arguing with my obstetrician about it saying ‘I want to have a smoothie.’” That was 19 years ago, however she says. “We’ve come a long way.”

But even with new research proving the NPO practice for labor is outdated, some care providers might be of the old mindset.

“It’s something women should ask their doctor or midwife about during prenatal care,” says Kingston. And if you get push back, Kopas says bring in research or find another provider who is more up to date on the data to treat you.