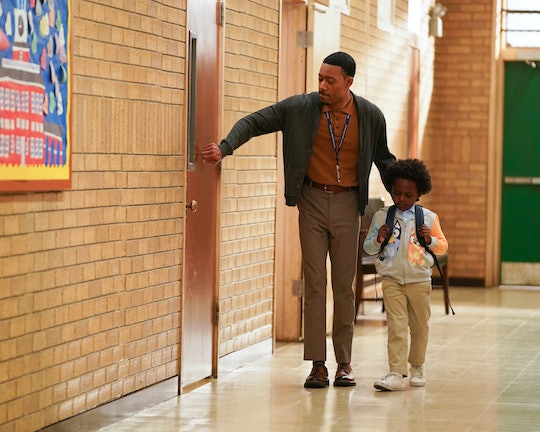 Wackadoo! What a fun surprise!

It’s sort of amazing that this has not come up before on Abbott Elementary, to be honest. Especially in Gregory’s classroom full of first graders who are at the prime age for it. In the latest episode of Abbott Elementary, Gregory (or Mr. Eddie, played by Tyler James Williams) finally comes face-to-face with an issue parents and teachers of young children everywhere have been dealing with for ages. A kid who cannot stop talking about Bluey. And this is truly the crossover everyone needed.

Note: Spoilers for Abbott Elementary Season 2, Episode 4 “The Principal’s Office” are ahead.

This week’s episode of Abbott Elementary saw Gregory trying to teach his classroom about ice melting into water when Micah, one of his students, yells out “Mum!” in an Australian accent. He continues to disrupt the class by shouting “I love Bingo!” which is, of course, the classic sign that Micah is all about Bluey. “This is not the first time Micah has disrupted my class,” Gregory explains. “From what I understand, he is obsessed with a show about Australian dogs. Blue-ish or something.”

He finds out soon enough that the show is called Bluey just because he keeps talking about it so often. At his wit’s end, Gregory eventually sends Micah to Principal Ava’s office, which does absolutely nothing.

So what does he eventually do? Exactly what he should have done in the first place. Embrace the Bluey and make it part of his class. Just as the rest of us have simply embraced Bluey. And fans of both shows were so happy about the crossover they couldn’t stop talking about it.

One fan tweeted their appreciation for “Gregory implementing Bluey in class instead of asserting his dominance to gain respect.” Another was not impressed, however, with Gregory accidentally calling the show “Blue-ish.”

This children’s librarian identified with being “haunted” by Bluey every day.

Another person was totally on Micah’s side for loving Bluey.

I think it’s safe to say we all learned some important lessons in the latest episode of Abbott Elementary. That discipline does not always work as well as embracing a child’s personal needs. That teaching first graders can get out of hand in an instant. And most importantly, that perfect television does exist when seamless crossovers like Abbott Elementary x Bluey happen. We’re all winners here.

More Like This
Rubble From 'PAW Patrol' Is Getting His Own Spinoff Series Full Of "Messy Demolition"
20 Heartwarming Episodes To Help Prepare Your Child For A New Sibling
Exclusive: 'Firebuds' Dives Into Hanukkah Traditions In Festive New Episode
Here’s How To Watch 'A Charlie Brown Christmas' This Holiday Season