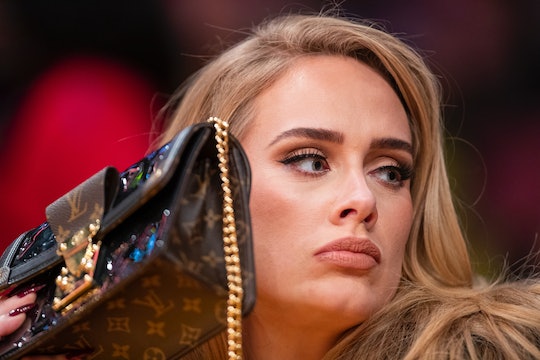 “They humanized me because I had avoided talking to anyone that was ever famous in any capacity.”

Now that Adele and her 9-year-old son Angelo have settled in Los Angeles, she’s awfully far from home. Far from family, far from friends back in the England. But don’t worry, she’s finding a new way in California. Adele has made some solid celebrity mom friends, and she credited them with helping her to feel more “humanized” after years of avoiding friendships with fellow famous people.

In an interview with Rolling Stone ahead of the release of her upcoming album 30, the singer opened up about two important new friendships in her life: her neighbors Nicole Richie and Jennifer Lawrence. Richie is a mom of two while Lawrence and her husband Cooke Maroney are expecting their first child together. So now Adele has her own set of celebrity mom friends, and she’s really loving it.

“They humanized me because I had avoided talking to anyone that was ever famous in any capacity, because I was like, ‘Well, I'm not famous.’ I'm very British like that," she told Rolling Stone. “We never spoke about work, which was amazing, because most of the time when I catch up with someone, they want to know all about my work, and I'm like, 'I don't want to talk about that. Can we talk about something else? I'm knackered.’”

Adele and Richie’s friendship has been on display on fellow friend Lauren Paul’s Instagram when the three women took off for a Las Vegas getaway in 2020. Paul thanked Adele for helping her on her “journey as a new mother” in a birthday post to the singer, and Richie was seen posing for photos with the two moms.

Mom friendships are important, especially for someone like Adele going through a divorce from ex-husband Simon Konecki. Although things seem to be going well between the two as they try to navigate co-parenting Angelo. Konecki lives across the street from the “Easy On Me” singer, and Adele told Rolling Stone that things are pretty “normal” between the two of them. “We do normal, normal things on the weekends. I'll take him to the parties, all of that. We'll do school drop-off.”

Just imagine Adele dropping her son off at school then heading out for coffee with Nicole Richie and Jennifer Lawrence. Maybe planning a baby shower or something. Life sounds pretty great for the singer, all thanks to some celebrity mom friends.