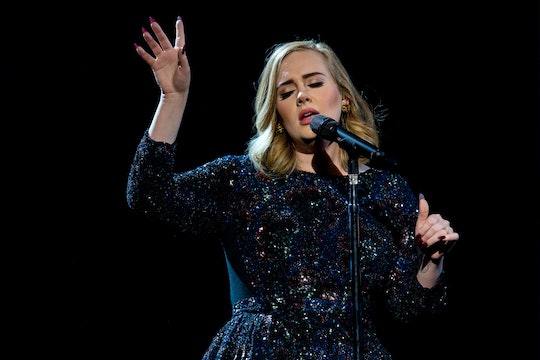 “Your brain goes a bit mushy.”

When Adele became a mother in 2012, everything in her world changed. This is true for most parents, of course, but the “Easy On Me” singer has found a way to put into words the complicated, difficult struggle so many of us recognize. In a new interview with Face magazine, Adele opened up about her own battle with postpartum depression and while every experience is different, the singer’s words hold a universal truth that will resonate with so many other moms.

Back in 2017, when her son Angelo was just 5 years old and she was still married to ex-husband Simon Konecki, Adele admitted at that year’s Grammy awards that she had “lost a lot of myself” when she became a mother. In her interview with Face magazine, she elaborated.

“Giving, giving, giving, to a baby or a toddler, when they can’t even f**king talk to you, your brain goes a bit mushy,” the “Rolling In The Deep” singer explained. “You’re not stimulated very much. In that, I also got really quite bad postpartum depression, or postnatal as we call it [in the UK].”

She continued, “I think it was just… Not the pressure, but what kind of parent do you wanna be? No one wants to be like their own parents, no matter how great parents they were or not. You learn how to be a parent on the go. Or you start reading books, and that’s not right either, because it’s someone else’s experience of it and they’re all completely different.”

Adele opened up about postpartum depression.

Adele went on to say that she missed the life she had before she became a mom, missed “my friends, my hobbies, the things I like doing without a baby.” But as Angelo got older, things got significantly easier on her. “As they get older, you can take them everywhere with you and they can tell you if they’re not enjoying something, what they want, if they’re hungry or if they have a tummy ache, whatever,” she told Face. “It’s way easier to navigate once you can really communicate with them. He’s about to turn nine and he’s getting to the point now where he’s got opinions.”

If you’re lucky like Adele, your kids are also there for you. After her divorce, the singer told Vogue that Angelo ended up helping her get through the difficult time as much as she helped him. “He said to my face, ‘Can you see me?” Adele explained to the magazine. “And I was like, ‘Uh, yeah.’ And he was like, ‘Cause I can’t see you.’ Well, my whole life fell apart in that moment. He knew I wasn’t there. That’s when I started sharing with him.” That’s the pot of gold at the end of the rainbow right there.

More Like This
Josh Duhamel Is Glad He Took Fergie's Advice About Dating After Divorce
Julia Fox’s Apartment Tour Is Peak Mom Realness
Dealing With Postpartum Back Pain? Physical Therapists Share Their Tips
Pelvic Floor Exercises You Can Do At Home To Stop The Spritz
What Parents Are Talking About — Delivered Straight To Your Inbox