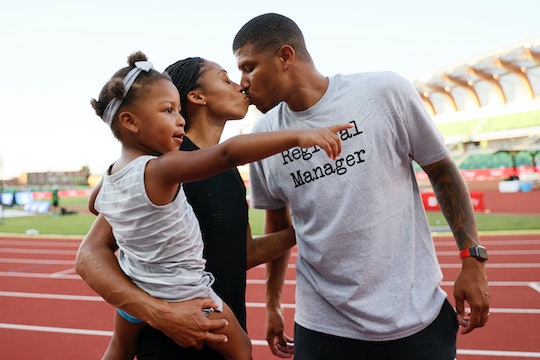 Allyson Felix walked down the aisle for a second time, just after her daughter. The most-decorated track and field Olympian recently renewed her wedding vows with her husband, Kenneth Ferguson, and their daughter, Camryn, was the most adorable flower girl.

ESPN journalist Ramona Shelburne shared footage of the ceremony on her Instagram, which showed 2-year-old Camryn walking down the aisle and Felix making her majestic entrance down a grand staircase at The Ebell of Los Angeles. Camryn was adorably dressed in a white gown with a matching white bow on her head. A note was pinned to her dress that read, “Daddy here comes mommy.”

“Two of my favorite people @allysonfelix and @supermanferg renewed their vows today and it was more beautiful than these photos can capture,” Shelburne posted.

Felix also shared the moments on her Instagram. “Renewed my vows to my best friend in front of our loved ones,” the seven-time Olympic gold medalist wrote. “It was more than I could have ever imagined. So thankful to God for this love and for blessing our family.”

The 35-year-old wore a JINZA Couture gown with sheer sleeves, while Camryn’s dress was basically a mini version of her mother’s.

Felix and Ferguson first tied the knot in 2018. That same year, they welcomed Camyrn and in the months following, the Olympian helped bring attention to Nike’s lack of maternity protections for its athletes. In 2019, Felix told the New York Times that Nike refused to guarantee maternity protections, following the birth of her daughter and only offered her 70% of her pay, versus her full payment prior to becoming a mother.

Felix has since parted from Nike and partnered with Athleta to create her own athletic lifestyle brand called Saysh. Her bronze medal at the Tokyo Olympics in the women’s 400-meter race was her first medal worn since becoming a mother.

Although her daughter maybe a little too young now to understand her accomplishments, everything Felix does is to ensure she has a better future. “Becoming a mom,” she told Romper earlier this year, “it shifted my focus to thinking about this world that my daughter will grow up in. I don’t want her to have the same battle.”