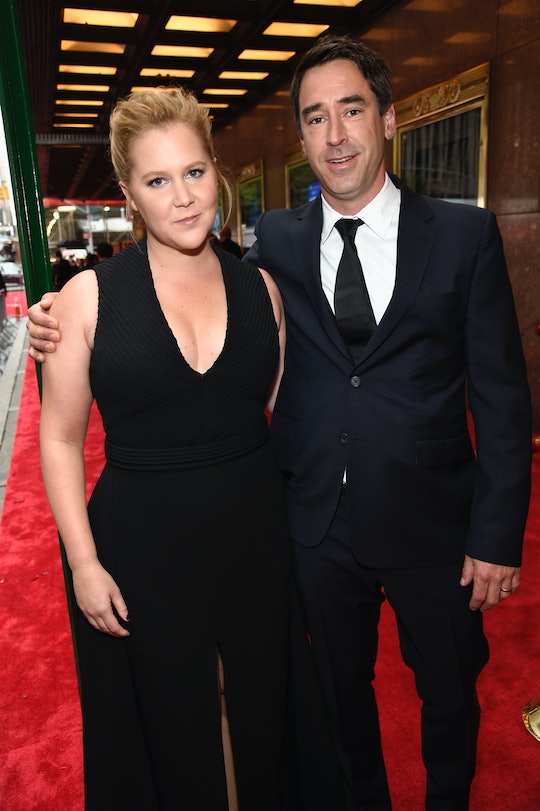 When they were married in 2018, Amy Schumer made headlines for her X-rated vows she made to her husband Chris Fischer at their Malibu wedding. Now three years later, the two are parents to son Gene, who turns 2 years old next month. And things have changed. In a chat with comedian and actor Kevin Hart for his podcast Comedy Gold Minds, Schumer revealed her sex life as a mom of a toddler is looking vastly different from those before times. Not to be presumptuous, but I think I just heard the faint sound of moms snickering softly to themselves all over the world.

The Trainwreck star and her chef husband welcomed Gene in May 2019, and unsurprisingly, becoming parents has made an impact on their sex lives. "Okay, truly, we probably have sex every seven to 10 days," Schumer told Hart. “And we do it and we go, 'God, that's so great. Like, we need to do that more.' And then we don't do it again for another seven to 10 days."

To be fair to Schumer and Fischer, if having sex once a week or so keeps them loving and close, then that’s enough. It’s all about intimacy and trust right? Besides, parenting isn’t the only element that has changed their sex life. It’s also her husband. "This happened the other day," she told Hart. "I go, 'Do you want to have sex?' And he makes this face...like, he kind of pictured it and winced."

He made a counter offer to have sex the next day. Her answer? “Great. Thank you. I feel really good.”

Amy Schumer opened up about her sex life as a mom.

If you’ve ever seen an episode of Amy Schumer Learns To Cook on the Food Network, you’ve probably gotten some insight into her relationship with Fischer. They are funny and warm and loving even as they constantly tease each other. Intimacy comes in all shapes and sizes, and let’s face it. Sex after giving birth changes for moms for a whole host of reasons. Exhaustion, being touched out, and then there are the changes to your body. Or as Schumer so succinctly put it to Hart in that same interview, her vagina has changed, “It’s honestly just like, huge now and just garbage. It’s just street trash. Yeah, I would say my street trash p—-y is probably [the biggest change." So there is that.

The upside? Schumer now has a little boy who is funny and sweet and apparently only wears tap shoes around the house. This is parenting — you might find yourself having less sex, but you also get a great little human out of the deal.