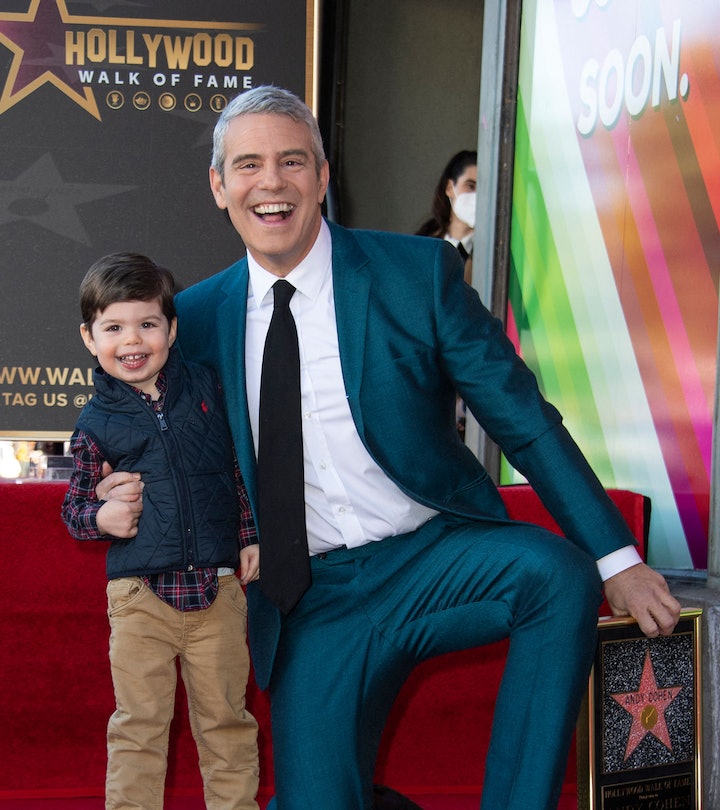 They grow up so fast!

Despite his association with the over-the-top, luxurious world of The Real Housewives, Andy Cohen, dad to Ben, 3 and Lucy, 7 months, likes to keep it simple during the holidays. Hanukkah is coming up, and Cohen says it’s the lowkey, cozy traditions that everyone is most looking forward to. “I don't think it takes too much to make things extra festive,” he tells Romper. “Kids have pretty low expectations. You can buy a string of lights and it feels like a party and I think kids can latch onto that. I don't think you need to go overboard.”

I talk to Cohen by Zoom. He sits in a room that definitely isn’t overboard, but it is indeed festive. A Christmas tree, a yule log on the TV behind him, a charmingly decorated mantle, complete with menorah. Simple, yes, but particular, he assures me.

“I just like everything how I want it,” he explains. “I’m someone who likes a routine, which is why I have a routine with my Alexa,” Cohen, who recently partnered with the smart device brand, says. “Watch. Alexa: let’s get lit!” Holiday string lights illuminate the room, from the mantle to the wall to the fully-trimmed tree.

The tree might raise a few questions for some. Cohen is proudly Jewish, and while many Jewish families have incorporated Christmas accoutrement into their end-of-the-year cozy vibe, a tree is not at all something he was raised with. Its inclusion is an example of life imitating art.

“I integrated a fake tree into my life, sometime during the run of Watch What Happens Live,” he explains. “We had a fake tree on the set and when we would break for the Christmas holidays, I would have my PA bring the tree to my apartment and set it up.”

It was also something he felt he needed to explain and reassure to his parents, Evelyn and Lou. “I said ‘Look, it’s not mine! I borrowed it!’’” he laughs. “And then I was like, ‘Screw it. I'm buying a fake tree!’” He shrugs. “It means nothing to me anyway, so it's just festive.”

Lest his parents feared he was forgoing family traditions for new ones, he assures me his son Ben has gotten really into Hanukkah. “He loves lighting the menorah,” he says. “The other day he asked when does Hanukkah start? That he knows and looks forward to that is enough for me."

Lucy’s a bit young to understand inveterate holiday traditions, but it’s safe to say that if Ben likes it she does, too. “When I'm in the room with Lucy and Ben is also there, it's like I'm invisible,” Cohen says. “She cannot take her eyes off of him. I think that's great and a beautiful sign for things to come.” Fortunately, the feeling is mutual — the “threenager” (we have a quick discussion on the awe-inspiring nature of toddler tantrums) is super affectionate and “just loves the idea that he has a sister.”

His children have infused new life into his appreciation of the holidays, he says. The cookies, decorating the “fake” tree, lighting the menorah, watching Snoopy specials. “The kids make me feel different, about everything,” he says earnestly. “They've totally reframed my thought process on everything and they make me feel like my home is a home for the first time. I think my home used to be kind of a show place and a place that I could hang out, it was a place that I could entertain. But now, it truly is our home and especially at the holidays.”

Mornings (and everything else) have gotten cozier at Cohen’s house...

Of course there’s one more holiday tradition Cohen and Co. are looking forward to this season.

“They'll be allowed to watch 10 minutes of me and Anderson [Cooper] on New Year's Eve,” he jokes.

Because, yes, kids infuse the holidays with magic... but some holiday traditions are best left to the grown-ups.