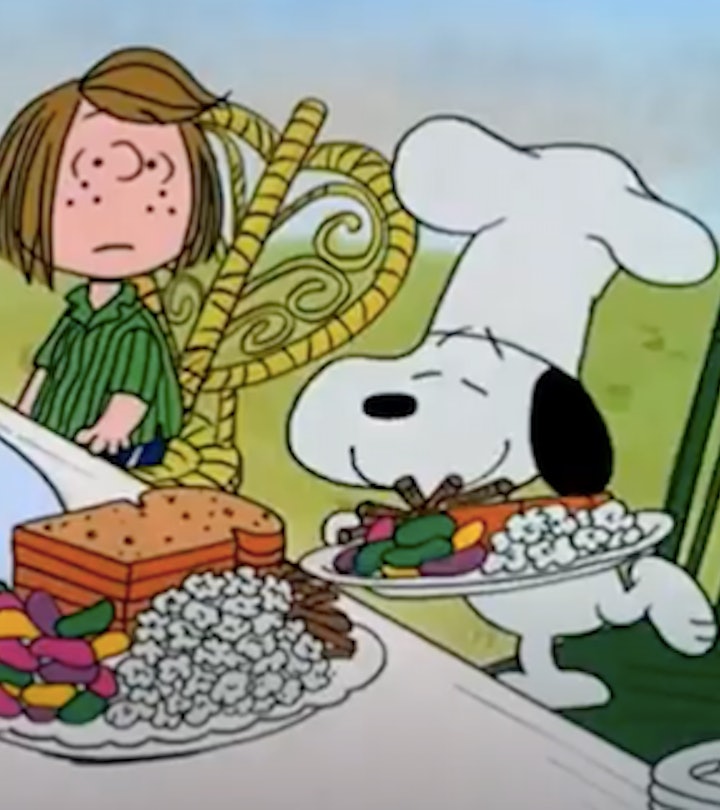 How To Watch A Charlie Brown Thanksgiving In 2022

Nothing says Thanksgiving quite like a classic cartoon movie filled with friendship, food, and fun. A Charlie Brown Thanksgiving is the perfect excuse to cozy up on the couch after that last bite of dessert and watch a sweet holiday treat that every member of the family can enjoy. In this delightful Peanuts special, Charlie Brown might think he’s heading over to his grandmother’s to stuff his face with some green bean casserole, but that still doesn’t stop Peppermint Patty from inviting everyone over to his house for a festive Friendsgiving. While Snoopy certainly has some original ideas for what to put on the menu, he’ll also entertain his legions of adoring fans with an epic ping-pong match — against himself! (Who needs football anyway?) An annual viewing of this special is a tradition for many, so here’s everything you need to know to watch A Charlie Brown Thanksgiving in 2022.

You can stream A Charlie Brown Thanksgiving on Apple TV+ all year long.

If you’re looking to wash down that yummy pumpkin pie with a nostalgic Charlie Brown holiday movie, Apple TV+ is the only way to go. The streamer not only has exclusive rights to the special, it’s also treating Peanuts-lovers everywhere to a free viewing!

A Charlie Brown Thanksgiving will stream for free for a limited time.

Don’t have a subscription to the streaming service? You’re in luck. Apple TV+ announced that it will provide a special free window for non-subscribers to stream the iconic holiday special available Nov. 23 through Nov. 27. Or if you’re interested in a whole week of holiday watching, you can also check out a free seven-day trial or opt into a paid subscription starting at $6.99 a month.

To whet your appetite, Apple TV+ shared a video called “Winner Winner Turkey Dinner” on its YouTube channel. The little snippet shows Snoopy and Woodstock feasting on some holiday grub against the backdrop of some jazzy tunes. The adorable animal duo also engage in some fun holiday traditions, like splitting a wishbone, which then sends the poor little birdie flying for miles across the sky.

Will A Charlie Brown Thanksgiving air on TV in 2022?

While PBS had previously aired A Charlie Brown Thanksgiving on TV, unfortunately, that’s not an option this holiday season. In a recent tweet, PBS announced that it will no longer air any of the Peanuts specials. Since 2020, Apple TV+ gobbled up all the rights to all the Charlie Brown specials, much to the chagrin of fans of the cartoon franchise. Those who watched the movie as part of their Thanksgiving celebration were down right outraged that the holiday classic would not be broadcast on television for the first time since the ‘60s.

But... Apple TV+ is not only offering up the free stream, the streaming platform is also releasing other holiday movies too. It’s the Great Pumpkin Charlie Brown and A Charlie Brown Christmas, will also be available for bupkis for a limited time. This year’s Apple TV+ holiday line-up also expanded to include I Want a Dog for Christmas and Charlie Brown’s Christmas Tales, too.

There are still other ways to watch A Charlie Brown Thanksgiving.

Even if you don’t have a subscription to Apple TV+ or if you miss the window for the free show, you’ll be thankful if you still have that DVD player hooked up for this exact kind of movie emergency. Amazon is currently selling the Peanuts holiday classic for $13.99. Best Buy also carries the 40th anniversary deluxe edition of the 1973 movie for $11.99.

So after you’re done with your third helping of stuffing, why not steal a move from Linus’ playbook and grab your coziest blanket. Head on over to the couch and stream A Charlie Brown Thanksgiving for free while you still can. And then go ahead and polish off that last piece of pumpkin pie. You deserve it.