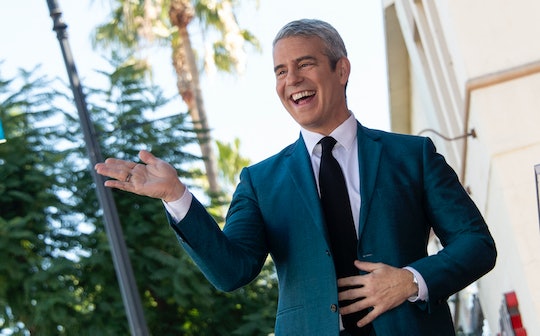 Ben is going to be the best big brother ever!

Andy Cohen was thrilled to announce the spring birth of his daughter Lucy Eve via surrogate on Friday, April 29. The Cohen crew can officially boast two carseats as Cohen is already the proud father of 3-year-old son, Ben. The Bravo host announced the exciting announcement on social media, with several recent posts to Instagram of baby Lucy making her big debut. But it was Cohen’s most recent picture of Ben planting a sweet little kiss on his little sister’s face that has officially taken this baby announcement into Cuteness Overload.

In the most precious Instagram picture, Cohen’s toddler was seated in adorable overalls and ever so carefully bent down to smooch baby Lucy, who looked incredibly alert with opened eyes. “When Ben met Lucy,” Cohen captioned the post.

Famous pals and parents like Kelly Ripa, Amy Schumer, and even supermodel and new mom Naomi Campbell all dropped piles of loving wishes and heart-filled emojis in the comments under the latest photos. Cohen’s musical bestie, John Mayer, also wished his BFF well, prompting several of Cohen’s followers to get in on the fun and bestow upon the crooner the new nickname, ”Uncle Johnny.”

In the original birth announcement, Cohen was all smiles as he snuggled his baby girl and cradled her close to his chest. “HERE’S LUCY!!!!! Meet my daughter, Lucy Eve Cohen! She’s 8 pounds 13 oz and was born at 5:13 pm in New York City!!! Her big brother can’t wait to meet her!”

Cohen, who is known for wrangling all the Real Housewives and hosting his boozy, Bravo late-night talk show, also took the time to express his gratitude and continue to champion surrogacy, as both his children came into the world this way. “Thank you to my rock star surrogate (ALL surrogates are rockstars, by the way) and everyone who helped make this miracle happen. I’m so happy,” Cohen added.

The gushing dad continued to share his joy as he followed up with another sweet Instagram snap of tiny Lucy in her hospital bassinet. “Greetings from Cloud 9 #ILoveLucy,” Cohen captioned the post as he gazed upon his first daughter, snug as a bug in a rug, dressed in a bow hat and striped swaddle.

Cohen is in for some tears and sleepless nights that could easily beat the drama of any reality show, as making the leap from a parent of one kid to two can be absolute chaos. Good thing, he can always turn to fellow famous dad of two, Anderson Cooper, for advice on keeping your sanity when you double your family.

More Like This
Meghan Markle Made A Sweet Little Tribute To Her Daughter Lilibet
Chris Pratt & Katherine Schwarzenegger Welcomed A Baby Girl With The Prettiest Name
Ray Liotta Has Died At 67. Not Only Was He An Iconic Actor, He Was A Proud Dad.
Heidi Klum's Daughter Leni Wore Her Mom's Dress From 1998 To Prom