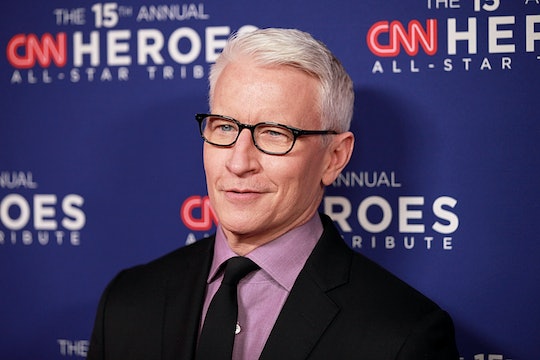 “He already seems like a wise and thoughtful little chap.”

Anderson Cooper is a father of two now. The 54-year-old CNN anchor welcomed a baby boy via surrogacy, Sebastian Luke Maisani-Cooper, with his former partner and current co-parent, Benjamin Maisani.

The Anderson Cooper 360 host announced the happy news on his show last night and recalled how he announced the birth of his son, Wyatt, during the “early dark days of the pandemic” in April 2020.

“These are the pictures I showed of Wyatt then, taken just days after he was born,” Cooper said. “This is Wyatt today. He is nearly 22 months old. He is sweet, funny, and the greatest joy of my life. If he looks particularly happy in this picture, it's because he now has a baby brother. His name is Sebastian, and I would like you to meet him.”

Cooper, who is also the host of a new parenting show, added that Sebastian was born, weighing in at 6.8 pounds, and is healthy and happy and his ‘occasional hiccups’ are adorable to him.

Like any newborn, “He mostly just sleeps and eats and certainly poops, but he already seems like a wise and thoughtful little chap,” Cooper added.

Wyatt and Sebastian will be raised by both Cooper and Maisani, whom Wyatt calls ‘daddy’ and ‘papa.’ Cooper also shared that Maisani is in the process of adopting Wyatt so the toddler’s last name will soon be Maisani-Cooper. Wyatt, by the way, has since embraced his big brother role. Cooper shared that the 22-month-old helped his dad put together Sebastian’s crib and calls his little brother by his middle name, Luke.

Cooper also took a moment to thank their surrogate, her family, and the doctors who helped bring Sebastian into the world.

“We want to thank the amazing doctors and nurses who helped bring Sebastian into the world and most of all thank the surrogate who carried Sebastian and gave birth to him,” he said. “The sacrifices she and her entire family made and the love that they gave Sebastian this past year has been extraordinary.”

He went on, “We’ll never forget the kindness of all of her and her family and all surrogates who help bring new life and new love into the world.”