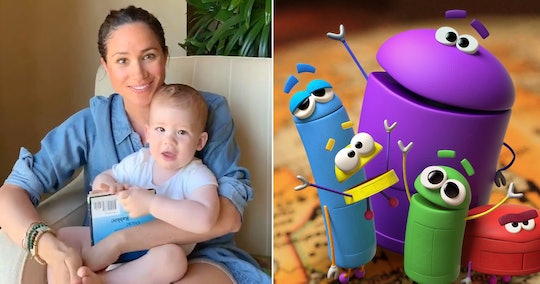 Save The Children/ Netflix

She’s been known to break out the StoryBots T-rex rap.

Meghan Markle is absolutely the mom of a toddler. How can you tell? She lights up when talking about her 3-year-old son Archie’s favorite television shows. What’s more, she can even bust out the rap from StoryBots about dinosaurs.

The mom of two recently spoke to Variety and gave a little backstage pass to what life is like with Archie and his 1-year-old sister Lilibet. Specifically which shows they watch. While she noted that “Lili” is not watching television yet, things are different for her big brother.

“Archie, he’s loved Octonauts for a really long time,” Markle said with a big grin on her face. “It’s amazing. He’s getting into more throwback shows. Like Magic School Bus. Who would have thought? He thinks it’s great. So it’s been really fun getting to see it again through his eyes.”

Magic School Bus originally ran from 1994 to 1997, which would have presumably been a shade too late for Markle herself as she would have been a teenager at the time. So it must be fun for her to enjoy this time around. And it’s not the only show she enjoys watching with Archie. Or perhaps more accurately, singing along with Archie.

Both she and Archie have become big fans of Ask The StoryBots on Netflix, so much so that Markle has “become that mom where I’m sitting around with friends and then I start singing like, ‘Tyrannosaurus, that’s the chorus,’ and then I’m like ‘what am I singing? Oh my gosh, I’m singing StoryBots.’ I’m not singing Beyoncé in that moment. I’m singing StoryBots.”

Both of Archie’s parents are big fans of watching his programs with him. Back in April, Prince Harry gave a speech at the outset of the Invictus Games in the Netherlands where he talked about his son’s love of the British animated series, The Octonauts. “When I talk to my son Archie about what he wants to be when he grows up, some days it’s an astronaut, other days it’s a pilot. A helicopter pilot, obviously. Or Quasi from Octonauts,” Prince Harry said at the time. “If you’re laughing, then you’ve seen it.”

All of this has me wondering who loves these kids’ shows more, Archie or his parents?