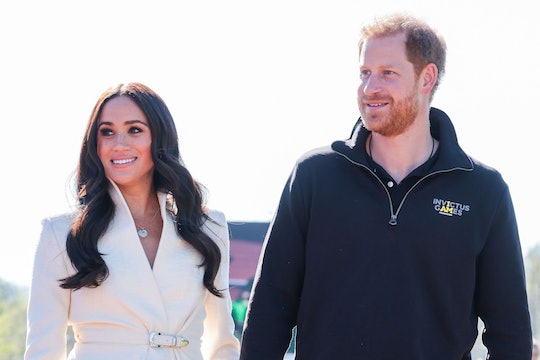 It goes back to his British roots!

Prince Harry and Meghan Markle’s son Archie is not yet 3 years old, but he is already thinking about what he wants to do when he’s a grown up. Maybe because he’s getting inspiration from his favorite television series. During a visit to the Hague to support athletes at the Invictus Games, Prince Harry told the crowd that Archie’s favorite TV show is a popular British series. And the little boy is looking to one character in particular as a possible career track.

The Duke and Duchess of Sussex traveled to the Netherlands for the Invictus Games over the weekend, leaving Archie and his 11-month-old sister Lilibet “Lili” Diana behind at home in California. But their little ones are clearly not far from their minds. Prince Harry gave a speech at the Invictus Games and talked about his son Archie’s vision for his future, based very much on his favorite television series, Octonauts.

“When I talk to my son Archie about what he wants to be when he grows up, some days it’s an astronaut, other days it’s a pilot. A helicopter pilot, obviously. Or Quasi from Octonauts,” Harry said. “If you’re laughing, then you’ve seen it.”

Octonauts is a British animated series, which you can stream on Netflix, featuring a team of brave underwater explorers trolling the ocean floor and looking for sea creatures who might need their help. Archie’s favorite character Quasi is a brave cat with a British accent, which could well remind the little boy of his first few months on Earth, living in the United Kingdom and hearing those accents everywhere, not just from his dad.

While Archie is pretty focused on his future career choices, his dad makes sure to keep him focused on the importance of being a good person and not just a brave cat. “What I remind him,” Prince Harry said in his speech, “is that no matter what you want to be when you grow up, it’s your character that matters most.”

Archie could well get the chance to hear so me more British accents like his dad’s and the Octonauts this summer, as his great-grandmother Queen Elizabeth has reportedly invited the whole family to her platinum jubilee celebrations at Buckingham Palace, The Daily Mail reported. Prince Harry and Meghan visited the Queen on their way to the Invictus Games over Easter weekend and reportedly told her that they would be bringing their two children to the UK this summer.

More Like This
Meghan & Harry Celebrated Their Anniversary As A Family Of Four For The First Time
Why Prince Harry Feels Lucky To Be A "Father With A Platform"
Prince Harry Is A Proud Girl Dad & He’s Got The T-Shirt To Prove It
Kate Middleton Explains Why Her Kids Couldn't Attend The Top Gun: Maverick Premiere